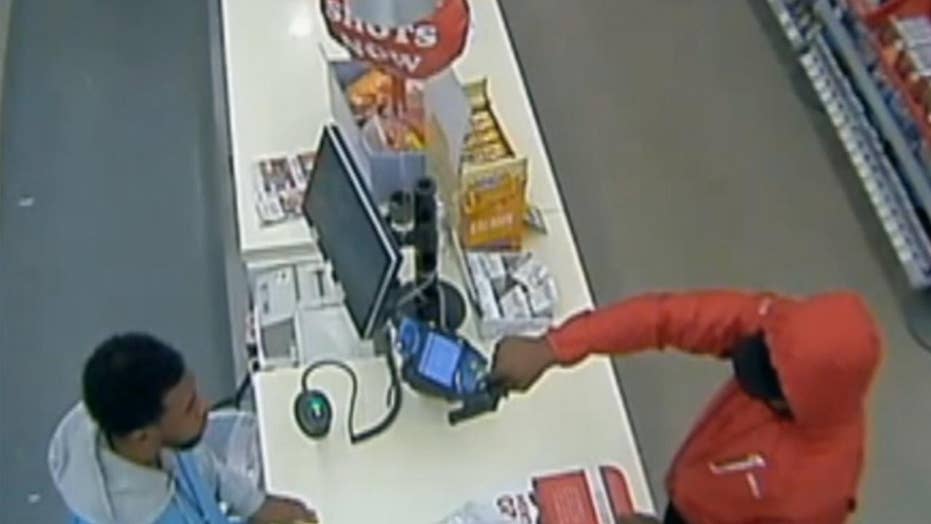 A man’s nerves of steel foiled an attempted armed robbery at a Walgreens in Florida.

The Broward County Sheriff’s Office said an unidentified man using a red hoodie to obscure his face from security cameras entered a Walgreens in Weston on Monday afternoon. He grabbed some candy and ice cream before making his way to the cash register.

As the employee rang up the items, the thief pulled out a handgun, pointed it at the clerk and demanded money.

MISSOURI MAN KILLED TODDLER BECAUSE SHE WOULDN’T PUT ON HER PAJAMAS, COPS SAY

“The stoic clerk stood in quiet resistance,” the sheriff’s office wrote in a press release. “He didn’t speak. He didn’t move. He simply stared back at the armed man, almost expressionless.”

The security footage shows the thief making the demands again, but the clerk remained defiant.

Moments later, the thief grabbed the shopping bag and fled.

The sheriff’s office spokesperson, Gina Carter, told WSVN that while the stare-down worked this time, it is best to comply with the robber to ensure safety.

“Even this kind of quiet resistance is dangerous, but luckily for this clerk, it worked out in his favor,” she added.

The suspect is described as a male in his 20s with a dark complexion. He is about 5 feet 9 inches tall and weighs about 150 pounds. He wore a red Columbia hoodie and a baseball cap.