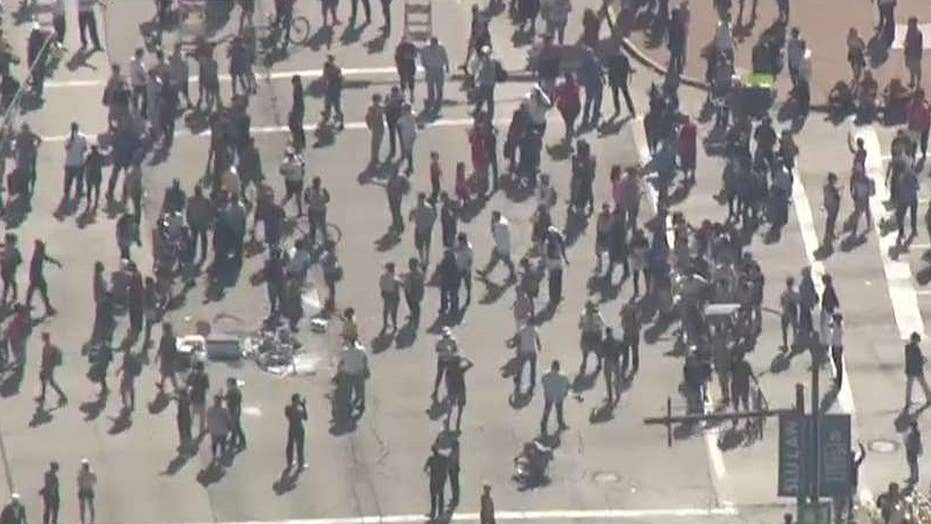 A St. Louis cop is accusing his own police department of pummeling him while he was working undercover during a protest in 2017 – and then trying to cover it up.

Detective Luther Hall’s lawsuit filed this week in U.S. District Court alleges that his colleagues slammed him down twice and then beat him with batons and fists days after former officer Jason Stockley was found not guilty of killing a black man, the St. Louis Post-Dispatch reports.

The lawsuit claims Hall was working undercover in a crowd of people who were protesting the acquittal of the white officer. The protesters damaged windows and flowerpots before – without any audible warning or justification -- responding officers started using pepper spray and bean bag rounds to get them to disperse, the suit added.

During those moments, the lawsuit says, Hall had his hands up and was instructed to get on the ground when he allegedly was attacked.

Hall was removed from the scene and given medical treatment after a SWAT officer recognized him. But police -- in an apparent cover-up attempt -- never made any documentation of the arrest, the St. Louis Post-Dispatch reported, citing the lawsuit.

The alleged beatdown is said to have left Hall with several herniated discs and a jaw injury that has inhibited his ability to eat – and he has not returned to the job since.

The lawsuit’s allegations mirror claims federal prosecutors made against those four officers in a December indictment, which says they attacked Hall while arresting him without probable cause, the newspaper adds.

So far, Colletta has pleaded guilty to one federal charge and has admitted to lying to the FBI and a grand jury about the nature of Hall’s arrest, while the other three officers have pleaded not guilty and are set to head to trial later this year.

Colletta faces at least 30 months in prison at her sentencing hearing this December, it added.