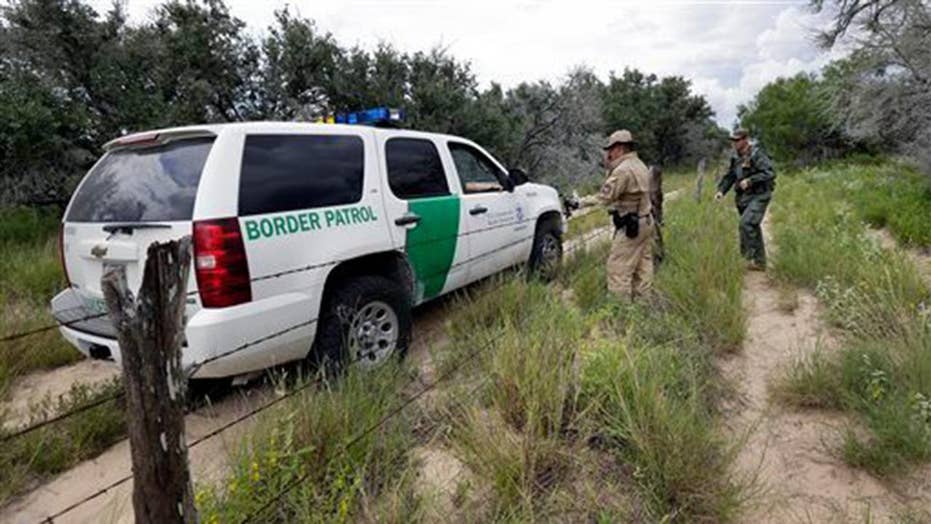 The number of immigrants who were apprehended while attempting to cross the U.S.-Mexico border illegally or who were deemed inadmissible at a port of entry last month increased by 60 percent from the same period in 2017, according to numbers released Thursday by the Department of Homeland Security.

The numbers were released as Congress gears up for another funding fight over President Trump's proposed border wall. The president has demanded that an upcoming bill to fund the government past Dec. 21 include at least $5 billion for his proposed wall, something Democrats have rejected.

Honduran woman believed to be the first migrant caravan member to have a child in the U.S. after scaling the border wall with her family; CRTV host Michelle Malkin reacts.

"The November 2018 border numbers are the predictable result of a broken immigration system – including flawed judicial rulings - that usurps the will of the American people who have repeatedly demanded secure borders," DHS spokeswoman Katie Waldman said in a statement. " ...The President has made it clear: these violations of law will not stand. We will enforce our laws to the maximum extent possible ...

"We will continue to push Congress to step up and confront these legal failures," Waldman added. "If Congress once again kicks the can down the road and refuses to close the well-known and devastating loopholes and fund the President’s wall it will be a continuation of a decade’s long dereliction of duty."

Thousands of migrants have come up from Central America in recent weeks as part of caravans. Last month, Trump used his national security powers to put in place regulations that denied asylum to anyone caught crossing illegally, but a judge has halted that change as a lawsuit progresses. The president has repeatedly said the wall is needed to stop an "invasion" of migrants and others seeking to cross into the U.S. illegally.

House Minority Leader Nancy Pelosi, D-Calif., said Thursday that the lame-duck Congress should pass a half-dozen government funding bills that key committees have already agreed on, along with a separate measure funding DHS. Funding for the homeland agency should address border security and does not necessarily include a wall, Pelosi said.

Pelosi: No DACA deal in exchange for border wall funding

Senate Minority Leader Chuck Schumer, D-N.Y., said Thursday that a bipartisan Senate plan for $1.6 billion in border security funding does not include money for the 30-foot-high concrete wall Trump has envisioned. The money "can only be used for fencing" and technology that experts say is appropriate and makes sense as a security feature, said Schumer, who called the wall "a nonstarter" for Democrats.

Schumer called the spat over the wall unnecessary, noting that the administration has not spent more than $1 billion approved for border security in the budget year that ended Sept. 30. "The idea that they haven't spent last year's money and they're demanding such a huge amount this year makes no sense at all," he said.

Sen. Roy Blunt, R-Mo., said the key question is whether Trump will sign a bill without funding for the wall.

"It doesn't matter how much appetite there is for a shutdown anywhere else if he is willing to have a shutdown over this issue," Blunt said. "He has given every indication that he would."