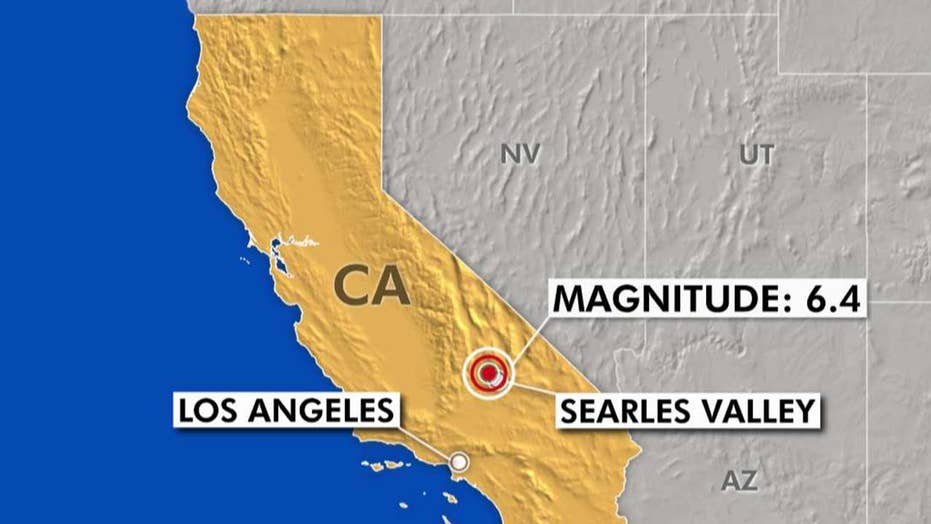 A Fourth of July earthquake is recorded northeast of Los Angeles.

A 6.4 magnitude earthquake rattled parts of Southern California and Nevada on Thursday morning.

The quake occurred about 7 miles outside Searless Valley, located about 130 miles east of Bakersfield and about 200 miles west of the Nevada border, according to the U.S. Geological Survey.

Swarms of smaller quakes occurred immediately after the 6.4 magnitude tremblor struck the region. Several people took to Twitter to report that the felt the shaking. However, there were no immediate reports of injuries or damage from the quakes.

A 6.4 earthquake occurred near Searless Valley, Calif., according to the USGS. (USGS)

The Los Angeles Fire Department asked resident not to call 911 over the earthquake but only to report injuries or damage. Fire officials said they were in earthquake mode as a result of the tremblors.

“All 106 fire stations are out conducting a strategic survey of their districts to determine if any damage exists,” the fire department said in an alert. “Once this process is complete, an overall assessment of the impact in the City of Los Angeles will be compiled by Headquarters.”

The Los Angeles Police Department said it had not received any reports of damage or calls for help.

The San Bernardino County Fire Department said it was conducting an assessment as well.

FOX Sports’ Colin Cowherd was on the air when the quake struck. His Los Angeles studio apparently felt he shake.