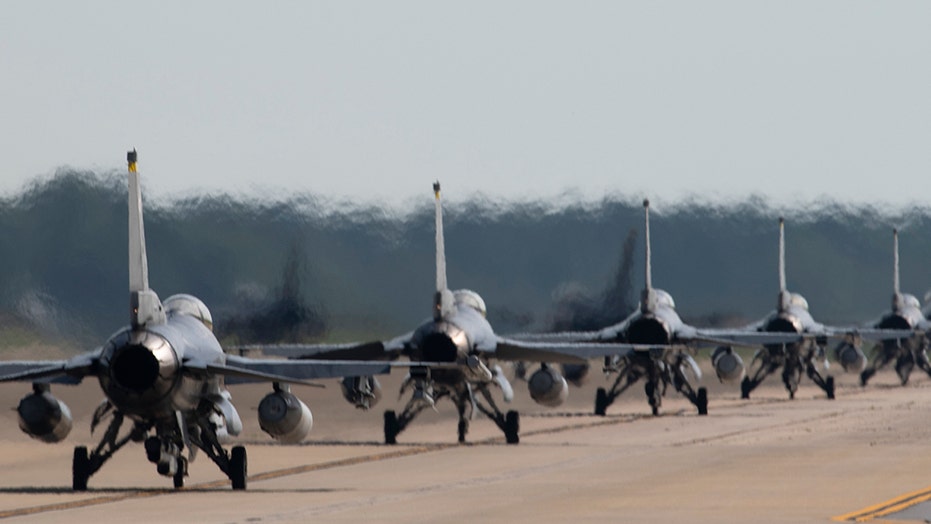 Shaw Air Force Base in South Carolina is planning a tactical stand-down over three days in August and September to help those at the base "recharge" following the suicides of three airmen in the past year and the alarming uptick in Air Force suicides throughout the U.S.

Second Lt. Christopher Rhoton, 35, Justin Strickland, 26, and Jose Llanes, 28, all committed suicide at the base this year, according to Sumter County Coroner Robert Baker, while 79 suicides have occurred in the Air Force from January to July 2019.

Those 79 deaths were nearly twice as many compared to this time last year and officials fear 2019 could be the deadliest in history, according to the Post and Courier. The military branch also recorded about 100 suicides per year over the past 5 years.

U.S. Air Force F-16 Vipers assigned to the 20th Fighter Wing taxi on the runway at Shaw Air Force Base, South Carolina. The base is planning two days off to promote mental health in August and September.  (U.S. Air Force)

Air Force Col. Derek O'Malley of Shaw Air Force Base posted a video on Facebook Wednesday detailing their plans to allow Air Force personnel time to recharge their batteries during a Resilience Tactical Pause (RTP) at the base.

“I’ve directed our commanders to take a hard look at our schedules," O’Malley said. “No doubt there are times where our country needs us to really push it forward, demands a lot of us and our mission, but there are times also where we can really pull it back. And we need to proactively identify those times so that we can rest up and be ready for when our nation really needs us.”

The RTP schedule includes days off on Aug. 30 and Sept. 20, as well as a guest speaker on Sept. 13, before they break into small groups later in the day to help promote dialogue about mental health.

“We lose more airmen to suicide than any other single enemy, even more than combat,” Kaleth Wright, chief master sergeant of the Air Force told the Post and Courier. “If we don’t do something, we could lose up to 150, 160 airmen in 2019.”

An airman works on a military jet at Shaw Airforce base in South Carolina. The base is planning two days off to promote mental health in August and September following a string of suicides at the base. (U.S. Air Force )

Wright isn't able to pinpoint the exact reasoning for the uptick in suicide rates this year, although he says some common examples include relationship problems and discipline issues.

O'Malley shares the sentiment of Wright and says while there isn't one solution, they are doing what they can to help out their fellow brothers in need.

"While there isn’t one big solution, there are a thousand little ones, including giving more time back to airmen, said O'Malley. "Whether through a few more designated days off or by adjusting our ops tempo, we are going to take this time to recharge, engage and #BeThere for each other."