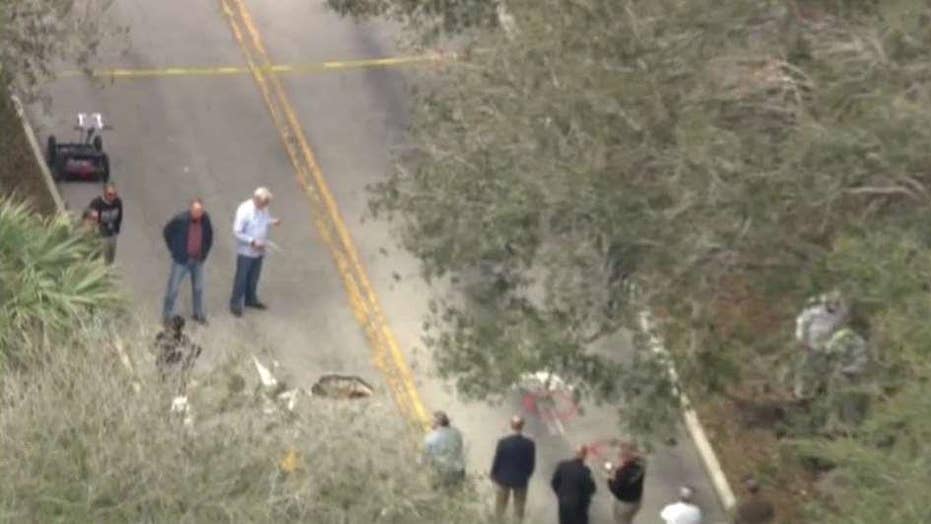 What drivers believed to be a large pothole in Pembroke Pines, Florida, turned out to be a hidden underground tunnel about two feet in diameter; Phil Keating reports.

What drivers believed to be a large pothole in the middle of the road in Pembroke Pines, Florida, turned out to be a hidden underground tunnel that authorities believe may lead to a nearby bank.

The FBI has joined local police in an investigation into the newly discovered tunnel, which reportedly stretches about 50 yards. It's at least two feet in diameter.

Police officers were responding to a concerned driver's call about a hole in the road close to a Chase bank on Flamingo Road and Pines Boulevard Wednesday afternoon when they made the shocking find, WSVN reports. Authorities told the news station it appears the start of the tunnel is located in a wooded area close to the bank.

According to WPLG, part of the entrance of the tunnel was hidden by a wooden pallet. When they removed the piece of wood, police said they found a pair of mud-covered boots, a ladder, a small electric generator, electrical cords and other tools.

"The only thing I've ever seen like this is in the movies. This is truly a unique case here."

"The only thing I've ever seen like this is in the movies. This is truly a unique case here," FBI spokesman Mike Leverock said of the discovery. "It's very small, very claustrophobic."

Investigators said the tunnel appeared to be dug by hand using tools such as a pickaxe, with a small wagon used to transport dirt and rock outside, Leverock added.

Video of the scene shows officers examining the hole which is now blocked off. Officials plan to dig up the tunnel to better understand its purpose.

"It's going to be a while. We're going to dig up the whole thing," Leverock said, noting officials have brought in heavy construction equipment to speed up the process.

The Chase branch said it would remain open, though its drive-through will be temporarily closed as officials continue to investigate the matter.

It remains unclear if someone was trying to rob the bank and no suspects have been identified at this time. A cadaver dog determined there were no bodies inside the tunnel.

The FBI asked anyone with information about the tunnel or anyone who may have noticed people in the area during the night to contact the bureau's South Florida field office at 754-703-2000.