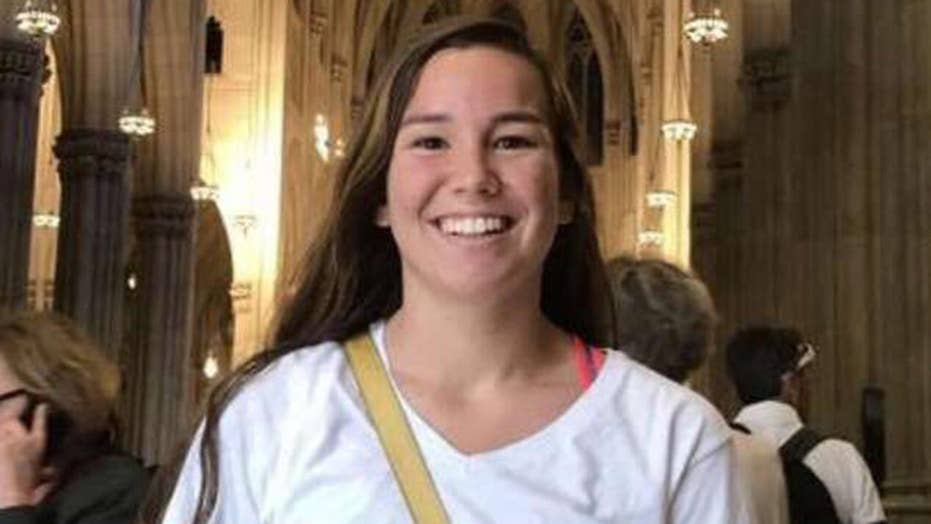 Mollie's mother, Laura Calderwood, said "as of 10 this morning we have raised $172,000 that would be paid to you as soon as Mollie is safely home.

“We believe Mollie is still alive and if someone has abducted her we are pleading with you to please release her," she added, echoing past calls from family members for the public to come forward with any information.

The reward is being offered through a fund set up at a local bank in Brooklyn, Iowa, where Tibbetts was last seen on July 18, and officials expect the amount to grow as donations come in. The Crime Stoppers of Central Iowa has posted forms on their website for those interested in donating.

The desperate search for the University of Iowa sophomore has led investigators to question a pig farmer who reportedly twice pleaded guilty to stalking, while a suspect in an assault on a jogger in another Iowa city and a man seen surreptitiously snapping pics of young girls on a run have also been analyzed for any possible connections.

But, so far, cops have come up empty.

On Wednesday, a pig farmer in the area told Fox News seven FBI investigators arrived at his home last Friday and asked to search it without a warrant.

Authorities probed the property for nearly two hours, taking photos of the interior of the home and also searching the man's garage. The farmer said investigators asked to interview him off the property and kept his cell phone overnight to check his records. He added he “has nothing to hide” as cops search for Tibbetts.

WHO-DT reported that the farmer said in an interview that he doesn’t know the family and hopes Mollie is tracked down soon.

"I don't know who those two [officials] were but they took me down to the fire station Tuesday and questioned me for two hours,” the farmer said. "I don’t remember what they asked me.

He added: “I just thought it was a waste of time, but, oh well."

WHO-DT, citing Iowa court documents, also reported that the farmer has entered guilty pleas for two instances of stalking – one in Poweshiek County in 2009 and another in Marion County in 2014. The station named the farmer late Wednesday, but he spoke to Fox News on the condition that his identity would be withheld.

Police have not identified any suspects in the case.

Rob Tibbetts, her father, says he hopes the reward will be a "financial incentive" for people to come forward with information that they may otherwise be hesitant to reveal.

"I'm thinking she is [alive] somewhere," Rob Tibbetts told Fox News on Thursday. "I'm thinking someone made a horrible mistake and they don't know what to do."

The search for Mollie Tibbetts has involved numerous law enforcement agencies on the local, state and federal levels – and for the first time Wednesday appeared to cross state lines as police in Kearney, Missouri, said they investigated a possible Tibbetts sighting.

“The Kearney Missouri Police Department did respond to a possible sighting on 7-26-2018 at a truck stop within our jurisdiction,” Sgt. Joe Kantola said in a press release. “Officers conducted a thorough search of the area, spoke with all possible witnesses, and reviewed all available video footage. A report was sent to the investigating task force regarding this possible sighting.”

Mollie was last seen when she left her boyfriend’s home to jog on the evening of July 18. The boyfriend, Dalton Jack, shares the house with his brother and his brother's fiance, and Tibbetts was staying there to watch Jack's dogs while he worked in Dubuque. Police have formally cleared Jack, who was in Dubuque at the time Mollie vanished.

Police in Dubuque, which lies on the state’s border with Wisconsin and Illinois, said Wednesday they arrested a man accused of assaulting a jogger earlier this week – although as of now, the case currently has no known ties to Tibbetts’ disappearance.

Assistant Police Chief Jeremy Jensen told Fox News the jogger had stated to investigators she was running near the city's fire station on Sunday night when she was approached by a man who had offered her flowers and tried to grab her.

“The male subject, later identified as Greg Thomas Langel, 22, of Dubuque, grabbed the female victim’s arm when she refused to give him her phone number,” the police department said in a statement. “She was able to pull her arm away and kicked Langel when he tried to grab her again.”

The department said they tracked a suspicious vehicle observed by traffic cameras in the area of the reported assault back to Langel, who made “limited admissions about the incident.” He has been charged with simple assault and was taken into custody Wednesday on a warrant.

In Pella, about an hour’s drive away from Brooklyn, police said Tuesday they took a man in for questioning after he was captured on surveillance footage last Friday taking pictures of female joggers.

Pella Lt. Shane Cox told Fox News that during questioning the man revealed why he had taken the photos, but Cox said he would not disclose that information.

“I’ve got the detectives fact checking everything he’s given us," Cox said. "At this point there are no criminal charges." And, Cox added, he doesn't expect there to be any charges.

Cox also told Fox News on Tuesday his department has been in contact with the Poweshiek County Sheriff’s Office regarding the case but have not found it in any way linked to Tibbetts’ disappearance.

Tibbetts’ father, brothers Jake and Scott, and her boyfriend have urged the public in a series of wide-ranging, exclusive interviews with Fox News Channel to send in tips to police.

“Just think. Think about what you saw and call the authorities. I really think that’s how we are going to get Mollie back. I really do,” Rob Tibbetts told Fox & Friends early Thursday morning.