Headlines proclaim rising floodwaters have left Wilmington, North Carolina “cut off” from the rest of the world. While largely true, my crew and I managed to find a roundabout way of driving back to our home base in Atlanta.

Producer Chip Bell, photographer Cappy Cochran and I had spent nearly a week on Wrightsville Beach. Reporting live from outside our vacation-rental condominium, we experienced the heavy winds of Hurricane Florence’s eye wall, marveled at the eerie calm of the eye of the storm and then got battered by the eye wall once again.

Despite being in the direct path of the storm, Wilmington Beach was spared much of the damage and flooding experienced by other North Carolina communities.

After finishing our early morning reporting shift on Sunday, it was time to go home.

But we didn’t get much farther than Wilmington before floodwaters blocked our route. 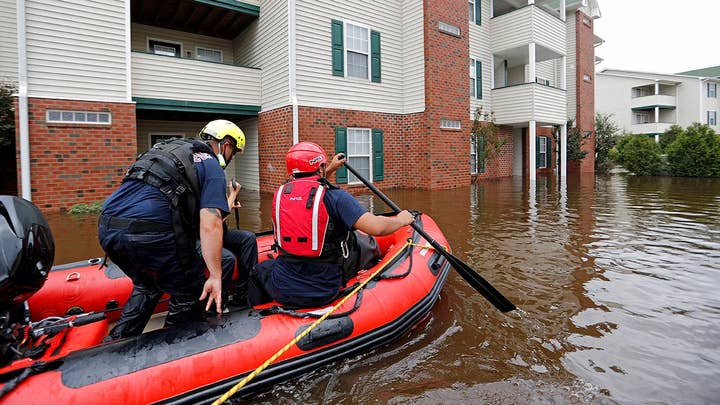 Our smartphone apps, which rely on motorists to report traffic obstacles, were of no use because there were so few people on the roads to report anything.

I clicked “road closure” on my app, so it would stop routing other drivers into the water.

And then we turned around and headed to Wilmington, where we joined a large contingent of Fox News colleagues who were working out of Hotel Ballast downtown.

There was standing water in the street out-front. But inside, hardworking hotel staff members were keeping the property operational with hot meals and warm hospitality.

Cappy, Chip and I began planning an alternate exit route through Myrtle Beach.

Bill Hemmer, who had anchored his show out of Wilmington during the storm, told us he had tried the same route earlier in the day, only to run into floods.

It was getting late, so we decided to reassess our exit strategy after a good night’s sleep. 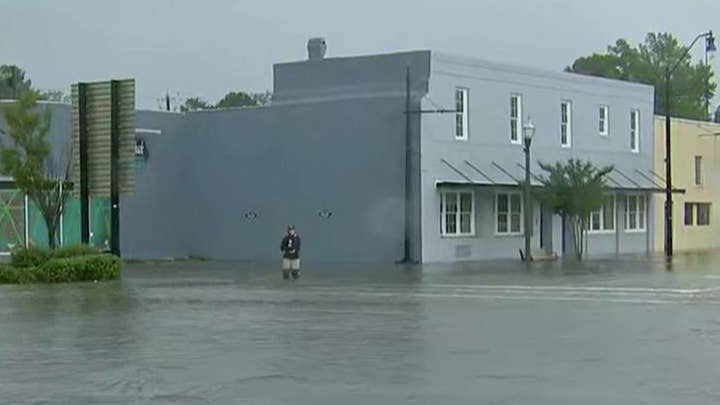 Hotel Ballast was at full occupancy. But Miami-based photographer Chris Pontius, who was working an early shift the next day, was kind enough to lend us his room at the nearby Country Inn & Suites.

It too had remained operational throughout the storm. A man at the front desk explained the housekeeping staff had volunteered to stay at the hotel, so they could continue providing clean linens and towels and breakfast during the hurricane and its aftermath.

“We’re in the hotel business,” he explained. “We’re open 365 days a year. And if people need a comfortable place to stay during the hurricane, we’re going to provide it.”

In my 31 years of covering hurricanes and tropical storms, I’ve been impressed by hotels, restaurants and other businesses that either stay open during disasters or reopen quickly afterwards to serve first responders and the general public during the recovery.

Fox News and several other networks had contracted with an emergency fuel company to park a large tanker truck in downtown Wilmington for us to refuel our vehicles. Chip and Cappy topped off the tanks of our two SUVs, and then filled three external tanks strapped to the top of Cappy’s Suburban, which now looked more like a vehicle from a Mad Max movie.

Monday morning, Fox News producer Lissa Kaplan forwarded me driving directions she had received from a Wilmington City official. It was a somewhat complicated and winding route that state troopers and utility crews were using to get personnel and equipment from Raleigh to Wilmington. But Kaplan suggested if we followed the directions backwards, it would get us as far as Raleigh and from there, we could head to Atlanta. 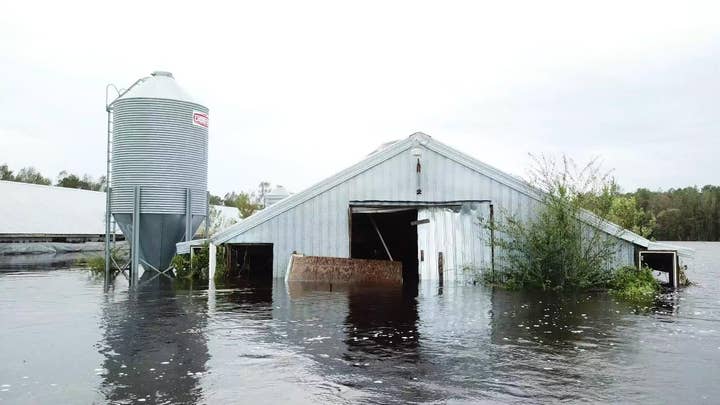 While riding with Cappy and Chip in the Mad Max caravan, I received emails from several colleagues saying, “We’re all rooting for you!”

Other crews eager to return home, or deploy to breaking news in other parts of the state, would base their travel plans on our success or failure. So, as Chip drove, I took detailed notes of the route:

“All obstacles and traffic jams (around gas stations and grocery stores) only affecting right lane. So, keep left.”

We were surprised we ran into no standing water along the route, which weaved through Jacksonville, Beulaville and Goldsboro. However, a construction crew directed one-lane traffic past a crumbling section of Highway 111 that had washed out just outside of Goldsboro.

As we reached the outskirts of Raleigh, things started to return to normal. No long lines outside gas stations. No fallen trees by the side of the road.

We drove into town and enjoyed a late lunch of chicken and waffles. It was our first sit-down restaurant meal since the storm, and something you come to appreciate after an extended power outage.

As I write this article from the passenger seat of Chip’s rental SUV, we’re negotiating our way around a traffic jam on I-85 South.

Thankfully, the issue has nothing to do with flooding, but a construction site that was there long before the storm, and will be long after. Once we get around this, it should be a straight-shot back to Atlanta.

Other colleagues now are emailing me that they, too, have gotten out of Wilmington safely using our route.

But more importantly, I’m grateful for all the utility trucks, police and other service providers we saw driving in the opposite direction along the route. For those impacted by this terrible storm, help is on the way.