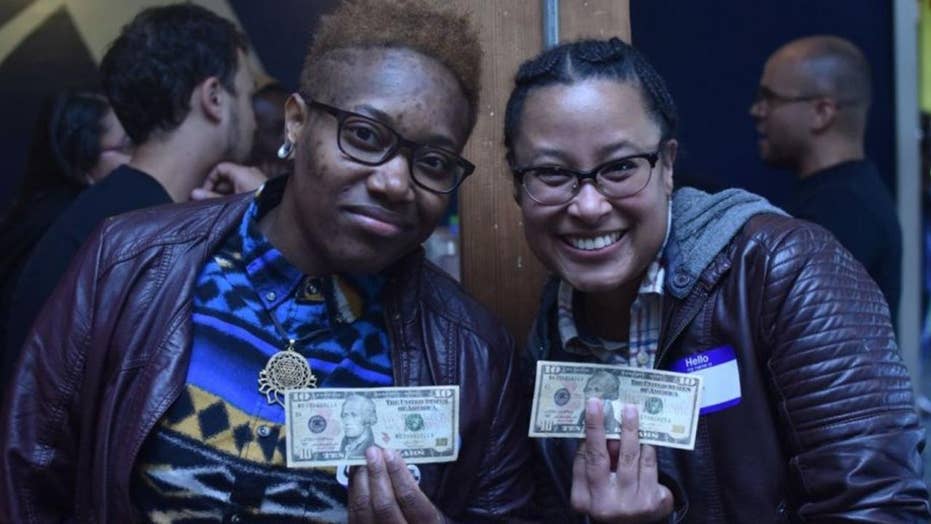 However, the bar in Portland, Ore. that hosted the event earlier this week did not invite white people to attend. A local activist group, Brown Hope, wanted the event to be a safe space for people of color. #Tucker

On Monday night, a bar in Portland, Oregon hosted people of color and gave them $10 as they arrived — a symbolic gift funded primarily by white people who were asked not to attend the “Reparations Happy Hour.”

A local activist group, Brown Hope, wanted the event to be a space for people of color in a mostly white city to meet, organize, discuss public policy and potentially plan various actions.

The notion of full-scale reparations — sought by some as compensation for the horrors of slavery, Jim Crow and the large wealth gap between white and black U.S. households — was supported by 58 percent of black people and 46 percent of Hispanic people in a 2016 poll.

However, 68 percent of white Americans do not support reparations; when the topic was brought up during the 2016 presidential campaign, Vermont Sen. Bernie Sanders said it was “divisive” and unlikely to get through Congress.

The economist Robert Browne once estimated a fair value for reparations of $1.4 trillion to $4.7 trillion and wrote that reparations should ''restore the black community to the economic position it would have had if it had not been subjected to slavery and discrimination.''

U.S. House Speaker Paul Ryan and President Barack Obama stand together at the end of a ceremony commemorating the 150th anniversary of the 13th Amendment, which formally abolished slavery in the aftermath of the U.S. Civil War, at the U.S. Capitol in Washington, December 9, 2015. (Reuters)

Eric J. Miller, a professor at Loyola Law School, said the case for reparations involves a reckoning with the country's history.

“Part of our history is our grandparents participating in these acts of terrible violence [against black people],” he told HuffPost. “But people don’t want to acknowledge the horror of what they engaged in.”

“The cognitive dissonance of learning that your property is got and preserved on the back of the misery of others is not an incredibly nice thing to live with. So people would rather discount it,” Miller said.

Cameron Whitten, the 27-year-old activist who organized the event, said that attendees felt seen and valued by the Portland event — but noted there are much larger goals.

Attendees are seen at the "Reparations Happy Hour" in Portland, Oregon. (Cameron Whitten/Twitter)

“We’re creating a platform to make sure our leadership is being seen and honored,” Whitten told Blavity. “This isn’t just, ‘We’re here to socialize.’ We’re here to do the work. In a place like Portland, where our community is so fractured … our first step is to bring us back together, and then from there organize and mobilize to create policies to create justice in our communities.”

There was enough interest in the idea, which was funded by about 100 people who were mostly white, to hold other happy hours, which will be called "Reparations Power Hour" to accomodate those who don't drink.

Whitten anticipated some of the criticism he's faced, telling the New York Times the event is not meant to diminish the seriousness of reparations.

In 2014, the writer Ta-Nehisi Coates made the case for reparations in the Atlantic. H.R. 40, which was introduced in Congress in January 2017, would study various reparations proposals.