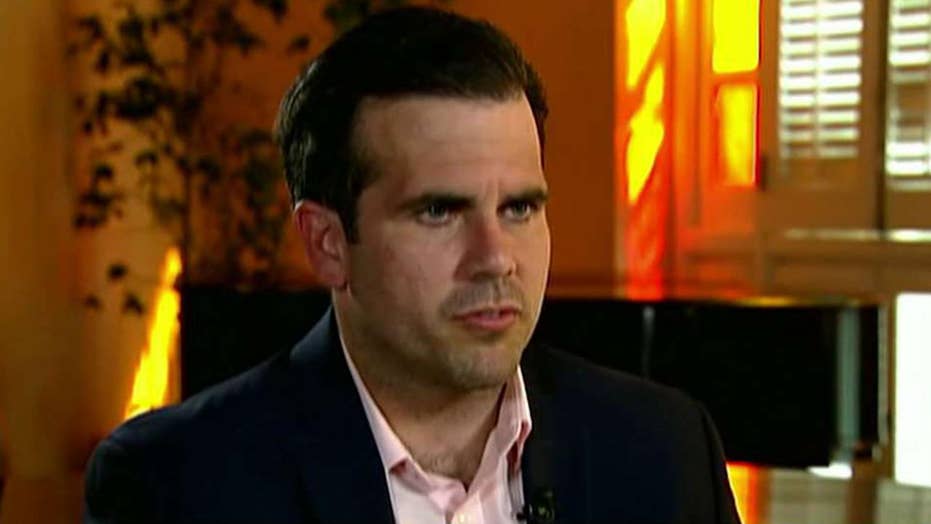 The governor of Puerto Rico said Hurricane Maria disaster funds are taking too long to arrive on the island – and he’s blaming Congress.

“We are being treated as second-class citizens,” Gov. Ricardo Rossello told Fox News. “Why is it the same process in Florida or in Texas takes a week – and in Puerto Rico it takes four months?”

He said hurricane relief efforts in Texas after Hurricane Harvey and Florida after Hurricane Irma were vast and swift, but aid to Puerto Rico has arrived at a snail’s pace.

Others on the island are also growing frustrated by relief efforts that they say are devastatingly slow to reach the island.

On Tuesday nearly two dozen Puerto Rican activists were arrested in the U.S. Capitol demanding Congress provide more financial aid to the commonwealth. Puerto Rico claims it needs $94 billion in aid. Congress has appropriated $23 billion to Puerto Rico but less than $2 billion has been sent.

“I want to see shovels in the ground, and things being built,” said Mike Byrne, federal coordinating officer for the Federal Emergency Management Agency. “I want to see houses being built to code and a power system under construction that will withstand a storm."

Byrne said FEMA’s efforts in Puerto Rico have been unprecedented – with $6 billion spent so far. About $16 million has gone to San Sebastian. The mayor there said the reason for the slow recovery was poor planning before the storm, and bad leadership afterward.

“This town took control of its circumstances,” San Sebastian Mayor Javier Jimenez said, “and we lifted ourselves up.”

Frustrated after not seeing power restored in a month, the town created volunteer brigades that included retired linemen to restore power and clear debris. He said the problem isn’t FEMA funding.

“The governor should have acted with more urgency and he should have taken charge of the utility company,” Jimenez said, “immediately firing those who weren't doing their jobs.”

About 5,000 businesses have closed on the island in the last six months and are not expected to reopen.

On Thursday, U.S. Treasury Secretary Steve Mnuchin met with Governor Rossello to discuss the terms of a new $2 billion loan. Mnuchin has said he wants to ensure the money is serving the best interests of taxpayers, given that Puerto Rico is bankrupt.