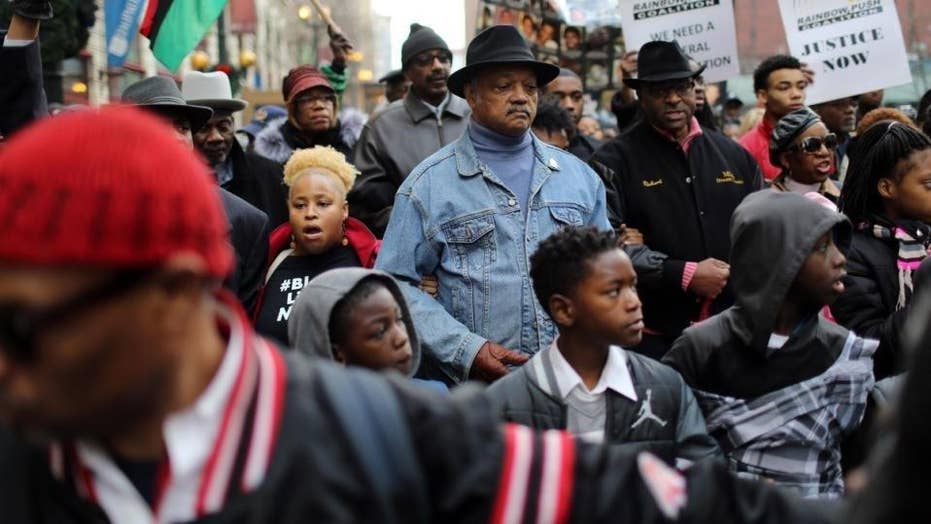 Demonstrators in Chicago marched and disrupted shoppers in the city's world-famous Magnificent Mile Thursday to protest police shootings, one day after activists in Minnesota stormed the Mall of America and the Minneapolis airport.

A crowd of activists gathered on a bridge over the Chicago River and started marching north shortly before noon, as police lined up along Michigan Avenue. Some demonstrators chanted "16 shots and a cover-up," a reference to 17-year-old Laquan McDonald who was shot 16 times.

Organizers in Chicago say they hope the Christmas Eve protest will be a repeat of another demonstration in which a few hundred people disrupted shopping there on Black Friday. Chicago's Magnificent Mile is one of the largest shopping attractions in the Midwest and hosts many high-end stores and hotels.

The release last month of police dashcam video showing the shooting of McDonald has led to weeks of sporadic protests. McDonald was carrying a knife, but appeared to be walking away from officers before the shooting in October 2014.

WMAQ-TV reported Wednesday that at least one officer had requested a Taser beforehand. The news station obtained audio of dispatch calls through a Freedom of Information Act Request.

It remains unclear who requested the Taser or whether an officer with a stun gun arrived on the scene. Officer Jason Van Dyke has been charged with first-degree murder.

Meantime, Minneapolis-St. Paul International Airport police were out in full force to ensure smooth Christmas Eve travel. Airport spokesman Patrick Hogan said eight people were arrested at the airport during the Black Lives Matter-organized protest that began at the nearby Mall of America.

Some protesters suggested they'd set up a bait-and-switch designed to draw attention away from the airport Wednesday.

Hogan said Thursday there's no reason to believe there will be a repeat of the demonstrations that led to traffic backups and security checkpoint shutdowns at a secondary terminal.

He says six people were cited on trespass charges and released while two were taken into custody on gross misdemeanor charges. Bloomington police report four protest-related arrests at the mall.