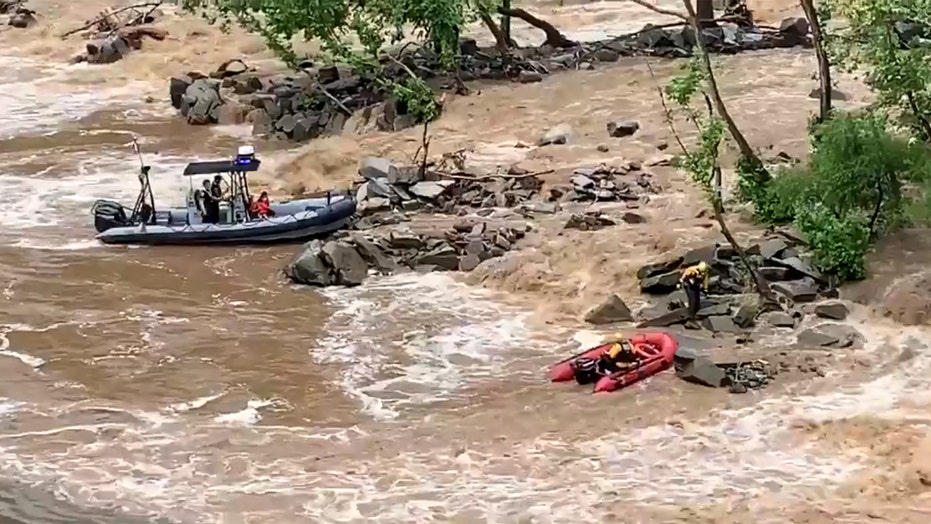 A dozen people had to be rescued from rocks along the Potomac River in the nation's capital on Saturday after recent rains triggered rapidly rising waters.

D.C. Fire and Emergency Medical Services (EMS) said on Twitter that three groups of people had gotten stuck on the rocks by rushing waters at Chain Bridge.

Some of the people at the three different locations were rescued by the Harbor Unit of Washington's Metropolitan Police Department, while firefighters launched inflatable rafts to reach the trapped individuals.

CHINA DROWNING: 8 CHILDREN DROWN IN RIVER TRYING TO SAVE EACH OTHER

Montgomery County Fire and Rescue Service spokesperson Pete Piringer said on Twitter the quickly rising waters south of the Great Falls were described as a "storm surge," leaving the people stranded on the rocks and unable to get back to shore.

A dozen people had to be rescued from the rocks along the Potomac River on Saturday by rapidly rising waters. (DC Fire and EMS)

The National Weather Service (NWS) had issued a flash flood watch for the Washington and Baltimore areas on Saturday until 9 p.m., as forecasters warned that "multiple" rounds of showers and thunderstorms may cause flash flooding on small streams, creeks and in urban areas.

While individuals described the rapidly rising conditions on the river as a 'storm surge," it bears noting that a storm surge is associated with tropical storms and hurricanes as opposed to the flash-flooding on the Potomac over the weekend.

Four children were among the 12 people who were rescued from the rocks along the Potomac River on Saturday by rapidly rising waters. (DC Fire and EMS)

Video released by D.C. Fire and EMS shows rushing water overtaking the rocky areas where the people were being rescued.

Of the 12 rescued on Saturday, officials said that four were children. Nine were brought to Georgetown Harbor for medical evaluation but did not require further medical attention

“I'm guessing just the way the rainfall was it came up on them unexpectedly,” firefighter William Beatty told WJLA-TV.

It's illegal to swim or wade in the Potomac River, with violators at risk of fines of more than $200.

Signs in the area also warn of extremely strong currents and those who go hiking in the area should stay off the rocks at the river's edge.

Piringer said that conditions can change "quickly" and "be dangerous."

D.C. Fire spokesperson Vito Maggiolo told WTOP that those looking to head out along the Potomac should be careful to leave themselves a buffer because it's easy to slip off rocks and to always stay alert since the river can be "deceiving."

“It can look like it’s calm but there are very strong currents," he told WTOP. "If you fall into the river you can get caught up and twirled around and banged up against the rocks, the river may not let you go.”