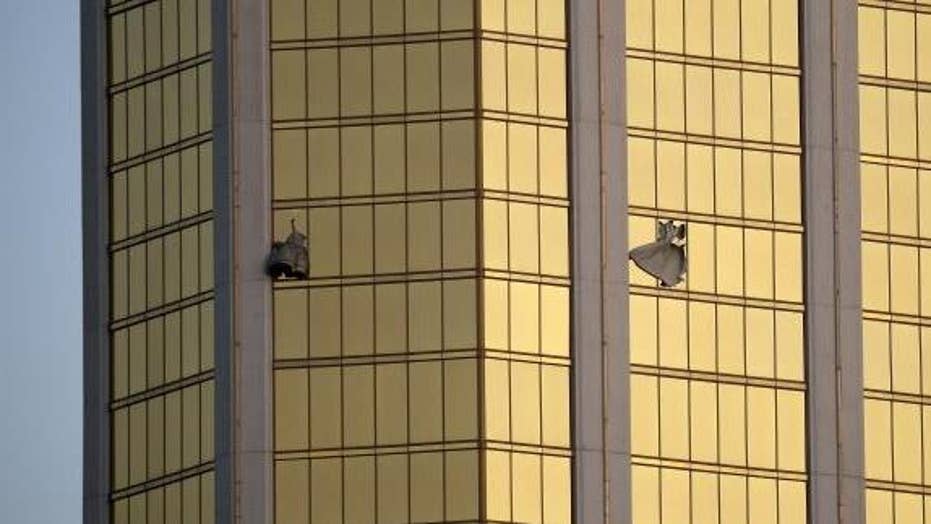 The video released on Wednesday came from officers Sgt. Joshua Bitsko and David Newton, the Las Vegas Journal-Review reported. The first officer to enter the room, Levi Hancock, did not activate his body camera, for reasons that remain unknown to investigators.

The footage appeared to show a group of armed police officers clearing the dimly lit room where Paddock, 64, was staying, the same room where he opened fire a crowd of 22,000 people at an open-air concert on October 1, ultimately killing 58.

A loud unidentifiable bang triggering an alarm inside the hotel, likely set off by police, could be heard in the video. Officers proceeded cautiously whispering directives at one another. One officer was asked to check a butler’s cart, and said, “looks like it might be a camera of some sort.”

Once in the room, one officer said, “Those are cameras pointed down the hallway,” possibly referring to the cameras that Paddock had set up outside his room.

“Check under the bed,” another officer could be heard saying, while another shouted, “Watch these closets, watch your back.”

Police yelled out “clear” as they exited each room within the suite.

The door into the suite could be seen knocked down, hanging on a hinge.

After clearing one of the rooms, one officer seemed to confirm that police already had a suspect’s name and address: “It looks like that name I gave you shares an address with the suspect.”

“We got one suspect down, 419 inside,” the officer wearing the body cam said. “This is clear."

Police body cam footage shows a gun resting on chair. It is unclear if the weapon belonged to Paddock or police. (Las Vegas Metropolitan Police Department)

Body camera footage showed the room in total chaos, with multiple guns apparently thrown about the room. Officials noted that the guns were fitted with scopes.

Police also noted that “several windows” were broken. One officer was seen carrying a gun away from a window where a curtain was pulled back. 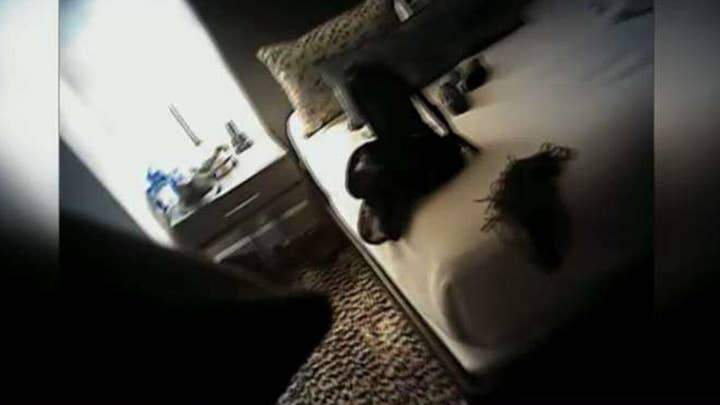 The footage also seemed to clear up questions over initial reports that there were two shooters.

“I’m really thinking this was just a 'one guy' thing,” the officer wearing the body cam could be heard saying. “What about all the calls? Is that just people panicking?” someone else said.

Clark County Sheriff Joe Lombardo said at a news conference on Tuesday the footage “in no way changes the facts” presented immediately after the shooting and in the months-long investigation.

Las Vegas police had been trying to stall the release of the records for months while locked in a court battle with a consortium of news organizations demanding their release. Through a series of appeals, the case eventually snaked its way up to Nevada’s Supreme Court, which on Friday denied a bid to continue delaying the release.

“We’re grateful Las Vegas police have decided to comply with the court’s order,” Glenn Cook, the executive editor of the Las Vegas Review-Journal, one of the organizations involved in the lawsuit, said Tuesday. “All we’ve ever asked Metro to do is follow the letter of the Nevada Public Records Act, which makes clear that taxpayer-funded body camera footage, 911 recordings and other records can be reviewed by the public.”

Lombardo said the ongoing investigation and concerns about the footage traumatizing the victims and their families have gotten in the way of releasing it, even claiming that doing so would cost police and the public “several hundred thousand dollars in manpower, time and equipment.

“At no point was the LVMPD trying to be uncooperative with the media or the public,” he told reporters Tuesday, even though the department was notoriously tight-lipped in the wake of the attack as many have demanded more information.

An attorney for the Review-Journal accused the sheriff of “suggesting that the media is trying to victimize the community” and that he and his department “has done everything in its power” to keep the records from going public.

“The truth is that the community still has many unanswered questions about the police response to 1 October, and it has a right to assess what happened for itself,” said attorney Maggie McLetchie.

An attorney representing some of the victims in the shooting, Michelle Simpson Tuegel, told Fox News her clients “definitely don’t want to re-live things but they want information to be released if nothing else for us to go through.

“The clients have always wanted answers -- to know more about what happened and to have a bigger picture about everything about that night and the days and hours leading up to it,” she said on Wednesday. “It seems like we have gotten piecemeal information.

“It’s interesting because this is still the most severe mass shooting in U.S. history, the numbers of people who were injured and killed were still the highest and most severe... and yet this story has fallen silent,” she added.

The clock is also counting down on the FBI’s promised timeline to release a report on the attack that will focus on the biggest question left unanswered – why gunman Stephen Paddock did what he did.

Special Agent in Charge Aaron Rouse, who is leading the bureau's Las Vegas office, said in December that their report won't be made public until sometime before the shooting's first anniversary, 152 days from Wednesday.

Lombardo, meanwhile, said the release of additional 911 recordings, videos and documents will be provided on a “rolling” basis with the next batch slated to come in around two weeks.

For comparison, police in Florida – following the Valentines Day’s Parkland High School shooting -- released 911 calls less than a month after the attack.

MGM Resorts, which owns the property on which the concert Paddock targeted was staged, also has told Fox News that they are still trying to figure out what to do with the site.

“Regarding a memorial, we believe the victims and those who acted heroically to save lives, should be memorialized and honored, and we look forward to working with those affected, first responders and community leaders, to determine the most appropriate path forward,” said Debra DeShong, a spokesperson.