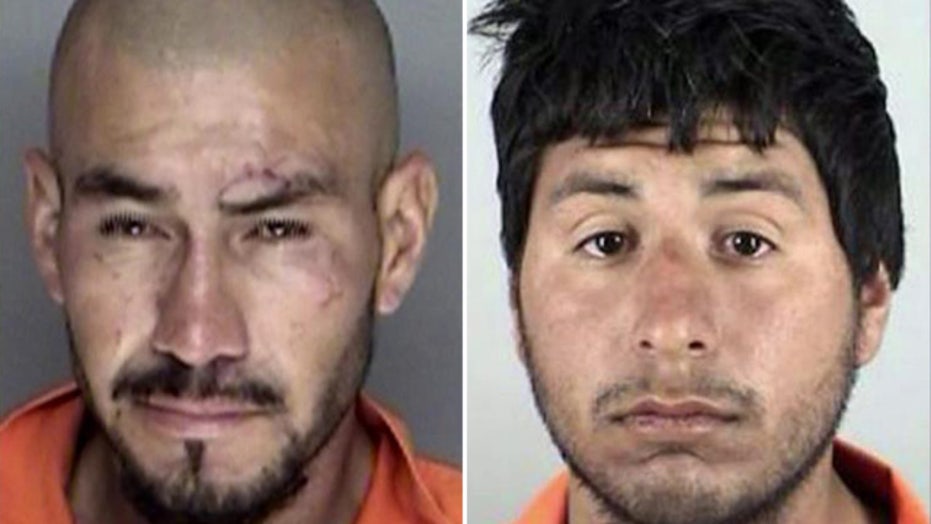 Suspects in murder of Calif. woman set to appear in court

A California toddler fighting for her life Thursday after a brutal beating at the hands of an illegal immigrant with a long criminal record is the latest case to rile California sheriffs and police against a U.S. immigration policy they say is forcing them to release dangerous criminals out on the street.

Francisco Javier Chavez, the live-in boyfriend of the unidentified two-year-old's mother, is out on bail after being charged in the late July attack, which left the San Luis Obispo County girl with two broken arms, a broken femur, a compressed spine, a urinary tract infection and a fever of 107 degrees. Chavez's criminal record includes assault and drug convictions and arrests for violent acts including kidnapping, car jacking and cruelty to a child.

A disgusted San Luis Obispo Sheriff Ian Parkinson told FoxNews.com Chavez should have been locked away or deported long before he had the chance to inflict "horrific injuries" on the little girl, but said conflicting federal policies leave his department handcuffed. Instead, Chavez is now free, awaiting a court date for which he may not even show up.

"The law actually does not give us the right to place an ICE hold, unless there is a warrant for them. That is why we are united in California and asking that this be fixed and changed, because at end of the day, we are the ones who have to let them out the door.”

“The truth is, if we had any legal right to hold him, we would, because of the concern that, not being a U.S. citizen, he will bail out and flee the country and flee prosecution,” said Parkinson, who suspects Chavez may have already fled the county.

The issue, says Parkinson and dozens of other sheriffs and police chiefs across California and Arizona, is that, while Immigration and Customs Enforcement routinely asks departments to hold prisoners like Chavez until they can take custody of them for deportation, the local law enforcement officials believe doing so will expose them to lawsuits. They cite court cases including the March, 2014, U.S. Court of Appeals for the Third Circuit ruling in Galrza v. Szalczyk that held states and localities are not required to imprison people based on ICE "detainer" requests, and that states and localities may be held liable if they participate in wrongful immigration detentions.

“I am not aware of any County in California that is honoring detainers, simply because we can’t,” Parkinson said. “We have to follow the law or the threat of violating the law ourselves,” Parkinson said, citing a Court decision issued approximately one year ago. “The law actually does not give us the right to place an ICE hold, unless there is a warrant for them. That is why we (local law enforcement) are united in California and asking that this be fixed and changed, because at end of the day, we are the ones who have to let them out the door.”

The Arizona Sheriffs’ Association agrees, noting every day ICE asks local sheriffs to ‘detain’ an inmate, yet don’t provide “rational, legal authority to do so,” putting sheriffs at enormous risk for legal liability. When the local authorities let an illegal immigrant criminal free on bail, they do so reluctantly - and they blame ICE.

ICE maintains there is no requirement that it obtain a judicial warrant to compel law enforcement agencies to hold suspects and that a detainer is sufficient. A spokesperson for ICE said the agency continues to work “cooperatively” with local law enforcement partners and is implementing a new plan, the Priority Enforcement Program – PEP, to place the focus on criminals and individuals who threaten the public safety and ensure they are not released from prisons or jails before they can be taken into ICE custody.

Martin Mayer, legal counsel to sheriffs and chiefs of police in 70 law enforcement agencies throughout California for the last 25 years, and general counsel to the California State Sheriffs’ Association, told FoxNews.com the U.S. Department of Justice, the California Office of the Attorney General, and ICE all take the position that the detainer is only a request and the law does not give sheriffs authorization to hold illegal immigrant suspects ordered released by a judge.

If ICE agents are present when suspects are ordered released, and if they have the legal basis to take custody of them, they can, but local law enforcement does not have the authority to hold them in the absence of ICE, the California Sheriffs Association recently said in letter to Congress.

The American Civil Liberties Union's California chapter has been vocal in pressuring city police chiefs to honor the court rulings that said ICE detainers are mere requests, not mandates, and that honoring them would violate suspects' Constitutional rights.

“This (ACLU) letter to the cities states that ‘Your police department should immediately cease complying with immigration detainers, or else risk legal liability for detaining individuals in violation of the Fourth Amendment,’” Mayer said.

The ACLU did not respond to Fox News’ request for comment.

A string of murders across the country by criminal aliens has spotlighted the conflict between ICE and local law enforcement, and in recent days, caught the attention of lawmakers on Capitol Hill. After one of the cases, the July 24 murder of Marilyn Pharis, a 64-year-old Air Force veteran, Santa Maria Police Chief Ralph Martin blamed the state and federal governments for a convoluted policy that leaves local law enforcement holding the bag.

“I am not remiss to say that from Washington D.C. to Sacramento, there is a blood trail to Marilyn Pharis’ bedroom,” Martin said.