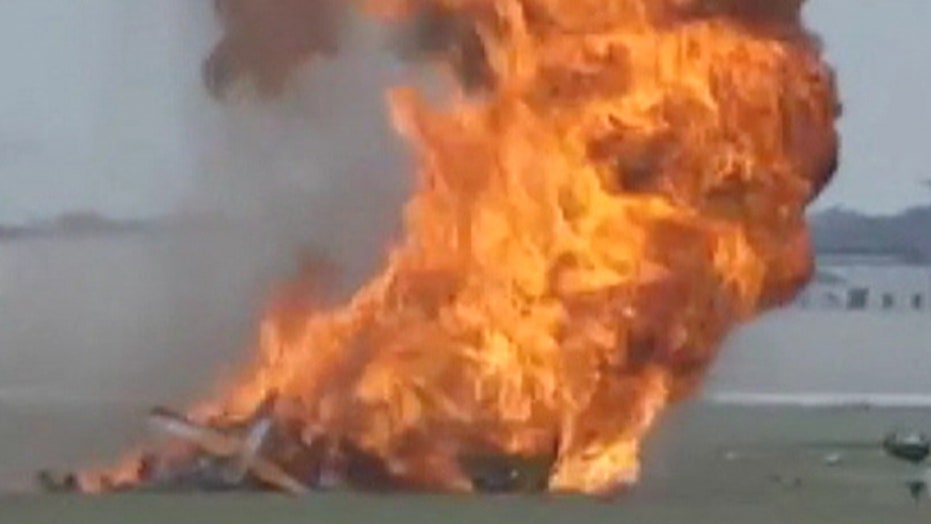 DAYTON, Ohio – A plane carrying a wing walker crashed at an air show and exploded into flames Saturday, killing the pilot and stunt walker, authorities said.

The crash of the 450 HP Stearman happened at around 12:45 p.m. at the Vectren Air Show near Dayton in front of thousands of horrified spectators. No one else was hurt.

A video posted on WHIO-TV shows the plane turn upside-down as the performer sits on top of the wing. The plane then tilts and crashes to the ground, erupting into flames as spectators screamed.

Ian Hoyt, an aviation photographer and licensed pilot from Findlay, was at the show with his girlfriend. He told The Associated Press he was taking photos as the plane passed by and had just raised his camera to take another shot.

"Then I realized they were too low and too slow. And before I knew it, they hit the ground," he said.

He couldn't tell exactly what happened, but it appeared that the plane stalled and didn't have enough air speed, he said. He credited the pilot for steering clear of spectators and potentially saving lives.

"Had he drifted more, I don't know what would have happened," Hoyt said. He said he had been excited to see the show because he'd never seen the scheduled performer -- wing walker Jane Wicker -- in action.

On the video, the announcer narrates as the plane glides through the sky and rolls over while the stuntwoman perches on a wing.

"Now she's still on that far side. Keep an eye on Jane. Keep an eye on Charlie. Watch this! Jane Wicker, sitting on top of the world," the announcer said, right before the plane makes a quick turn and nosedive.

Federal records show that biplane was registered to Wicker, who lived in Loudon, Va. A man who answered the phone at a number listed for Wicker on her website said he had no comment and hung up.

One of the pilots listed on Wicker's website was named Charlie Schwenker. A post on Jane Wicker Airshows' Facebook page announced the deaths of Wicker and Schwenker and asked for prayers for their families.

A message left at a phone listing for Charles Schwenker in Oakton, Va., wasn't immediately returned.

Dayton International Airport spokeswoman Linda Hughes and Ohio State Highway Patrol Lt. Anne Ralston confirmed that a pilot and stunt walker had died but declined to give their names. The air show also declined to release their identities.

The show was canceled for the rest of the day, but organizers said events would resume Sunday and follow the previous schedule and normal operations. The National Transportation Safety Board said it is investigating the crash.

Another spectator, Shawn Warwick of New Knoxville, told the Dayton Daily News that he was watching the flight through binoculars.

"I noticed it was upside-down really close to the ground. She was sitting on the bottom of the plane," he said. "I saw it just go right into the ground and explode."

Thanh Tran, of Fairfield, said he could see a look of concern on the wing walker's face just before the plane went down.

"She looked very scared," he said. "Then the airplane crashed on the ground. After that, it was terrible, man ... very terrible."

Wicker's website says she responded to a classified ad from the Flying Circus Airshow in Bealeton, Va., in 1990, for a wing-walking position, thinking it would be fun. She was a contract employee who worked as a Federal Aviation Administration budget analyst, the FAA said.

She told WDTN-TV in an interview this week that her signature move was hanging underneath the plane's wing by her feet and sitting on the bottom of the airplane while it's upside-down.

"I'm never nervous or scared because I know if I do everything as I usually do, everything's going to be just fine," she told the station.

Wicker wrote on her website that she had never had any close calls.

"What you see us do out there is after an enormous amount of practice and fine tuning, not to mention the airplane goes through microscopic care. It is a managed risk and that is what keeps us alive," she wrote.

In 2011, wing walker Todd Green fell 200 feet to his death at an air show in Michigan while performing a stunt in which he grabbed the skid of a helicopter.

In 2007, veteran stunt pilot Jim LeRoy was killed at the Dayton show when his biplane slammed into the runway while performing loop-to-loops and caught fire.

Organizers were presenting a trimmed-down show and expected smaller crowds at Dayton after the Air Force Thunderbirds and other military participants pulled out this year because of federal budget cuts.

The air show, one of the country's oldest, usually draws around 70,000 people and has a $3.2 million impact on the local economy. Without military aircraft and support, the show expected attendance to be off 30 percent or more.