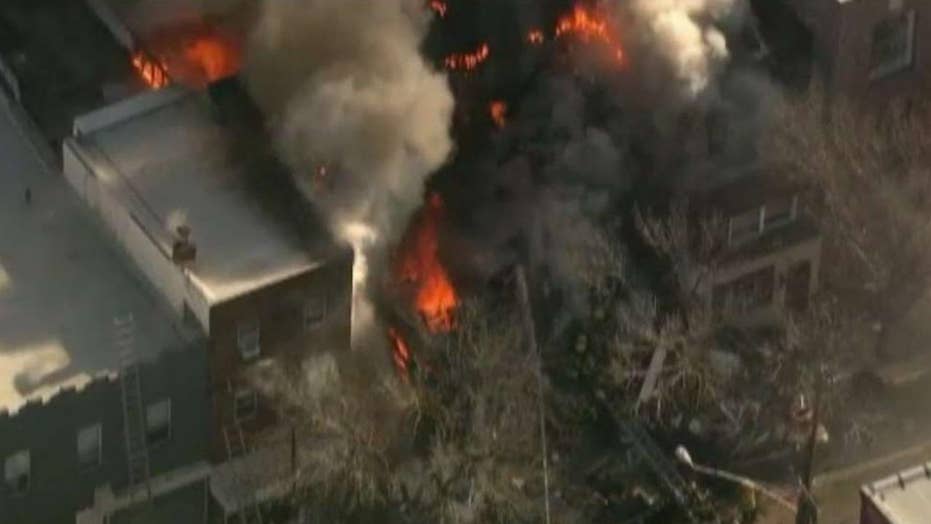 Two are presumed dead in the 3-alarm fire caused by the explosion.

Fire crews say they have recovered two bodies of people who were believed to be victims of a "violent" gas explosion and subsequent 3-alarm fire that rocked a number of homes in South Philadelphia on Thursday.

Emergency responders recovered the body of the first victim Friday before saying they would need to demolish a nearby home to reach the second victim, whose remains were found Saturday. Authorities didn't immediately release the identities of the victims.

Officials said Friday that an "undermined" street had prevented them from digging out the bodies. Philadelphia Fire Commissioner Adam Thiel added they had made two attempts to rescue someone they saw trapped, but the fire was too intense and collapsing buildings pushed the victim away from them, according to Philadelphia's FOX 29.

Philadelphia's Red Paw Relief Team said that one dog and one cat remained unaccounted for as of Friday.

The explosion leveled three houses and significantly damaged two others around 11:36 a.m. at South 8th and South Franklin streets. Sixty people on the block were evacuated as nearly 120 firefighters battled the raging fires for hours.

"We believe now that we have pretty good confidence that there are two people who are missing and presumably deceased," Thiel said Thursday.

Rescuers on Thursday were still putting out "pockets of fire" in the burning homes, which were under control just before 3 p.m., FOX 29 reported. Theil said the charred buildings were too structurally unstable "to put anyone else in there" as day turned to night.

After the fire, Thiel didn't rule out the possibility that additional people may have been trapped in the rubble after walking by on the street when the explosion occurred.

"Don't know what's in the debris field," he said at a news conference Thursday night. “We’re not giving up. We don’t ever give up.”

Theil added that the "herculean" rescue efforts would start up again at first light Friday to remove the debris in the area and search for additional people who may be trapped underneath.

The explosion, described as "a firestorm," sent plumes of smoke that could be seen for miles, as wind gusts reached 20 miles an hour.

"It sounded like a bomb exploded," one witness told Philadelphia's WPVI-TV.

A reception center at South Philadelphia High School was available for anyone affected by the fire. The Red Cross had been on the scene to provide aid as needed.