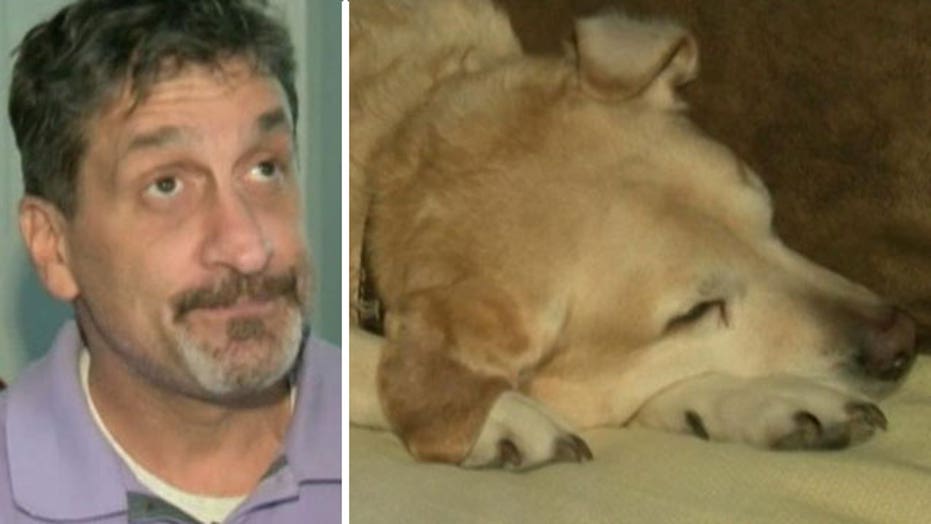 Passengers protest as blind man is booted off plane

A US Airways Express flight from Philadelphia to Long Island was canceled Wednesday night after passengers rallied behind a blind man who was removed from the flight after his service dog became restless.

Albert Rizzi said the argument began when a crew member told him to put his service dog under the seat in front of him as they waited for the US Airways Express flight to leave Philadelphia International Airport for the airport in Ronkonkoma, N.Y.

Rizzi, who is legally blind, told MyFoxTwinCities.com that the flight attendant became aggressive after noticing his service dog, Doxy, laying in the aisle. He said the dog became restless after 45 minutes on the tarmac.

"The flight attendant comes over and says, 'I need you to get that dog stowed again,'" Rizzi told the station. "She comes back and gets in my face again. 'I told you that dog needs to be under a seat or we are not taking off.'"

Flight attendants described the dog as agitated and expressed concern that Rizzi was not controlling it, airline spokeswoman Liz Landau told The Associated Press.

Rizzi became verbally abusive, and the crew decided to remove him, Landau said. That decision caused some of the other 33 travelers to become upset, she said, and the flight was canceled. US Airways then arranged for a bus to drive passengers to Long Island.

"My comfort level with my blindness was totally rocked," Rizzi said. "I felt like a useless, unappreciated loser."

One passenger told MyFoxTwinCities.com that he was so concerned about Rizzi that even before the protest took place, he was ready to offer to get off the plane, rent a car and drive Rizzi and Doxy to New York.

"We were like, 'Why is this happening? He's not a problem. What is going on?'" said Ohlhorst.

Landau told the AP that crews are very familiar with the protocol for service animals, but that the airline is reviewing how the situation was handled.

Rizzi said he later learned there had been open seats on the plane. "She never tried to move me or anybody else to secure the aircraft the way she said needed to be secured," Rizzi said of the flight attendant.

He told MyFoxTwinCities.com that he was grateful other passengers supported him.

"When I heard those people coming off the plane saying what they said, I felt like a million dollars and more humble than I have ever felt in my entire life," Rizzi said.