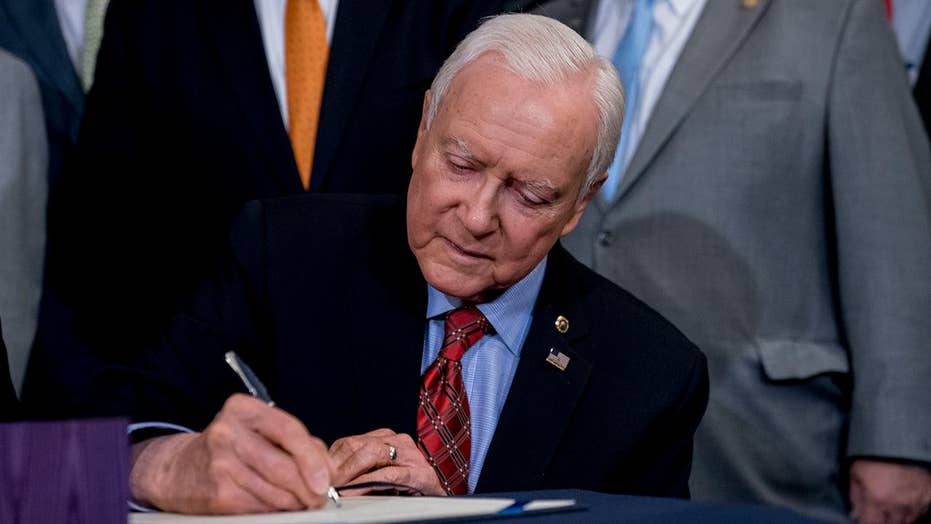 Sen. Orrin Hatch announces he will not seek re-election

Republican will retire at the end of his term; Bret Baier breaks down the political fallout in Utah and beyond.

Politicians spoke out on social media Tuesday after it was revealed that Sen. Orrin Hatch, R-Utah, is not planning to run for reelection.

A video announcement about the decision was posted on Twitter.

“I’ve always been a fighter,” Hatch, 83, said in the clip. “I was an amateur boxer in my youth and I’ve brought that fighting spirit with me to Washington. But a good fighter knows when to hang up the gloves, and for me, that time is soon approaching.”

Hatch, the chairman of the Senate Finance Committee, said he’s chosen to “retire at the end of this term.”

Read on for some reactions from other politicians.

"Congratulations to Senator Orrin Hatch on an absolutely incredible career," President Trump tweeted. "He has been a tremendous supporter, and I will never forget the (beyond kind) statements he has made about me as President. He is my friend and he will be greatly missed in the U.S. Senate!"

Vice President Mike Pence spoke out about Hatch on Tuesday, thanking him for "for your decades of service in the United States Senate and for fighting every day for the American people. @POTUS & I will always be grateful for your leadership, counsel, and friendship."

"I count myself so fortunate to work with @senorrinhatch," House Speaker Paul Ryan, R-Wis., tweeted. "His hopeful spirit and sense of purpose always stand out. Tax reform bears the stamp of his resolve, another generational achievement in a storied career. What a run. Thank you, Mr. Chairman."

"@senorrinhatch's long list of accomplishments means he will depart as one of the most productive members ever to serve in the #Senate," Senate Majority Leader Mitch McConnell, R-Ky., tweeted. "We’ll remember the unfailing energy, kindness, and straightforward honesty that he brought to work every day."

“Few have been as dedicated to serving the people of Utah as our good Senator, Orrin Hatch,” Gov. Gary Herbert, R-Utah, tweeted. “For seven terms, he has represented the people of Utah with strength and dignity. We are grateful for his hard work and for his untiring effort on behalf of our state. I wish him the best.”

“Sen. Hatch has been a tremendous servant to the people of Utah and he will be sorely missed. It has truly been an honor serving with him in the United States Senate and I know he will continue to do fantastic work for Utahns.”

Romney, the Republican presidential nominee during the 2012 election, tweeted, “I join the people of Utah in thanking my friend, Senator Orrin Hatch for his more than forty years of service to our great state and nation.”

“It has been and continues to be a privilege to serve with such a fighter and a gentleman,” Sen. Shelley Moore Capito, R-W.V., tweeted. “You will be missed in the Senate, @OrrinHatch!”

“.@senorrinhatch has given Utahns and Americans four decades of dedicated leadership and public service,” Sen. Johnny Isakson, R-Ga., tweeted. “His legacy will be lasting in everything from health care, to the judiciary, to tax reform and beyond.”

“For more than 40 years @OrrinHatch has faithfully and effectively represented Utah and promoted conservative principles in the U.S. Senate,” Sen. Jeff Flake, R-Ariz., tweeted. “Thankful for his service and proud to call him a colleague and a friend.”

Grassley, R-Iowa, wrote that Hatch “is a friend for 37 yrs while serving together in US Senate. He serves Utah & USA w tremendous success as effective as can be & deserves credit 4 doing so.”

“It's been an honor to work with you, especially on the SUCCEED Act,” Sen. Thom Tillis, R-N.C., tweeted. “Thank you for your service to our nation!”

“It has been an honor to work with you on Finance Committee Chairman Hatch,” Sen. Tim Scott, R-S.C., tweeted. “Thank you for your service to Utah and our nation!”

“Congratulations on an outstanding tenure in the Senate, @senorrinhatch,” Sen. Bob Corker, R-Tenn., tweeted. “The state of Utah and our country are better off because of your distinguished service, and I look forward to continuing to work with you over the next year.”

“Fortunate to have worked with my friend @senorrinhatch over the last three years,” Sen. Joni Ernst, R-Iowa, tweeted. “Thank you for your years of dedicated service and wishing you, Elaine, and your family the very best.”

"Senator Hatch epitomizes what it means to be a public servant, a true servant leader in every respect," Sen. Rob Portman, R-Ohio, said as part of a statement. "Over the years, he has been a model for me of a serious legislator who reaches across the aisle and focuses on delivering results that will help the people we represent.  Perhaps most importantly, he is a gentleman who treats everyone with respect, regardless of party.  I look forward to working with him for the next year, and Jane and I wish him, Elaine, and his family the best in the future.”

"Senator Orrin Hatch has served with great distinction in the United States Senate," Rep. Mia Love, R-Utah, said in a statement. "If any public official deserves to leave office with the heartfelt gratitude of both a state and a nation, it is Senator Hatch. Personally, I will miss his leadership, his guidance and the wonderful friendship he has given me.  No Senator has accomplished more during his time in office than Senator Hatch, and our state and nation are better for it.  I want to wish both he and Elaine the very best in their next great adventure.”