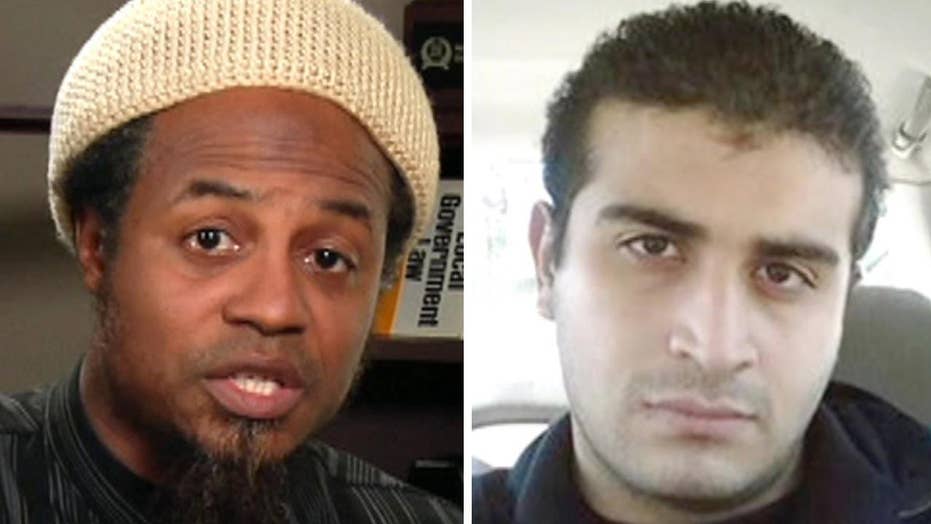 Omar Mateen, it was reported, was a follower of Marcus Robertson, AKA Imam Abu Taubah, who was freed from prison last year. The Imam tells 'On the Record' he has never known Mateen, that he was never enrolled in his online school

The gunman who murdered at least 50 people in a Florida nightclub early Sunday morning was a follower of a controversial gang leader-turned-bank robber who was released from prison last year despite warnings from prosecutors that he would recruit people to carry out violent acts, sources told FoxNews.com.

Omar Mateen, whose bloody siege inside a packed Orlando gay nightclub ended when SWAT teams stormed the building and killed him, was a radical Muslim who followed Marcus Dwayne Robertson, a law enforcement source said.

“It is no coincidence that this happened in Orlando,” said a law enforcement source familiar with Robertson’s history of recruiting terrorists and inciting violence. “Mateen was enrolled in [Robertson’s online] Fundamental Islamic Knowledge Seminary.”

Robertson and several associates were rounded up for questioning early Sunday, according to law enforcement sources, a development his attorney refused to confirm or deny.

This undated image provided by the Orlando Police Department shows Omar Mateen, the shooting suspect at the Pulse nightclub in Orlando, Fla., Sunday, June 12, 2016. The gunman opened fire inside the crowded gay nightclub early Sunday before dying in a gunfight with SWAT officers, police said. (Orlando Police Department via AP) (The Associated Press)

“No comment,” Corey Cohen said in an email reply when asked if his longtime client was in custody. Police also did not confirm or deny picking up Robertson.

Robertson's school may not have been the only source of Mateen's spiritual guidance. The gunman was at the Islamic Center of Fort Pierce with Imam Shafiq Rahman two days before the nightclub attack, according to The Washington Post. That mosque was frequented by American-born suicide bomber Monar abu Salha, who blew himself up in Syria in 2014, and the two knew each other, according to officials. Mateen's association with Salha led the FBI to interview him in 2014. Rep. Michael McCaul, chairman of the House Homeland Security Committee Mike McCaul told Fox News law enforcement determined at the time their contact “was minimal.”

FoxNews.com has reported extensively on Robertson, a former U.S. Marine who served as a bodyguard to the Blind Sheik involved in the 1993 World Trade Center Attack and led a gang of New York bank robbers called “Ali Baba and the 40 Thieves” before resurfacing in Orlando, where he started an Islamic seminary.

The school, recently renamed the Timbuktu Seminary, is operated by Robertson, a 47-year-old firebrand known to his thousands of followers as Abu Taubah.

Robertson, who recently spent four years in prison in Florida on illegal weapons and tax fraud charges before being released by a Florida judge one year ago, has openly and enthusiastically preached against homosexuality. The targets of Mateen’s bloody rampage were members of the gay community of Orlando, 120 miles from the 29-year-old’s home in Fort Pierce.

Prosecutors said wiretaps from 2011 proved Robertson instructed one of his students, Jonathan Paul Jimenez, to file false tax returns to obtain a tax refund to pay for travel to Mauritania for terror training.

Jimenez studied with Robertson for a year in preparation for his travel to Mauritania, where he would study and further his training in killing, suicide bombing, and identifying and murdering U.S. military personnel. He pleaded guilty in 2012 to lying to authorities and conspiring to defraud the IRS and was sentenced to 10 years in federal prison.

Robertson was arrested on a firearms charge in 2011 and pleaded guilty in January 2012. On March 14, 2012, federal authorities charged him with conspiring to defraud the IRS, which he was convicted of in December 2013.

While in the John E. Polk Correctional Facility in Seminole County, Robertson was considered so dangerous, he was kept in shackles and assigned his own guards. Whenever he was transported to court, a seven-car caravan of armed federal marshals escorted him. He was initially moved into solitary confinement after prison authorities believed he was radicalizing up to 36 of his fellow prisoners.

In seeking enhanced terrorism charges during sentencing for the two crimes, prosecutors said Robertson has been involved with terrorism activities, “…focused on training others to commit violent acts as opposed to committing them himself” … “overseas instead of inside the United States.”

Yet efforts by federal prosecutors to tack on another 10 years to his sentence, based on enhanced terrorism charges under the Foreign Intelligence Surveillance Act, were not persuasive enough for U.S. District Judge Gregory Presnell, who freed Robertson in June 2015 with time served.

Robertson had denied being involved with terrorist activities, in court and in postings on social media and in statements from his attorney to Fox News.

Federal law enforcement has been familiar with Robertson since 1991.

As a former U.S. Marine who became the leader known as "Ali Baba” of a notorious New York gang “Ali Baba and the 40 Thieves”, Robertson and his crew robbed more than 10 banks, private homes and post offices at gunpoint, shot three police officers, and attacked one cop after he was injured by a homemade pipe bomb.

During the same period, federal authorities claimed Robertson served as a bodyguard to Omar Abdel Rahman, nicknamed the “Blind Sheik,” who led the terrorist group that carried out the 1993 bombing of the World Trade Center and donated more than $300,000 in stolen funds to mosques he attended, both claims Robertson denied. Robertson has adamantly denied the claims.

After he was arrested in 1991 along with most of the other members of the gang, prosecutors cut a deal with Robertson, and let him serve four years in prison before going to work undercover for the FBI between 2004 and 2007 to document terrorists’ plans and networks in Africa, Egypt and the United States.

Many of the court’s filings, including Robertson’s own testimony from his most recent criminal case, remain under federal seal, which means only prosecutors, the judge and the defense can review the records.

Cohen told FoxNews.com in a statement that his client “never taught or condoned violence in any way.”

“In fact for his federal case the judge did not find terrorist acts, which led to his sentence of time served,” Cohen said.