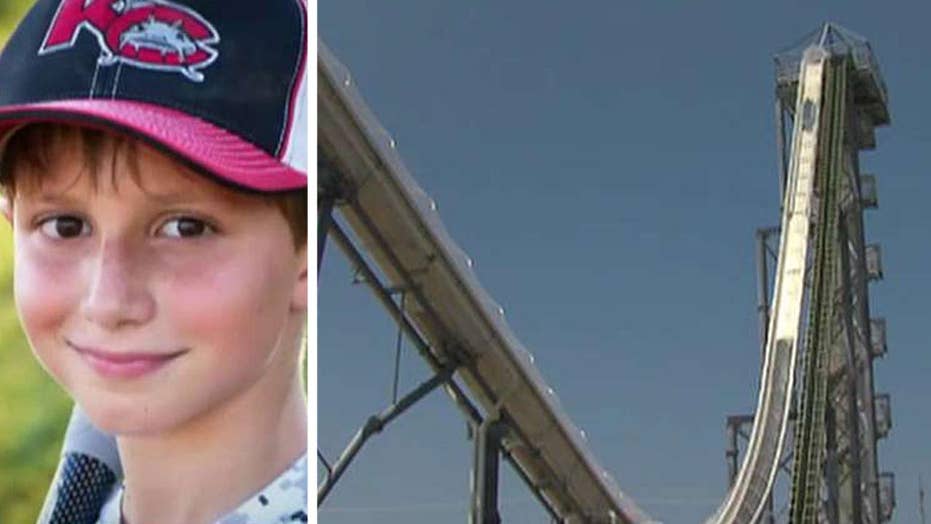 10-year-old boy dead after accident at the Schlitterbahn Waterpark in Kansas City, Kansas

Investigators were treating the death of a 10-year-old boy on the world's tallest waterslide as a "civil matter" rather than a criminal incident, a police spokesman said Monday, as the park and Kansas authorities pressed to sort out what caused the tragedy.

Few details have been released about the death Sunday of Caleb Thomas Schwab, the son of a Kansas state legislator. The 168-foot-tall Verruckt is one of the top attractions of Schlitterbahn Waterpark in Kansas City, Kansas. The park was closed Monday amid the investigation.

The Wyandotte County coroner's office began a post-mortem examination on Monday. Margaret Studyvin, an administrative assistant with the department, said it wasn't clear when or if autopsy results would be made public.

Kansas City police spokesman Officer Cameron Morgan said no police report was available of the incident and deferred additional questions to the park.

In an email Monday, Winter Prosapio, spokeswoman for Schlitterbahn, said the park would not be "participating in any further media interviews at this time." A day earlier, she told reporters that Caleb had been at the park with family members, adding "We honestly don't know what's happened."

Riders go down the slide in multi-person rafts. Each rider must be at least 54 inches tall and the weight of the group is limited to a total of 400 to 550 pounds. Because of heavy demand, rides are scheduled by reservation at the time the park opens each day.

The park's website touts the ride as the "ultimate in water slide thrills," subjecting "adventure seekers" with a "jaw dropping" 17-story drop, "only to be blasted back up a second massive hill and then sent down yet another gut wrenching 50 foot drop."

Verruckt, which means "insane" in German, was certified as the world's tallest waterslide by Guinness World Records.

State Rep. Scott Schwab, an Olathe Republican, and his wife, Michele, released a statement asking for privacy as the family grieves.

"Since the day he was born, he brought abundant joy to our family and all those he came in contact with," the statement said.

Authorities initially said the victim was 12 years old, but Clint Sprague, a pastor acting as the family's spokesman, said Caleb was 10 and is one of the couple's four sons.

House Speaker Ray Merrick told the Kansas City Star that Schwab's family was "the center of his world."

Verruckt's 2014 opening was repeatedly delayed, though the operators didn't explain why. Two media sneak preview days in 2014 were canceled because of problems with a conveyor system that hauls 100-pound rafts to the top of the slide.

In a news article linked to the news release announcing a 2014 delay, Schlitterbahn co-owner Jeff Henry told USA Today that he and senior designer John Schooley had based their calculations when designing the slide on roller coasters, but that didn't translate well to a waterslide like Verruckt.

In early tests, rafts carrying sandbags flew off the slide, prompting engineers to tear down half of the ride and reconfigure some angles at a cost of $1 million, Henry said.

A promotional video for a show about building the slide includes footage of two men riding a raft down a half-size test model and going slightly airborne as it crests the top of the first big hill.

Prosapio said Sunday that the park's rides are inspected daily and by an "outside party" before the start of each season.

Without specifically mentioning water slides, Kansas statutes describe an "amusement ride" as "any mechanical or electrical device that carries or conveys passengers along, around or over a fixed or restricted route or course or within a defined area for the purpose of giving its passengers amusement, pleasure, thrills or excitement."

Such rides, according to the statute, commonly are known as Ferris wheels, carousels, parachute towers, bungee jumps and roller coasters.

State law leaves it to the Kansas Department of Labor to adopt rules and regulations relating to certification and inspection of rides, adding that an amusement ride at a permanent location "shall be self-inspected by a qualified inspector at least every 12 months."

Kansas state Sen. Greg Smith, an Overland Park Republican, said that although state law doesn't specifically address waterslides, it's clear they "would fall into that category."

He called any potential legislative action spurred by Sunday's tragedy premature, saying the investigation of Caleb Schwab's death should be given time to unfold.

"Until we have those facts it's too early to specify what we can do legislatively," Smith said.