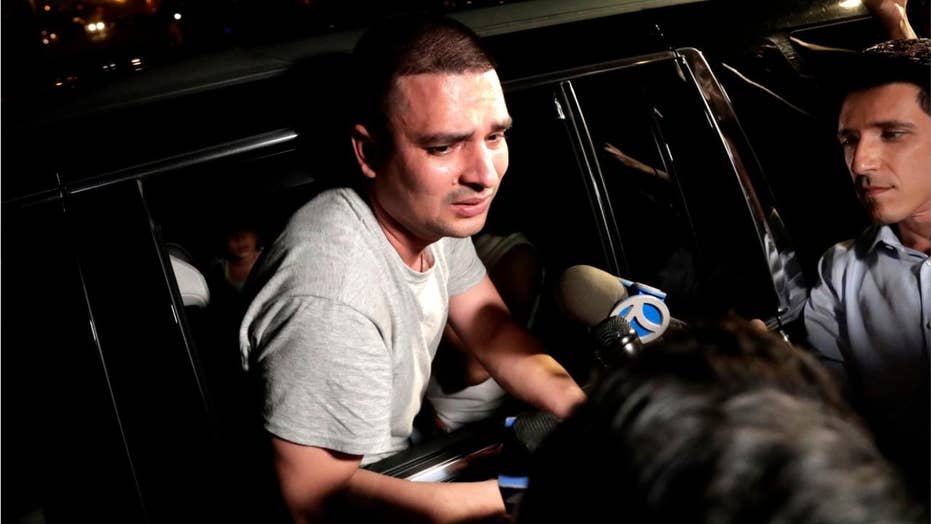 Pablo Villavicencio is back in court after his attention-grabbing arrest this summer when ICE detained him while delivering pizza. He faces new allegations that he was violent toward his wife.

The pizza deliveryman who sparked an immigration debate after being taken into custody by authorities at a New York City military base was ordered Tuesday to stay away from his wife amid allegations he recently pushed her against a wall and “slapped her body.”

Pablo Villavicencio, an Ecuadorian who the government says illegally entered the U.S. in 2008 and then ignored a deportation order issued to him two years later, appeared in court Tuesday in Hempstead following his arrest Friday on Long Island in New York, according to Newsday.

The 35-year-old married father of two was freed on bail following the appearance, in which a judge made the order and set a trial date for November, the newspaper added. Villavicencio had pleaded guilty over the weekend to a criminal mischief charge and formerly was held on bail of $500 bond or $250 cash.

Villavicencio made headlines over the summer when he attempted to deliver a pizza to a military base in Fort Hamilton in Brooklyn -- only to end up in the custody of Immigration and Customs Enforcement officials after they conducted a background check and learned of his status.

He was freed in July and the government has not appealed that ruling. Villavicencio in February started the process to gain residency status in the U.S.

A criminal complaint viewed by Newsday said Villavicencio pushed his wife, an American citizen, against a wall Thursday and then “slapped her body.”

When the wife said she was going to call police, he allegedly took the phone away from her. Officers found the phone in the pocket of Villavicencio’s shorts the next day after the wife went to Hempstead police to file a complaint, according to the newspaper.

It added that Villavicencio has been charged for preventing her from making a call to police, not for allegedly hitting her.

His wife, Sandra Chica, said the alleged incident happened after Villavicencio asked her to hand over the passports for their children, but did not explain why he wanted them.

"This made Pablo very angry," she said in a signed statement to police. "He has been increasingly angry since I told him I wanted a divorce."

The Legal Aid Society of New York City, which had represented Villavicencio in his immigration battle, said it hopes the case is taken care of soon.

“The past several months, including Pablo’s detention and threats of imminent deportation, have been traumatic for the Villavicencio family,” it said in a statement. “We are hopeful that this matter will be resolved and that Pablo will secure valid status with the continued assistance of our counsel.”