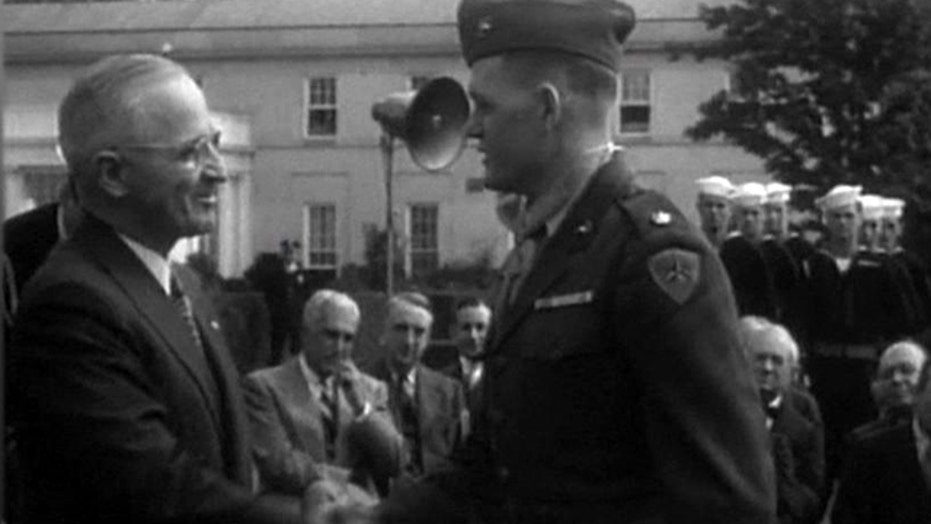 With an act of almost unbelievable courage, Arthur J. Jackson took out 12 bunkers and killed almost 50 soldiers in a single savage battle for the South Pacific island of Peleliu in 1945, earning him the Medal of Honor from President Harry Truman.

But it stayed in his hands for only a couple weeks. Jackson was in New York to be saluted at a gala event along with several other World Word II Medal of Honor winners and left it on his bed when he went out for the evening. It was the last time he saw it.

For 42 years, the medal’s whereabouts remained a mystery. Then, in 1987, it appeared there was a break in the case.

Jackson got a call from Harold “Speedy” Wilson, a fellow Medal of Honor recipient. Wilson had been told by a VA administrator in Chester, S.C., that Jackson’s medal was on display at a local TV repair shop.

The shop owner, Joel Shockley, told Fox News he bought the medal for $300 at a gun show in Charlotte, N.C.  It came with a photocopy of Jackson’s citation, so he assumed it was Jackson’s medal.

Shockley agreed that the medal should go back to its rightful owner. So he boxed it and mailed it to Jackson.

But when Jackson opened the package, and turned over the medal he was stunned. On the back, there should have been an inscription with his name, Truman’s and the place and date of action.  But the metal was flat and blank.

The medal was a fake.

For the second time, it had slipped from the grasp of Jackson, now 88, who is a resident of Boise, Idaho.

The FBI got involved, and assumed that Shockley had kept the real medal, while sending Jackson a facsimile. There were plenty of those floating around. In fact, the company that was hired to produce the Medal of Honor was fined and lost its government contract for stamping out bogus medals in addition to the real ones.  They became popular items for military collectors.

Twenty-five years have since passed, but the investigation has yielded no clues as to where Jackson’s medal might be.

Fox News learned of the story a few weeks ago and spoke several times with Shockley about the medal he returned and whether it was possible he never relinquished the real one.

There were two main reasons the FBI believed there were multiple medals. One was that Wilson had seen the inscription on the back. But according to Shockley, Wilson never came into his shop -- only the VA Administrator did.

The other reason is an article in the Chester News and Reporter from March 30, 1987.  It detailed Jackson’s story and Shockley’s offer to send the medal back. In a photograph of Shockley holding the medal, the ribbon is different from the one that held Jackson’s medal. The FBI figured: two ribbons, two medals.

But when Jackson’s family sent the fake medal to Fox News for examination, it came with two ribbons. A ribbon identical to the one in the photo, and a ribbon similar to the original.

When Fox News shared this new information with investigators, they began to reconsider.

It is now possible, sources close to the investigation tell Fox News, that Shockley never had the real medal. That he was essentially duped at the Charlotte gun show into buying a fake.

Fox News asked Shockley if he knew of any collector who might have the original medal.

“No – I wish I did,” he said.  “That way I could get this mess straightened out once and for all.  I tell you – it has caused a lot of heartache and headaches.”

The question remains: If Shockley never had Jackson’s medal, where is it?  The FBI’s only interest now is in returning it to its rightful owner.

The Medal of Honor is a highly prized collectible among fans of military memorabilia. But Jackson’s family says it belongs to the hero who earned it through extraordinary valor.

In fact, Jackson’s Medal of Honor citation is nothing short of incredible. During the savage battle for Peleliu in the South Pacific, his 7th Marines were pinned by withering Japanese fire from dug-in fortifications. That’s when the 19-year-old Jackson drew on an almost superhuman courage and determination.

“When my platoon leader came along,” Jackson told Fox News, “he asked me…Jackson – do you think you can get into that ---damned shallow trench that runs across the front of that big bunker?  If you can, you could probably do some bad things.”

Dodging a hail of enemy fire and snipers in the surrounding coconut trees, Jackson made for the trench.  He and a squad member had rigged a pack with 45 pounds of C2 plastic explosive.  Jackson threw a phosphorous grenade into the bunker, then pushed the pack through the aperture and lit the fuse.

“And it just sizzled. And I knew I had about 30 seconds to get the hell out of the area,” he told Fox News.

Jackson spotted a nearby crater from a 500-pound bomb and ran to it like it was the last thing he’d ever do. It almost was.

“Just as I dove in there, the roof of that big bunker -- whoooooom..!  Up it went…coconut logs, boulders, earth..  I thought – I’ve been done in by my own stupidity.”

That would have been enough for most warriors.  But Jackson kept going.  By the time it was all over, he had taken out 12 bunkers and killed 50 enemy troops.

Almost singlehandedly, Jackson had secured the southern tip of Peleliu for the Marines.

A year later, at the White House, President Truman slipped the Medal of Honor around  Jackson’s neck.

“Well, old Truman is a good old boy,” Jackson said, “and he says “I’m proud of you.” He says “you have a fantastic citation.” And he said,“I appreciate everything you did, and so do the American people.”

Jackson now is one of just 10 living World War II Medal of Honor recipients. He told Fox News he doesn’t think he has many years left.  He would just like to hold his medal again before he, like so many other heroes of the ‘greatest generation,’ passes.

The FBI is simply hoping that someone out there will do the right thing.

The Congressional Medal of Honor Society has agreed to receive and return Jackson’s medal.  They are willing to accept it anonymously, or give credit to whoever chooses to return it.