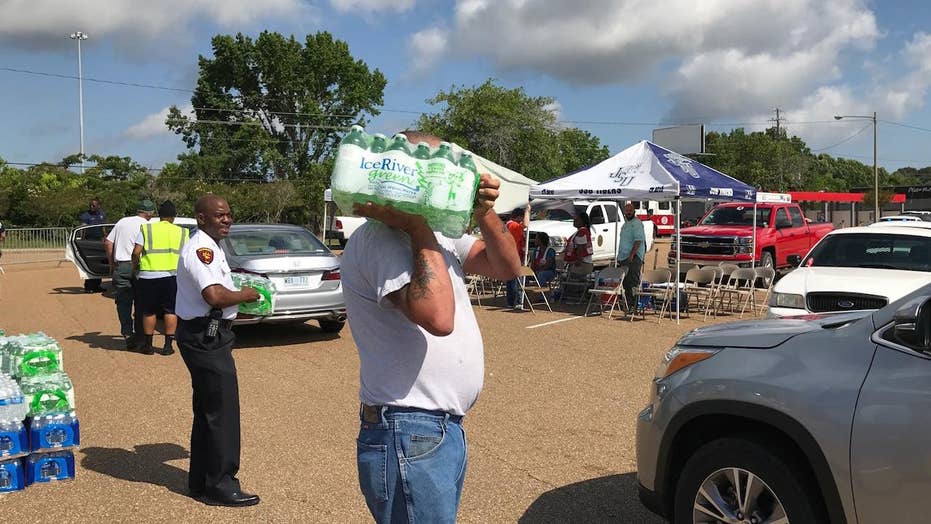 Nearly 30K without water in Mississippi after pipe burst

Crews are scrambling to repair a water main break in Vicksburg, Mississippi, that ruptured on Wednesday.

The city was forced to cut off water to nearly 30,000 people as crews began repair work that is expected to last for several days.

Mayor George Flaggs Jr. says a dam must be built to hold back floodwaters from the Mississippi River in order to dig out the pipe and fix the break. The water main is connected to the city’s water treatment plant. Work is expected to take at least five days leaving residents and businesses rushing to find ways to get water.

Free bottled water for cooking and drinking was handed out at a local mall on Thursday morning. The city will continue to hand out water to residents until the work is completed, according to Vicksburg Police chief Walter Armstrong.

“We don’t want anyone to go without drinking water and that’s we’re doing here this morning,” Armstrong tells Fox News. “Right now we’re anticipating the next five or so days that this project is going to take. But there may be some unforeseen situation that takes place that might make it even longer.”

Willie T. Clark says he has to use a friend’s bathroom outside the city limits to take a shower. He was among many residents who lined up in their cars to receive a case of water.

“I’ll be glad when they get it fixed,” Clark said with a laugh. “Things [do] happen,” and adds he had to go without water before during a previous outage.

Area schools were closed Thursday and there will be no school on Friday, according to WLBT. Local businesses were also affected with some closing and others remaining open with limited service.

Eddie Monsour is the owner of Monsour’s at The Biscuit Company. He says he will never close his doors for customers but adds many people thought he would be closed due to the water outage.

“We had an OK night but nothing like it usually is … a lot of people didn’t come downtown thinking we were going to be closed.”

“We had half of a normal day yesterday and I don’t know when it’ll be normal again, “Boone said. “We’re closed, we really can’t make coffee or espresso or wash our hands, dishes or anything.”