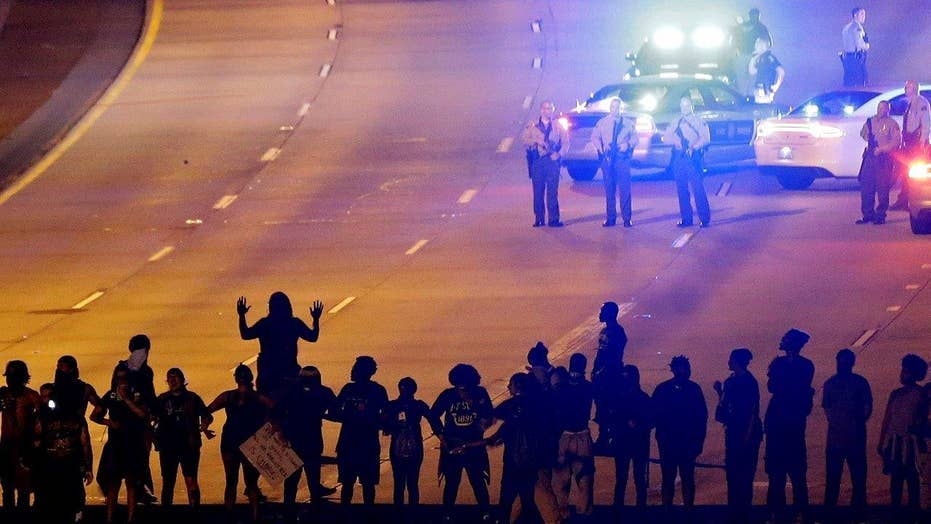 Drivers in North Carolina might soon be allowed to plow their cars through protesters forming human walls on the road.

A new bill approved by the state House will legally protect motorists who hit protesters blocking the road—as long as they “exercise due care,” according to The News & Observer in Raleigh.

House Bill 330 was approved in a 67-48 vote late last week. The bill was drafted in response to protests in Charlotte that paralyzed traffic last fall.

“I became concerned for drivers after watching the recent protests which turned into riots in Charlotte and other cities,” Republican Rep. Justin Burr, the bill’s sponsor, said to Fox News. “In a number of cases the protests turned riots resulted in violence and the terrorizing of unsuspecting motorist, their passengers and property.”

“I strongly believe North Carolina should protect law abiding drivers from facing civil liability if a protester is injured while attempting to illegally block traffic on a public highway or interstate.”

The bill, which still needs to be approved by the state senate, will protect drivers from lawsuits if they accidentally injure a protester obstructing traffic.

“A person driving an automobile who is exercising due care and injures another person who is participating in a protest or demonstration and is blocking traffic in a public right-of-way is immune from civil liability for the injury,” reads a passage from the bill. “A person shall not be immune from civil liability if the actions leading to the injury were willful or wanton.”

Democrats in the state say that the bill raises constitutional concerns due to the fact that it only applies to situations where the person struck is participating in a protest and blocking traffic.

“If you want to do something, you need to clear up the bill,” state Rep. Mickey Michaux, D-Durham County, told the News & Observer. “It basically is plain and pure unconstitutional.”

“I don’t know in what universe a person can run out in front of a car, and they’re going to win a personal injury case in North Carolina,” said Reives, who is also an attorney.

Rep. Burr says that the bill has been largely supported within the state.

“Many people who were affected by the violence and protests in Charlotte last year have voiced support for this bill,” he tells Fox News. “Drivers never have and never should be able to freely hit individuals in a public roadway. If in the event that a driver feels threatened by a protest that has grown out of hand, the law should not negatively affect the non-protesting, non-participating party from protecting themselves.”

Protests erupted all across Charlotte last September after the fatal shooting of Keith Lamont Scott, who was killed by police officers serving a warrant for a different man.

Soon after his death, several hundred protesters took to the streets, many of them blocking highways, during two days of violent rioting.

The bill comes as another bill, also prompted by the Charlotte protests, was rejected by a state House committee.

The “Economic Terrorism” bill would have beefed up penalties on law-breaking protesters. Democrats in the state said that the bill infringed on First Amendment rights.