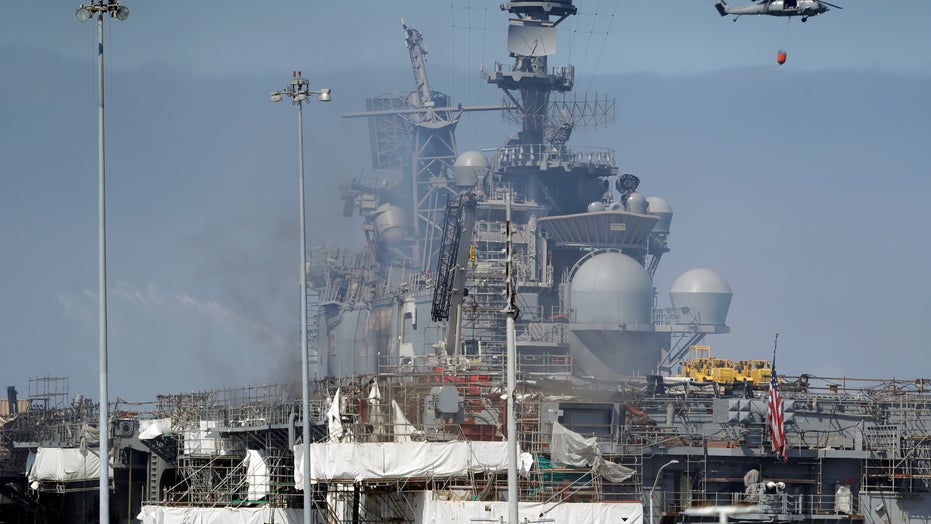 San Diego (AP) — The USS Bonhomme Richard has extensive structural, electrical and mechanical damage, a top naval chief said Friday after walking into the bowels of the charred warship that burned for more than four days off San Diego.

Chief of Naval Operations Adm. Mike Gilday pledged a thorough investigation into the Navy's worst U.S. warship fire outside of combat in recent memory. He said the probe will look at what caused the fire as well as whether there were enough sailors on duty when it happened and the circumstances around why a fire suppression system was deactivated when the blaze broke out early Sunday while the ship was docked undergoing maintenance.

The uniformed head of the U.S. Navy said he intends to make the results public.

“We need to go through this, catalog it all and get an understanding of whether or not we had it right," he said. “And if not, how do we quickly adjust across the fleet to make sure it doesn’t happen again?"

“I was able to get a good sense of the damage and the damage is extensive,” he said.

The future of the ship remains uncertain.

“I am 100% confident that our defense industry can put this ship back to sea, but having said that, the question is should we make that investment in a 22-year-old ship?" Gilday asked, adding that he's not making any predictions at this point.

The amphibious assault ships are among the few in the U.S. fleet that can act as a mini aircraft carrier. If the Bonhomme Richard is not repaired, it could cost the Navy up to $4 billion to replace it, according to defense analysts.

The Bonhomme Richard was nearing the end of a two-year upgrade estimated to cost $250 million.

Gilday said the Navy thought it had the fire under control Sunday night — only hours after it broke out that morning in the ship’s lower storage area, where cardboard boxes, rags and other maintenance supplies were stored. But winds coming off the San Diego Bay whipped up the flames and the fire spread up the elevator shafts and the exhaust stacks.

Then two explosions — one heard as far as 13 miles (21 kilometres) away — caused it to grow even bigger, Gilday said. The Navy is looking into what caused the explosions, though officials say they have found no indications yet of foul play.

Gilday said it appears the commanding officer who pulled sailors back from the ship following the explosions made “some very sound decisions in terms of how to attack the fire very deliberately." He commended the sailors who all train with fire departments and went back repeatedly into the dark, smoke-filled vessel with temperatures soaring in parts above 1,200 degrees Fahrenheit.

Industry experts also will look at the ship, including the design, which Navy officials have said may have contributed to the blaze getting out of control with its hangar-like well deck.

The difficulty fighting the flames was compounded because there was scaffolding, along with other maintenance equipment and debris in the way of firefighters.

More than 60 sailors and civilians were treated for minor injuries, heat exhaustion and smoke inhalation since Sunday.

The Navy will look at the ship’s procedures to mitigate the risks while it was docked for maintenance work, which often entails opening hatches, pulling out cables, welding, etc. — heightening the threat of a fire sparking. Those procedures are worked out with the ship’s commanding officer and federal fire officials for each individual ship.

In the meantime, the Navy is taking steps to prevent another tragedy. Over the next five days, all commanding officers in the Navy are being asked to ensure that their ships’ equipment is safe, sailors are up-to-date on their firefighting training and “our procedures are rehearsed so we can all learn from this tragedy,” he said.

For sailors who have been deployed on the Bonhomme Richard, seeing the blackened ship has been “a gut punch," and feels like losing their home, Gilday said.

“For every one of them, it’s a personal loss," he said.