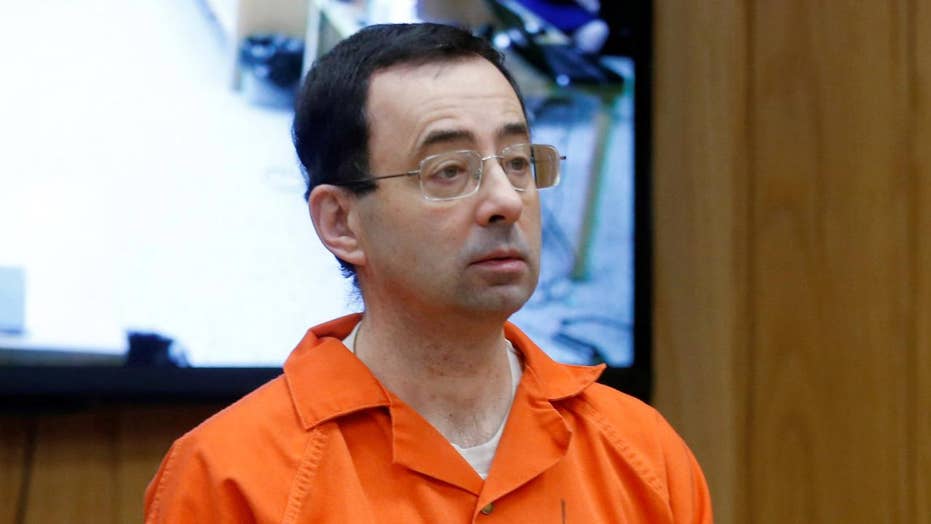 Rachael Denhollander, the first victim to speak out publically about Larry Nassar, says on 'The Story' that her family was spied upon by Michigan State University.

Rachael Denhollander, the first woman to publicly accuse Nassar of sexual abuse and the last of more than 150 women to confront him in court during his sentencing hearing for criminal sexual conduct, told Fox News she is “disgusted” by how MSU spent its time and resources amid the largest sexual assault scandal in campus history.

“As we were literally in court facing our abuser, MSU was paying a firm to monitor us,” Denhollander said. “The only other person that monitored my social media profiles in an effort to discredit me, was my abuser, Larry Nassar.”

Rachael Denhollander, center, listens to her attorney John Manly speak during a press conference after Michigan sports doctor Larry Nassar was sentenced to 60 years in prison on child pornography charges in Grand Rapids, Mich., on Thursday, Dec. 7, 2017. Denhollander is one of many former patients of Nassar who have accused him of molestation. (Mike Clark/The Grand Rapids Press via AP)

She added: “When MSU uses the same tactics, and prioritizes the same things as a pedophile, it’s clear where their priorities lie.”

“They say they want to support the survivors and work for justice, but, at the same time as they utter these words, they have attacked our character and motivations, accused us of being ambulance chasers looking for a payday, lied about our legislative package, lied about why mediation was stalled, and paid exorbitant amounts of money to monitor our social media activity,” she said. “Actions speak louder than words, and MSU’s actions leave no doubt about what they really care about, and it isn’t stopping sexual assault.”

The firm charged for more than 1,440 hours of work, done by 18 employees, whose hourly rates ranged from $200 to $600 per hour, the Lansing State Journal reported.

“The majority of our work involved crisis counsel to address the tragedy. We were not hired to monitor victims’ social media accounts. As with any assignment, we forwarded to our clients traditional media and publicly available social media pertaining to the horrible tragedy at MSU, including statements made online by the victims,” Weber Shandwick responded to Fox News. “The victims were and continue to be the most important voices in the conversation. Our work began in late December 2017 and ended in early March 2018 after we resigned the account.”

California attorney John Manly said it was “shocking” that Michigan State used $500,000 in taxpayer money to “spy” on the 150 alleged Nassar victims he is representing, calling it “further evidence of MSU’s continuing campaign to punish and revictimize these brave young women and girls.”

Manly says more action needs to be taken at the Lansing-based public university.

“We were already aware that MSU has hired private investigators to dig up dirt on Nassar’s victims and this is one more indication that John Engler and the MSU Board of Trustees continues to treat survivors as the enemy,” he said. “They need to be replaced by educators who are ready to reform the culture of sexual abuse at MSU, treat survivors with compassion and rebuild the tarnished reputation of this great University.”