A member of the MS-13 street gang gestures during an event in San Vicente, El Salvador. (Reuters)

But it is dealing with an issue not typically seen in the suburbs – a vicious gang infiltrating its schools and neighborhoods.

Away from urban areas that have seen a rise in gang-related activity, MS-13’s brutality is turning up in small towns and communities across the country – places not always equipped or ready to deal with the growing and alarming threat.

In the last year or so, police say, the gang known for its execution-style shootings and machete-hacking deaths has cropped up in a tiny Colorado town, two Virginia suburbs and Annapolis, Md. In parts of Long Island, N.Y. MS-13 is terrorizing once-sleepy neighborhoods that are now experiencing a scourge of violent deaths.

The worst is being felt in suburban areas that lack the resources and money to fight back against an international and well-funded organization known for its extreme brutality.

The violent street gang MS-13 has made its presence felt in small towns and suburbs. (Fox News)

“When it comes to smaller departments and less populated areas, those areas generally have less resources, so it becomes much more important to approach [the problem] from a task force or inter-agency model,” Patrick J. Lechleitner, special agent in charge of U.S. Immigration and Customs Enforcement’s homeland security investigations in Washington, D.C., told Fox News.

In multiple speeches over the past few months, Attorney General Jeff Sessions said the federal government will use “whatever laws we have” to eradicate MS-13, noting that the group leaves “misery, devastation and death in their wake.” Those promises have yet to trickle down to the local level, experts say.

MS-13 was started by Central American immigrants, mainly from El Salvador, in Los Angeles in the 1980s.

But the gang has now expanded its reach, making inroads even in rural stretches of the country.

Angel Ramos, 36, was arrested by Colorado authorities on Friday after he allegedly stabbed a woman with screwdriver and ran over her leg. Ramos, a member of MS-13, was previously deported and was wanted for murder in El Salvador, according to investigators. The attack took place outside Hillrose, which has a population of roughly 264, according to the latest census.

Police tape is seen in a wooded area in Long Island, New York where remains were discovered. It is believed that the victims were killed by MS-13 gang members. (AP)

The communities around Washington, D.C. have also become a hot bed of gang activity in recent years, and authorities there are struggling over how to deal with it.

“Northern Virginia is affluent, has plenty of resources, police and money. In areas where there are less of those things, there’s less money to combat any threat,” Lechleitner said. “When you see a transnational gang moving into an area, that can stress their resources.”

A 16-year-old Prince William County teen who was found after allegedly being abducted by an MS-13 member recently went missing again. In a separate incident, police in Springfield, Virginia charged two adults and three 17-year-olds with murder in connection with the “savage, brutal” killing of 15-year-old Damaris Reyes Rivas. Although police have not yet identified the killers, Rivas’ mother believes it was MS-13. 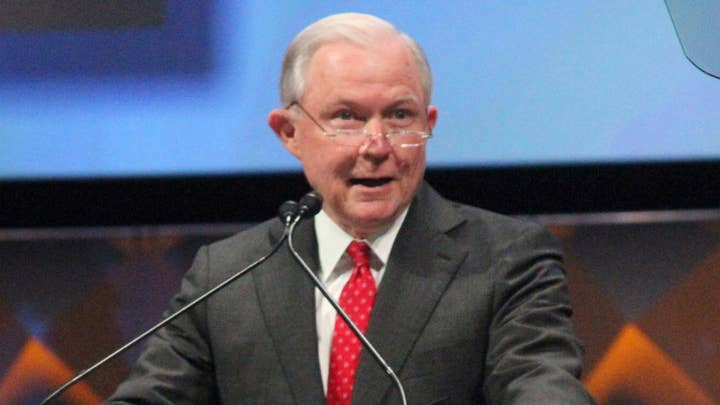 On Long Island in October, the bodies of two 16-year-old boys and one 19-year-old were discovered in wooded areas and police believe MS-13 members were behind the killings. That discovery brings the total number of suspected MS-13 victims found on Long Island over the last two years to 25.

Law enforcement in those areas say they are doing all they can to fight back against MS-13, but they are hampered by funding cuts that threaten to undermine their efforts.

The Northern Virginia Regional Gang Task Force was established in 2003 to coordinate 13 different agencies in addressing the growing gang problem in the fast-growing suburbs surrounding the nation’s capital. The task force, a collaboration between police chiefs and lawmakers, received an initial budget of $3 million a year that was earmarked in congressional legislation.

SESSIONS: ALL BETS ARE OFF IN HUNT FOR MS-13 GANG

But in 2012, Congress eliminated earmarks—provisions inserted into general spending bills that direct money outside of the typical funds-allocation process—so the task force, now mostly used for law enforcement activity, saw its budget shrink to $325,000.

And critical components of fighting gangs, including prevention and education programs for teenagers and parents, fell to the wayside, experts said.

“The big challenge is always funding. There’s a lot of rhetoric,” Jay Lanham, executive director of the Northern Virginia Regional Gang Task Force, told Fox News. “The problem is, we’re not seeing funding at the local level to combat this issue.”

He noted, however, that it’s not just a law enforcement issue.

“The police can’t solve it alone,” Lanham said. “We need the intervention, education and prevention.”