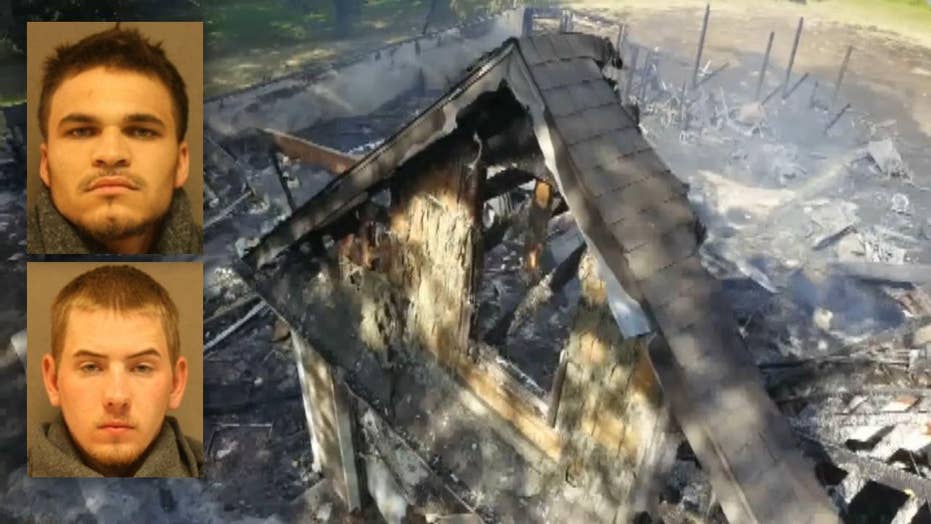 Men charged with allegedly setting woman on fire in robbery

20-year-old woman in Missouri claims two men tied her up, doused her with gasoline, set her on fire and told her to burn with the house after she refused to give them the combination to the gun safe.

Two Missouri men were charged after they allegedly bound and set a woman on fire when she refused to give them the combination to her safe, police said.

Vincent Rist, 22, and Antonio Bowen, 24, were arrested and charged after allegedly setting a woman on fire. (Johnson County Sheriff's Office)

The duo is accused of breaking into a 20-year-old woman’s home in Johnson County on Sunday and hitting her in the head with the lamp.

The incident nearly took a deadly turn when the woman wouldn’t tell them the combination to her gun safe, court documents stated. Rist and Bowen bound the woman’s hands and mouth with packing tape, poured gasoline on her body and set her on fire.

They told the woman she would “burn with the f---ing house."

The woman, who was not identified, managed to escape and put out the fire on her skin. She was taken to the hospital with first-, second- and third-degree burns covering 30 percent of her body.

The woman was said to be in fair condition as of Tuesday. All that remained of her home was charred bits of the frame and her belongings.

The men took several items, including a shot gun, before fleeing the home. They were later arrested and held on $250,000 cash bond.