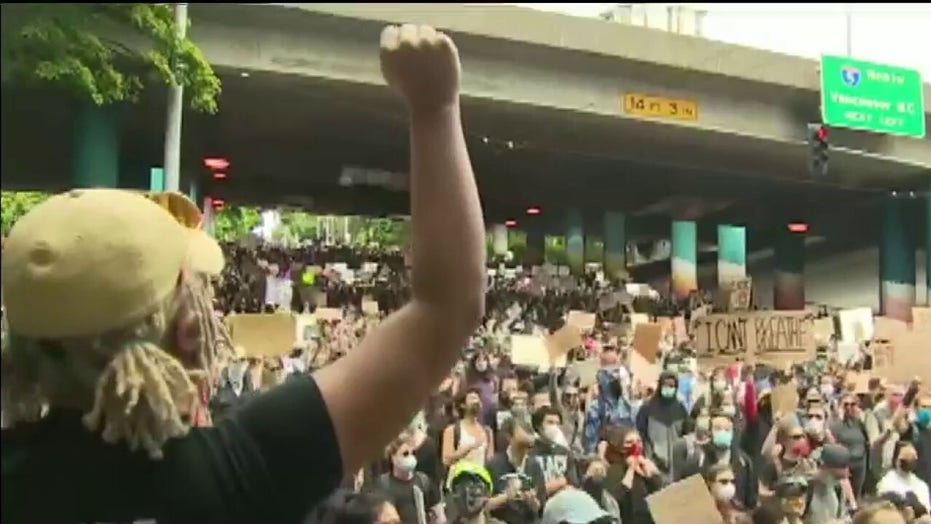 Protesters calls for the Seattle Police Department to be defunded; Dan Springer reports.

A suspect is in custody after he drove his car into a crowd of protesters in Seattle on Sunday night, police said. At least one person was shot during the incident.

Police said a black car drove into an area where protesters were gathered over the past week, hitting a barricade before the driver exited the vehicle holding a pistol.

A protester was purportedly captured on video trying to get to the driver's side door of the moving vehicle, before reaching in and then falling to the ground. A gunshot was heard in a video taken by a witness of the incident, according to Q13 Fox.

Seattle Fire said it transported a 27-year-old male with a gunshot wound from the scene. He's reportedly in stable condition. Police didn't say if the man who was shot was also the person captured on video apparently attempting to slow down the vehicle.

After driving into the crowd, the suspect exited the vehicle and was seen holding the gun as protesters scattered throughout the area, according to a video posted by Q13 Fox's Simone Del Rosario.

A gun was recovered from the scene and officials believe there are no other victims, according to Seattle Police.

The incident occurred in the Capitol Hill neighborhood where police said they deployed blast balls and pepper spray to temporarily disperse crowds on Saturday after individuals threw bottles and rocks.