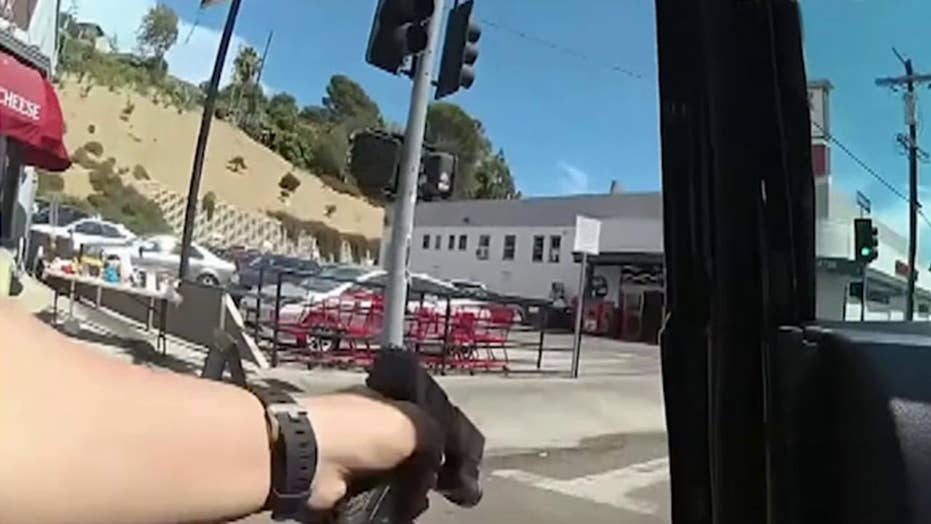 The Los Angeles Police Department shares its Critical Incident Video Release of the police pursuit, shootout and standoff at a Trader Joe's in the Silver Lake neighborhood of Los Angeles.

Police released new footage on Tuesday showing the crucial moments during a 2-hour standoff in July when a man shot and killed a Trader Joe’s employee in Los Angeles after critically wounding his grandmother and injuring another woman.

The Los Angeles Police Department released police bodycam and dashcam footage from the shooting that unfolded in the Silver Lake neighborhood on July 21.

Police also released multiple 911 calls reporting a shooting and a possible kidnapping there.

Gene Evin Atkins, 28, allegedly shot his grandmother seven times and wounded another woman, eventually forcing her into a car and taking off. Portions of the newly released footage showed Atkins driving recklessly through the Hollywood Division.

Atkins stopped the vehicle at a gas station and unsuccessfully tried to take another hostage. He then could be seen getting back in the car. Police trailed closely behind until the suspect started to fire through the back window.

Investigators say the gunman shot his grandmother and wounded his girlfriend before taking dozens hostage inside a Los Angeles supermarket; William La Jeunesse on the timeline of events.

Atkins eventually drove to the supermarket and ran inside after crashing his vehicle into a pole. He started to fire at police, who then returned fire.

The bodycam footage showed officers firing from behind their vehicle doors, eventually running behind a barricade across from the Trader Joe’s.

“Watch out! Get down! Get down! He’s shooting through the window!” one officer could be heard saying.

EMPLOYEE SLAIN AT TRADER JOE'S IN LA WAS 'MY WORLD,' BROTHER SAYS; OTHERS TWEET CONDOLENCES

During the crossfire, a bullet could be heard striking a metal pole directly above the officers’ heads.

Police release new bodycam and dashcam video of officers in pursuit of gunman in Los Angeles shootout. Jonathan Hunt has the details.

One of the bullets fired by police hit Atkins in the arm. Store manager Melyda Corado was struck by police accidentally, and she later died.

"Rather than act in a spirit of transparency, (police) have turned it into a public-relations effort to shine the most favorable light on the actions of the officers that were involved in this shooting," attorney John Taylor said at a news conference. "They want to control the narrative."

Atkins has been charged with murder in Corado's death as well as kidnapping and carjacking. His arraignment is set for Sept. 19. It's unclear whether he has an attorney.

Fox New’ Katherine Lam and The Associated Press contributed to this report.