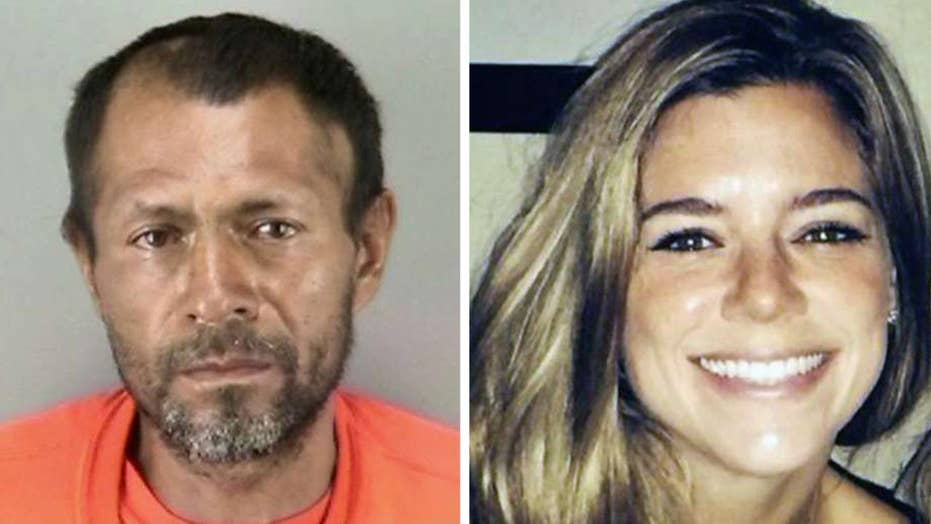 Prosecutors presented the weapon and demonstrated how it could have been hidden in the suspect's clothing on Thursday in the Kate Steinle murder trial, a point they have long used to disprove the defense's argument that the homeless illegal immigrant charged in the murder found the gun.

Jose Ines Garcia Zarate, 54, has been accused of fatally shooting Steinle on Pier 14 in San Francisco on July 1, 2015.

Assistant District Attorney Diana Garcia asked the bailiff to bring out evidence, including the semi-automatic weapon used to kill Steinle, as well as the clothes the suspect was wearing at the time.

Ravano was then asked to place the weapon in both the pants pocket and the jacket pocket, ultimately demonstrating that it could have been concealed.

While Garcia did not overemphasize the point, the prosecution’s argument has revolved around the notion that Zarate did not find the gun on the pier that day but rather brought it with him and hid it in his clothing.

Upon cross examination, defense attorney Matt Gonzalez asked why the suspect’s clothing had never been tested for gunshot residue, to which Ravano said that authorities knew the shot was fired from outside the pocket.

Upon a re-direct question, prosecutors asked Ravano, “and because Garcia Zarate threw it in the Bay?” Ravono replied, “yes.”

Ravano also admitted that in questioning Zarate after the shooting, investigators lied to him in order to “motivate” him to be more forthcoming in answering their questions.

The defense argued that the tactic elicited false responses from the suspect and that he didn’t fully comprehend what he was saying. After Zarate answered questions and would agree with police, he’d often be unable to repeat the question he’d been asked saying, “I don’t know.”

Ravano said that despite Zarate’s answers being inconsistent, he was not concerned with their validity.

But some of the lies, such as telling Zarate that the gun had been recovered, were ultimately proved to be true, Garcia later argued.

The prosecution brought out their final witness for the day, Dr. Michael Hunter, who is San Francisco's chief medical examiner and performed the autopsy on Steinle.

He showed the court two pictures of Steinle's wound and said it was "atypical," indicating that the bullet hit an "intermediary target" before hitting Steinle. The bullet was passed around to the jury to examine.

None of the members of the Steinle family were present in court.

Previous days in court have included testimony from witnesses on the scene and responding officers who handled evidence and investigation.

Prosecutors have charged Zarate with murder, alleging he intended to point and shoot the gun at pedestrians on the pier. Zarate has admitted to shooting Steinle, but says it was an accident.

Prosecutors and Gonzalez said the case boils down to whether Zarate pointed and fired the gun intentionally or the weapon accidentally discharged.

While Zarate’s immigration status is what brought the case into the national spotlight, jurors will not hear evidence about that, and it will not be a factor in the trial.

Steinle’s death became a signature issue for Donald Trump as he was running for president. He invoked the slaying in calling for the construction of a wall on the Mexican border.

Fox News’ Claudia Cowan and the Associated Press contributed to this report.