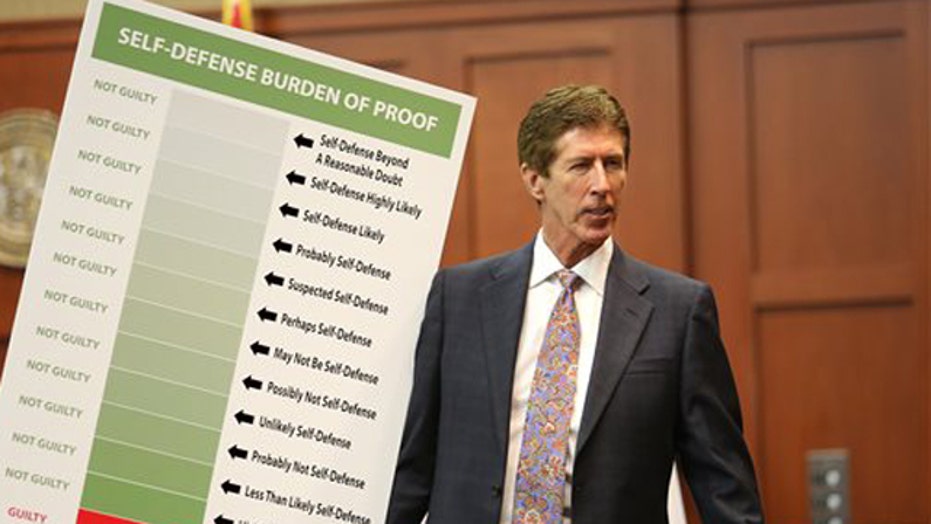 Powerful silence in Zimmerman closing and the 'child' card

Jurors in the murder trial of George Zimmerman adjourned deliberations for the night Friday, following closing arguments in which his attorney portrayed him as a neighborhood activist who shot Trayvon Martin in self-defense and prosecutors attempted to paint him as a wannabe cop whose misguided suspicion resulted in the teen’s death.

The six Florida women who make up the jury were handed the case in early afternoon and deliberated until 6pm ET. They were scheduled to resume at 9 am Saturday.

At one point during afternoon deliberations they sent out a request for an inventory list of evidence, which was provided.

They were expected to deliberate through the weekend, if necessary.

Meanwhile, small groups of people began gathering outside the courthouse, awaiting their decision. They can acquit the 29-year-old neighborhood watch volunteer or convict him of either second-degree murder or manslaughter in the death of the 17-year-old Martin.

Zimmerman shot Martin as the two fought following a confrontation in the gated Sanford community where Zimmerman lives.

"Your verdict should not be influenced by feelings of prejudice, bias or sympathy," Judge Debra Nelson told the panel, reading from a 27-page set of instructions. "Your verdict must be based on the evidence, and on the law contained in these instructions."

Earlier, Zimmerman defense attorney Mark O'Mara urged jurors to let the Florida neighborhood watch volunteer "get back to his life" by finding him not guilty of murder or manslaughter in the 2012 confrontation that ended in the death of 17-year-old Trayvon Martin, saying the state prove Zimmerman did anything other than defend himself.

In a low-key and methodical presentation that began early Friday, defense attorney Mark O'Mara urged the all-female, six-member jury to not “fill in the gaps” or “connect the dots,” but to stick to facts. He ridiculed prosecutors for their forceful portrayal of Zimmerman as a wannabe cop who profiled an unarmed teen when he cut through the gated community where Zimmerman lived.

"That is not an unarmed teenager!" O'Mara said, hoisting a chunk of concrete to represent the pavement Martin allegedly bashed Zimmerman's head against before the fatal shot.

For most of the three-hour presentation, O'Mara's style was in sharp contrast to the fiery summation delivered by lead prosecutor Bernie de la Rionda a day earlier, in which he forcefully told jurors that Zimmerman's inaccurate "assumptions" about Martin were responsible for the teen's death on Feb. 26, 2012. But O'Mara became more emotional toward the end, reminding jurors that even a reasonable doubt in their minds that Zimmerman committed a crime can only mean acquittal.

"It is a tragedy, truly," O'Mara said. "But you can't allow sympathy."

O'Mara's summation was followed by the prosecution's rebuttal, in which prosecutor John Guy told jurors that Zimmerman would have had to have faced deadly force to be justified in shooting Martin. Guy showed a picture of Zimmerman’s scalp and downplayed cuts on it.

“Did that man need to kill somebody? Kill a teenager?

“Did he really need to shoot, did he have to shoot, Trayvon Martin?” Guy asked the jury. “No he did not.”

Guy said "only two people on this Earth" know what really happened that night, adding that one of them cannot testify.

Then, quoting Voltaire, Guy said in a hushed tone: "To the living we owe respect, to the dead we owe the truth."

Earlier, O’Mara showed jurors an animated reconstruction of the shooting, depicting Martin striking Zimmerman first before a scuffle ensued. The animated re-enactment was not admitted into evidence earlier, as Nelson ruled it could only be used during the defense's summation. O’Mara played 911 calls as the jury watched the animation, recreating Zimmerman's version of the fatal confrontation — that he fired the fatal shot as the teen straddled him and bashed his head against the pavement.

“He’s not guilty of anything but protecting his own life," O'Mara said of Zimmerman.

O'Mara disputed prosecutors’ claims that Zimmerman was a “crazy guy” who snapped when he spotted Martin because there had been a series of break-ins in the neighborhood, mostly by young black men.

"That presumption isn't based on any fact whatsoever," O'Mara told jurors.

O'Mara also asked jurors to ponder what Martin was doing during the four minutes from when he started running at the urging of a friend he was talking to on a cell phone to when he encountered the neighborhood watch volunteer. Martin was planning his attack instead of going back to the house where he was staying, said O'Mara, who let four minutes of silence elapse in court to dramatize the amount of time.

"The person who decided ... it was going to be a violent event, it was the guy who decided not to go home when he had a chance to," said O'Mara.