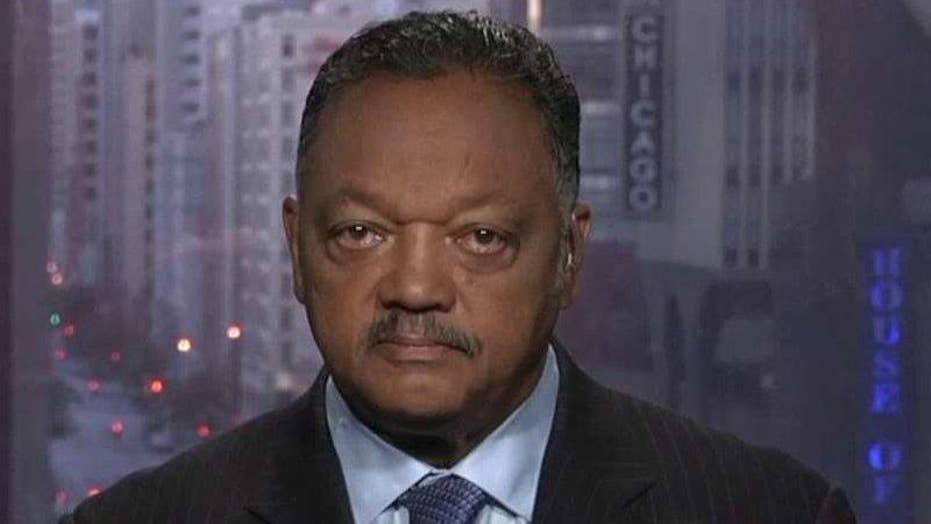 Rev. Jesse Jackson: There's a 'backlog of pain' in America

A journalist at The Root says the Rev. Jesse Jackson sexually harassed her after a speech at a previous employer, claiming he grabbed her thigh before saying, “I like all of that right there!”

Danielle Young, a writer-producer at The Root, detailed her experience with Jackson in a 2,000-word post published on Monday, alleging that Jackson touched her inappropriately while taking a photo with him after a keynote speech by the “living legend” at a “very popular” media company.

“I walked toward Jackson, smiling, and he smiled back at me,” Young wrote. “His eyes scanned my entire body. All of a sudden, I felt naked in my sweater and jeans. As I walked within arm’s reach of him, Jackson reached out a hand and grabbed my thigh, saying, ‘I like all of that right there!’ and gave my thigh a tight squeeze.”

The unexpected touch, Young said, left her “shocked, to say the least,” and uncomfortable in a room full of colleagues. So, she started to laugh, she said.

“And I continued to giggle as he pulled me in closer, stared down at my body, smiled and told me he was only kidding,” Young continued. “The entire time, my co-worker snapped photos.”

Young’s post included seven photos of herself with Jackson, including one in which Jackson’s right arm is around her neck while his left arm embraces Young’s arm across her body. Both Young and Jackson are smiling in five of the photos. In another, Young, who said she was “visibly uncomfortable” at the time, is pointing directly at the camera, “asking [Jackson] if we can just take the picture,” according to her post.

“When I was finally able to pull myself away from the Rev. Jackson’s grip, I was deflated,” Young said. “I admired this man who marched alongside the Rev. Martin Luther King Jr., a man who represented our ability to overcome, a man who is really … just a man.”

After contacting a former colleague, Young said she realized her take on the situation was not unique.

“I remember him being inappropriate with all the women,” Young said, recalling the co-worker’s take. “And I also remember you telling me that he did something more with you. And then we brushed the shit off and chalked it up to him just being a dirty old man.”

Young said she never wanted to come forward with her accusation of sexual harassment because it was “just a thigh grab,” barely even a “blip on anyone’s radar,” including her own.

“Jackson’s tight grip doesn’t even measure up to what any of the victims of Harvey Weinstein and others have had to endure; however, I was uncomfortable and had to swallow the lump in my throat as I stood right beside the civil rights leader,” Young wrote. “… My silence gave Jackson permission to continue grabbing at the next pair of thick thighs he liked. I’m hoping that my voice does the opposite.”

Young also accused director John Singleton of being inappropriate toward her while at the American Black Film Festival in June. After interviewing Singleton and the cast of his new show, Young said the director best known for “Boyz n the Hood” grabbed her wrist and pulled her toward him while saying, “Bring that juiciness over here.”

Singleton then leaned forward and kissed Young on the cheek, she said.

“I said, ‘Oh, oh, OK,’ and stood up, embarrassed because everyone was definitely still in the room,” Young said. “Mostly, no one reacted, aside from a few seconds of laughter. A few people asked Singleton for a photo, and I didn’t. He noticed.”

Young then took a selfie with Singleton and posted it onto Instagram, complete with a caption of what Young said the “legend” uttered to her: “Oooh, I’m gonna grab on tight to you.”

Another woman working at the festival then confirmed Young’s suspicion regarding the unwanted sexual attention.

“She said, ‘Yeah, girl, I heard he likes big girls,’” Young said. “ … The woman’s admission was so pedestrian, I was convinced she was simply reacting the same way many women do to unwanted sexual attention — she ignored it. I tried to ignore it, but I felt weird.”

In a statement to The Root, Jackson said: “Although Rev. Jackson does not recall the meeting three years ago, he profoundly and sincerely regrets any pain Ms. Young may have experienced.”

Young, meanwhile, said she’s no longer blaming herself for the “unwanted sexual attention” that came her way.

“It’s not my fault if a man wants to turn a professional environment into a playground of flirting, grabbing and sexual talk,” Young wrote. “I didn’t ask for the attention just by existing.”