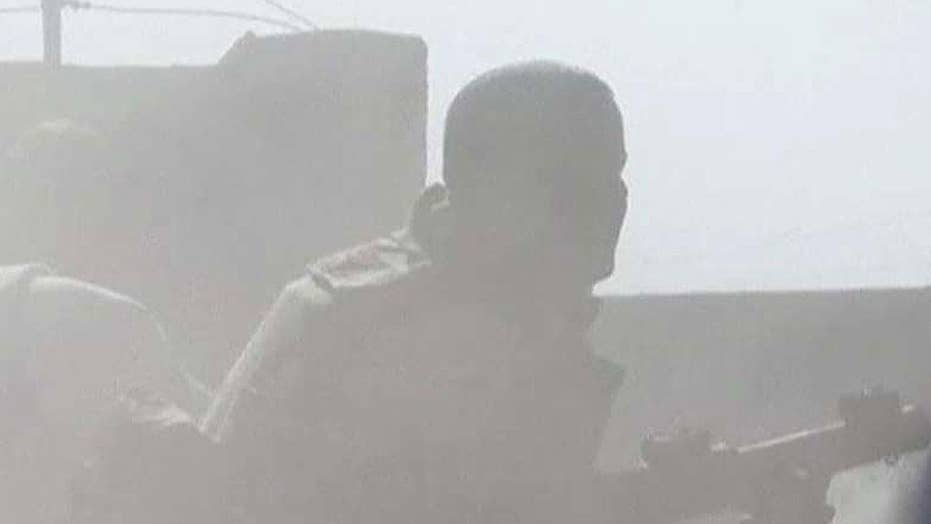 Federal lawmakers are investigating how a former Iraqi insurgent fighter was able to lie about his identity and still get through America’s ‘extreme’ vetting process.

The Senate Homeland Security and Governmental Affairs Committee has asked Attorney General Jeff Sessions to find out why the terror suspect’s pending arrest was allegedly spiked just over a week before the election. Trump had run on a tough-on-terror platform and had been critical of President Obama’s refugee policy.

“The ‘resistance’ allegedly occurred a few weeks before the 2016 election, and local authorities believed the lack of progress in this case was handled inadequately,” Johnson wrote.

The suspect is an Iraqi man who had entered the U.S. under a false name. His real name was not released.

Fox News has learned the JTTF confirmed through U.S. Special Forces who encountered the suspect during operations that he claimed to have participated in attacks against American troops as an insurgent.

At some point, the Iraqi entered the U.S. through the refugee program. His activities in the U.S. triggered an investigation by JTTF members, who planned to charge him with visa fraud while they investigated possible further charges.

Sources say the case demonstrates the challenge of vetting people with little documented history in countries where there’s no paper trail.

Officials from the U.S. Department of Justice, the U.S. attorney’s office in Western Texas and the Joint Terrorism Task Force refused comment.

U.S. officials said earlier this week that nearly a third of the FBI’S 1,000 ongoing domestic terrorism investigations involve those admitted to the U.S. as refugees.

Claude Arnold, a former U.S. Immigration and Customs Enforcement special agent in charge of Homeland Security Investigations, said the refugee program is vulnerable to abuse by terrorists seeking to enter the U.S. to harm Americans.

“Refugees are admitted to the U.S. based on the story they tell of persecution, and they are not required to produce identity documentation or other types of documentation,” Arnold said. “If the person seeking entry is a persecutor, he would have specificity in his story that matches information obtained by U.S. Customs and Immigration Services personnel adjudicating the events.”

In the case of terrorists in Iraq, ISIS has taken over whole cities, raising the likelihood of identity theft and document forging, Arnold said.

“That creates great potential for an ISIS fighter to assume a false identity and engineer a refugee claim,” he added.

Iraq is not included in the most recent travel ban instituted by President Trump because the Iraqi government has assured the U.S. that information will be provided to properly vet refugees.

“In the case of Iraq, when we had troops on the ground, we were able to get intelligence on bad actors,” Arnold said. “Now we rely on the Iraqi government to not only obtain the intelligence, but also to relay it to us.”

In perhaps the most glaring example of Iraqi terrorists getting into the U.S, two Iraqi refugees living in Bowling Green, Ky., were convicted in 2013 of plotting to help Al Qaeda. The men were also hit with additional charges after their fingerprints matched ones found on IEDs used in Iraq to kill U.S. soldiers.

Arnold said it is important not to let politics get in the way of security and justice.

“Letting the terrorists in to the country through the refugee program can result in citizens and residents being harmed. We cannot afford to make that mistake,” Arnold said.