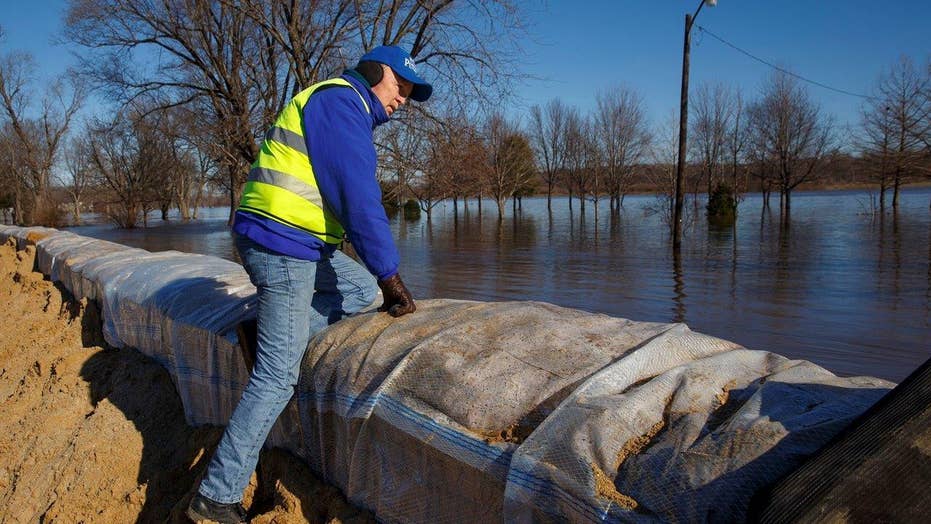 President Obama declares federal disaster in Missouri due to floods

KINCAID, Ill. – The Mississippi River and many of its tributaries continued their retreat Sunday from historic and deadly winter flooding, leaving amid the silt a massive cleanup and recovery effort likely to take weeks if not months.

The flood, fueled by more than 10 inches of rain over a three-day period that began Christmas Day, is blamed for 25 deaths in Illinois and Missouri, reflecting Sunday's discovery of the body of a second teenager who drowned in central Illinois' Christian County.

The Mississippi River was receding except in the far southern tip of both states. The Meramec River, the St. Louis-area tributary of the Mississippi that caused so much damage last week, already was below flood stage in the hard-hit Missouri towns of Pacific and Eureka and dropping elsewhere.

But worries surfaced anew Sunday along the still-rising Illinois River north of St. Louis, where crests near the west-central Illinois towns of Valley City, Meredosia, Beardstown and Havana were to approach records before receding in coming days.

In Kincaid, a 1,400-resident central Illinois town near the South Fork Sangamon River, Gov. Bruce Rauner toured flood-damaged homes Sunday as Sharon Stivers and other residents piled ruined furniture, appliances and clothes along the street for disposal crews to pick up. Mike Crews, Christian County's emergency manager, said the worst of the inundation appeared to be past, "until the new weather comes," citing the prospect of potentially heavy rain later in the week.

Stivers shares a home with her 45-year-old daughter battling breast cancer, along with a granddaughter and four dogs. Floodwaters got 4 feet into their home, located in an area where flood insurance wasn't available.

Across the street, Theresa Gibson was getting help from relatives and friends clearing out what they could salvage after the flood reached 18 inches into her home, buckling newly finished oak floors and saturating walls.

"This is just horrible," Gibson, 50, lamented, noting how the fast-rising waters had allowed her only enough time to fill a couple of suitcases. "We've had floods before, but nothing like this."

In Illinois' Morgan County, home to the 1,000-resident village of Meredosia, locals were keeping wary eyes on levies fortified with 50,000 sandbags. As of midday Sunday at Meredosia, the Illinois was more than 10 feet above flood stage and pressing toward an expected crest Tuesday roughly a half-foot short of the record set in July.

While optimistic those levies would hold, Jacksonville-Morgan County Emergency Management Director Phil McCarty said the prospect of flooding during the chill of winter carried dangerous health risks, including hypothermia.

"In '93 that water came up and stayed on the levees for several months," Simmons said. "This flood came up quick and went down quick."

St. Louis-area cleanup largely was focused around the Meramec. Two wastewater treatment plants were so damaged by the floodwaters that raw sewage spewed into the river. Hundreds of people were evacuated in the Missouri communities of Pacific, Eureka, Valley Park and Arnold, where many homes took in water.

In southeast Missouri, up to 30 homes and several businesses were damaged in Cape Girardeau, a community of nearly 40,000 residents that is mostly protected by a flood wall. The Mississippi peaked at 48.9 feet Friday night, four-tenths of a foot above the 1993 record, but short of the 50-foot mark projected. Nearby levee breaks in other places kept the crest down.

Amtrak service between St. Louis and Kansas City was back in business on Sunday, four days after high water that reached the tracks at some locations forced the passenger service to be halted.

Moderate Mississippi River flooding was expected in Memphis, Tennessee. The National Weather Service issued a flood advisory for the Cumberland River at Dover, Tennessee, through Monday evening. Minor flooding along the Ohio River was affecting the Kentucky cities of Owensboro and Paducah, and the crest wasn't expected until Thursday.