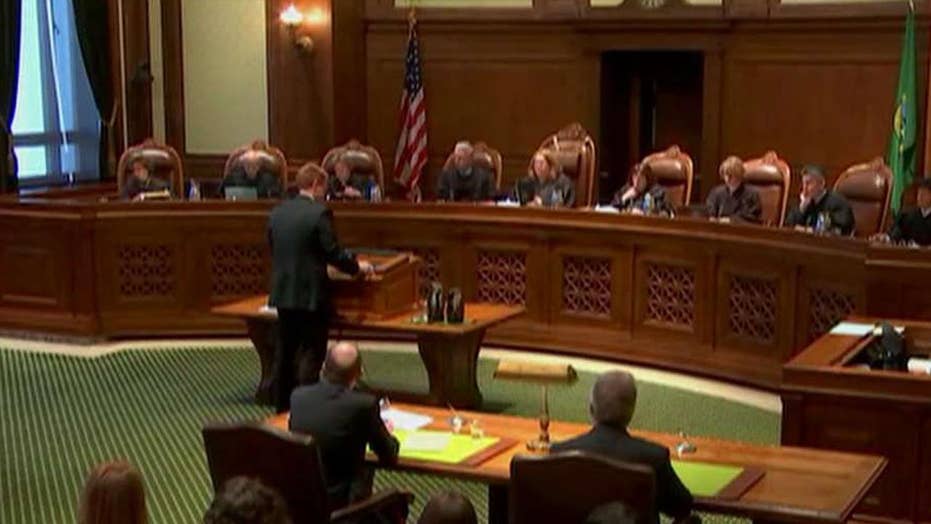 There’s growing friction between the Department of Homeland Security and judges across the country. It’s over the recent arrests of illegal immigrants by Immigration and Customs Enforcement at courthouses.

“Immigrants are throughout all of our communities,” said Benson, “and they’re terrified right now.”

Some judges complain that immigrants are now afraid to show up at courthouses, even when they are there as victims seeking justice.

The state Supreme Court chief justices in California and Washington State have each written letters to DHS Secretary John Kelly asking that ICE agents stay away from court buildings. In her letter, California Chief Justice Tani Cantil-Sakauye wrote “immigration agents appear to be stalking undocumented immigrants in our courthouses to make arrests…Courthouses should not be used as bait in the necessary enforcement of our country’s immigration laws.”

“These developments are deeply troubling because they impede the fundamental mission of our courts,” Fairhurst said, “which is to ensure due process and access to justice for everyone, regardless of their immigration status.”

Fairhurst told Fox News she’s been hearing reports of undocumented immigrants not showing up for court hearings or appointments to receive protective orders against abusive partners.

“I have a duty and responsibility to speak up when the administration of justice in Washington State is impacted by policies and activities,” Fairhurst said.

But Justices Fairhurst and Cantil-Sakauye are coming under fire from critics who say they are taking a political stand and undermining the credibility of their courts. Retired Washington State Supreme Court Justice Richard Sanders said judges should refrain from lobbying the federal government.

“It’s not up to the judiciary to tell ICE where and how and when to detain people,” Sanders said, “The court is there to adjudicate cases and controversies.”

ICE officials defend the courthouse enforcement saying it’s usually a last resort. They maintain it’s much safer for the agents to make arrests at courthouses than on the street or at the illegal immigrant’s home. In a statement, ICE wrote “Many of the arrest targets ICE has sought out at or near courthouses are foreign nationals who have prior criminal convictions in the U.S.”

Among the convicted criminals targeted for courthouse arrest was Diddier Pacheco. The Mexican national was in Multnomah County Courthouse in Portland, Oregon last month pleading guilty to DUI when two ICE agents showed up to arrest him. Judge Monica Herranz is now under investigation for allegedly allowing Pacheco to slip out an employee exit to evade the ICE agents.

Jessica Vaughan of the Center for Immigration Studies said judges are overstepping their authority.

“I think we’re coming to a showdown between the federal government and local jurisdictions that, for political reasons, want to interfere with immigration enforcement,” Vaughan said.

Department of Homeland Security and Department of Justice responded to the California Chief Justice. In a letter signed by Attorney General Jeff Sessions and DHS Secretary John Kelly, the federal government admonished Justice Cantil-Sakauye for using the term “stalking” to describe ICE agents.

“Stalking has a specific legal meaning in American law, which describes criminal activity,” the letter said. “The arrest of persons in a public place based upon probable cause has long been held by the United States Supreme Court as constitutionally permissible.”

The letter also encourages Cantil-Sakauye to raise her concerns with politicians in California who support sanctuary city policies. Officials argue the release of criminal aliens from jails that refuse to honor ICE detainer requests force agents to make arrests in places like courthouses.