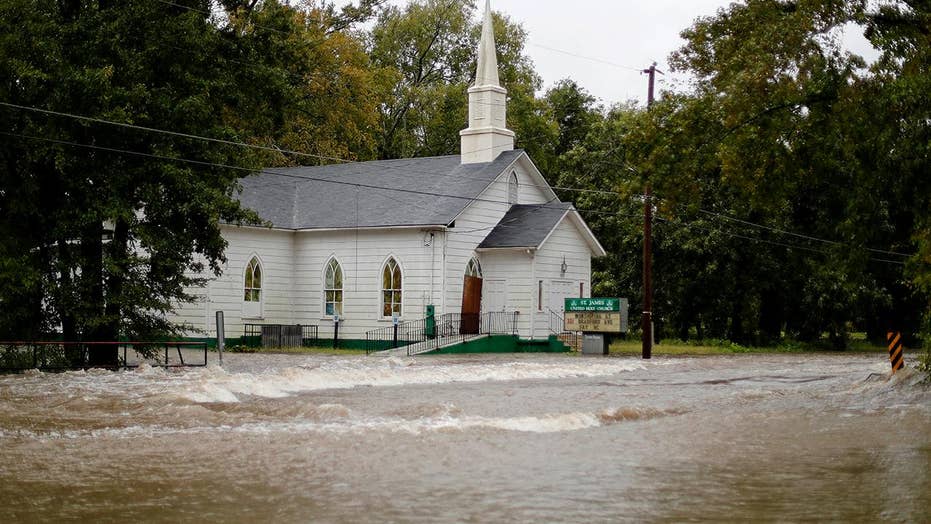 Jeff Flock reports from a neighborhood under water and without power.

When Hurricane Florence set its sights on the Carolina coast last week, Tony Alsup decided it was time for him to head into the storm zone to help clear out animal shelters in its path.

The 51-year-old trucker from Tennessee has transformed an old school bus into an animal transport on wheels, with the words "EMERGENCY ANIMAL RESCUE SHELTER" on the side. In his first trip to South Carolina, Alsup was able to rescue 53 dogs and 11 cats, the Greenville News reported.

“I love it,” he told The Greenville News. “People don’t believe me, they say it’s got to be barking crazy. But no. They know I’m the Alpha dog and I’m not here to hurt them.”

In photos posted to Facebook, the group of dogs can be seen in kennels stacked to the roof hanging out in the back of the school bus awaiting their next stop.

"It’s all true - Tony swooped in at 4am Wednesday morning to pick up our 'leftovers' - the dogs with blocky heads, the ones with heartworm. The ones no one else will ever take. And he got them to safety," The Saint Frances Animal Center in Georgetown, S.C. said in a Facebook post. "Not the most conventional evacuation, but surely the one with the most heart.

WEAKENED FLORENCE REMAINS DANGEROUS AS IT WORKS ITS WAY NORTH

After picking up the animals in four South Carolina towns, Alsup transported the group to a shelter in Alabama, where they will be spread out to other shelters across the country and hopefully be adopted.

“It’s so easy for people to adopt the small pets and the cuties and the cuddly,” he told the paper. “We take on the ones that deserve a chance even though they are big and a little ugly. But I love big dogs, and we find places for them.”

ANIMALS RESCUED FROM FLORENCE FLOODWATERS, AFTER PETS LEFT BEHIND OR FORGOTTEN

The 51-year-old has been involved in large-scale animal rescues using his bus since last year, when Hurricane Harvey inundated Texas with floodwaters and during Hurricane Irma. He felt compelled to help out after watching how shelters became overcrowded with lost or rescued animals.

“I thought, well what can I do?” he told the Washington Post. “I’ll just go buy a bus.”

After his trip to South Carolina, he has since headed back into the storm zone. In a series of videos posted to Facebook, Alsup said that he was headed towards the Lumberton area of North Carolina where a dam could possibly collapse after being overtopped by floodwaters spawned by Florence.

"Pray for those people in Lumberton that that dam doesn't collapse, but we're trying to get people and pets out of the way before this thing breaks," he said. "It's better to be safe than sorry. Don't be somebody who thinks its better to be lucky than safe, just get out of the way."