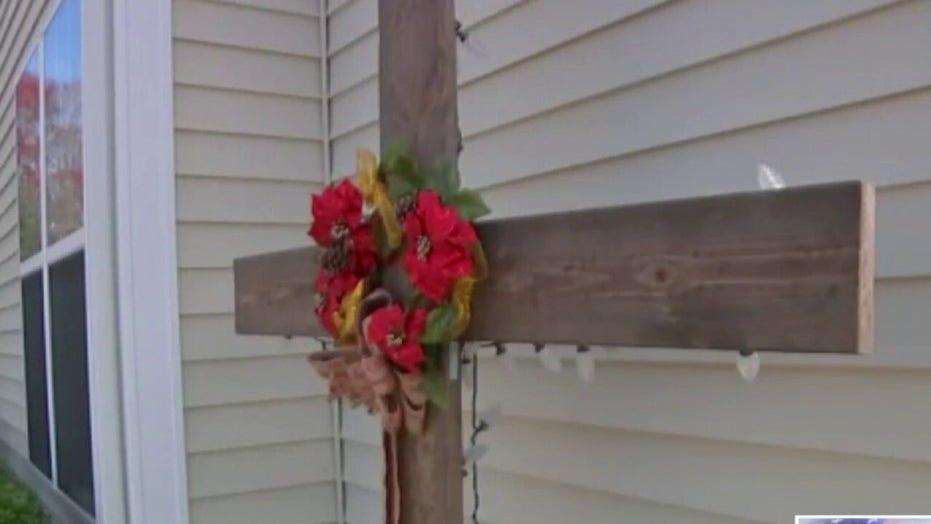 Fox News contributor Kat Timpf says while she personally is not religious it is 'ridiculous' for the family to be fined by their homeowners association for their Christmas cross decoration.

A Raleigh homeowners association told one couple that the cross in their front yard was a violation because the symbol shared no connection with Christmas.

James Faison and his wife, who have lived in the North Carolina community for five years, put up a 6-foot cross as a Christmas decoration.

In response, the local HOA requested that the family take it down as it was not considered a Christmas decoration. Instead, the cross is considered a symbol of Easter or Passover, the HOA said.

"The cross represents the death of Jesus Christ who died for our sins so we can have eternal life,” the HOA statement, obtained by WTVD-TV, the ABC owned station in Raleigh-Durham, read. “The Christmas season is associated with the birth of the Savior such as nativity scenes would be appropriate representation of the season.”

“The Board believes that the Bible is very clear on the distinction between these two major events in Christ's life on earth.

Instead of taking the cross down, the Faisons can pay a $100 fine.

"They didn't say "Go look, here are the bylaws as it relates to HOA and the community, this is the reason why, they didn't say any of those things," Faison said during an interview. "But they asked me to provide biblical references."

The Faisons provided the references to connect the two, and the case is still under review. In the meantime, the cross remains standing.