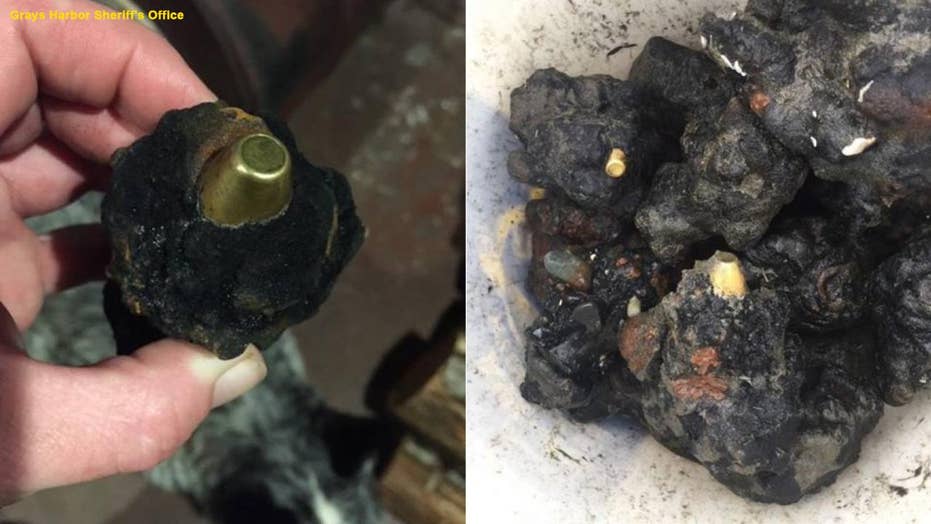 Military rounds dating back to the 1940's have been discovered on beaches in Washington state.

Authorities in Washington state issued a warning to beachgoers after explosive military rounds were discovered over the weekend.

The Grays Harbor County Sheriff's Office said in a Facebook post on Sunday it has received "multiple reports" of 20-millimeter anti-aircraft "high explosive" rounds being located in the North Beach area.

The sheriff's office said the rounds are described as between 6-to-8 inches in length and 20 millimeters in diameter. They are believed to be from the 1940's, which "makes their stability unknown." Authorities said they may explode upon impact.

Military rounds dating back to the 1940's have been discovered on beaches in Washington state. (Grays Harbor Sheriff's Office)

"They have the resemblance of large rifle ammunition," the sheriff's office said. "Many of these rounds have been located encased in a black rock or sludge matter."

Grays Harbor County Chief Criminal Deputy Brad Johansson told Q13 News that a person found four to six shells over the weekend that were live and still dangerous because of their explosive tip.

After the post on Facebook, Johansson said the sheriff's office said the shells have been showing up for years and that some people may even be collecting them as keepsakes from beach trips.

Johansson said the rounds are believed to have been dumped off a military ship during World War II or buried by the military on a county beach.

“I think this is something we’re going to be seeing for quite a while,” he told Q13 News.

The sheriff's office is asking anyone who locates a round or may have taken one home as part of a keepsake to leave it alone, mark its location, and call the Grays Harbor County Dispatch at 360-533-8765.