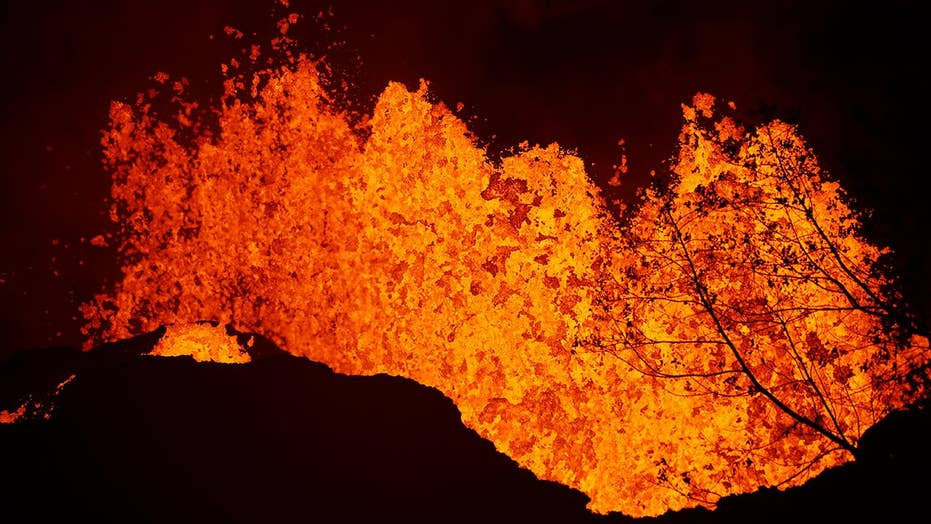 Lava from Hawaii volcano reaches the edge of a power plant

FNC’s Jeff Paul on the problems that could occur if lava from the Big Island’s Kilauea Volcano reaches a power plant facility.

The roads near the Kilauea volcano in Hawaii burned bright blue on Wednesday as buried vegetation produced dangerous levels of methane gas that ignited in road cracks.

“Methane gas can seep into subsurface voids and explode when heated," emerging "from cracks in the ground several feet away,” the United States Geological Survey warned. “When ignited, the methane produces a blue flame.”

The highest concentration was near the Leilani Estates Subdivision.

The blue flames are the latest reminder of the dangerous and escalating situation on the Big Island.

A similar blue-flame phenomenon has been witnessed at the Kawah Ijen volcano in Indonesia. In that situation, sulfuric gases burned parallel to lava, which gave off an electric blue glow.

Hawaii’s volcanic eruptions have been steadily on the rise over the past two weeks, crushing cars and torching homes. Thousands of residents have been evacuated. Some are living in one of three Red Cross shelters, while others have moved in with friends and family.

“The house is literally falling into the crack system,” he said, adding that his neighbors had lived there since 1991 and raised children.

“This house will not be lived in again … ever,” Hunt said.

The eruption of Kilauea sparked safety warnings about toxic gas on the Big Island’s southern coastline, after lava began flowing into the ocean and setting off a chemical reaction.

The molten rock started pouring into the sea over the weekend. It has been generating plumes of lava haze --  “laze” -- as it interacts with seawater. Made out of dense white clouds of steam, toxic gas and tiny shards of volcanic glass, the laze “looks innocuous, but it’s not,” Janet Babb, a geologist with the Hawaiian Volcano Observatory, told The Associated Press.

Babb warned that even though the laze itself is not enough to cause serious burns, people should maintain a safe distance.

There has been a continuous low-level ash emission from Kilauea’s summit, with larger explosions every few hours, USGS geophysicist Mike Poland said.

On Monday, lava entered, then stalled on, the property of a geothermal plant near one of Kilauea’s new volcanic vents. Officials removed 50,000 gallons of stored flammable gas from the plant earlier this month to reduce the chance of explosions.

Kilauea is one of the most active volcanoes in the world, and its recent activity has attracted tourists from across the globe.

There's no telling when Kilauea’s current state of instability will end. Researchers at the Hawaii Volcano Observatory say this year’s eruption is similar to one that occurred in 1955. That explosion lasted three months and produced 24 vents.

When all was said and done, nearly 4,000 acres were covered in lava including neighborhoods, roadways and sugar cane fields.