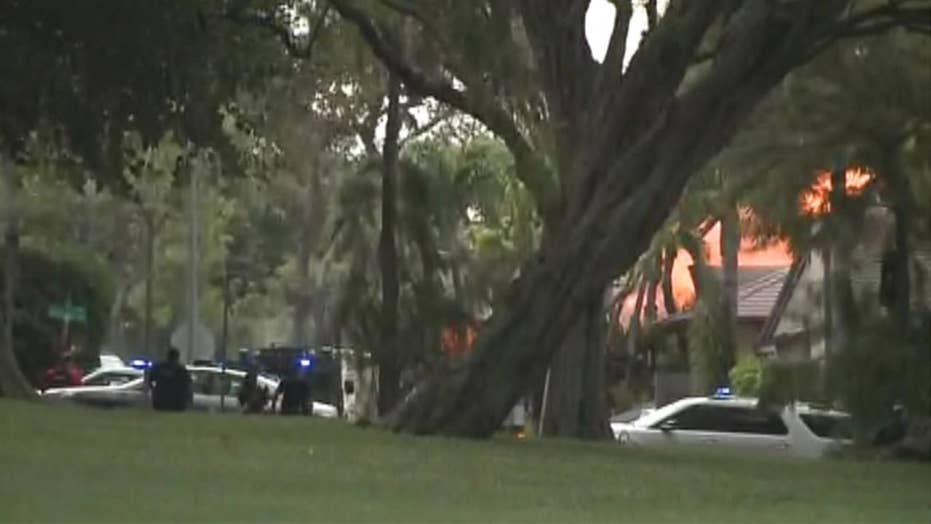 Suspect's and several neighboring homes on fire after man reportedly opened fire on police officers responding to an assault call near the base of Diamond Head.

A Hawaii man who is suspected of stabbing a landlord before fatally shooting two police officers at a Honolulu home on Sunday had a history of run-ins with police and issues with his neighbor, according to his lawyer.

Jarovlav Hanel, a native of the Czech Republic, faced eviction because the landlord wanted to move into the home where he had stayed for free in return for maintenance work, said his lawyer, Jonathan Burge.

Police said Hanel stabbed Lois Cain, the landlord who had filed court documents last week to evict him. After the stabbing, two Honolulu police officers were shot and killed, and the home and neighboring structures later burst into flames.

Honolulu police prepare to take defensive positions with their weapons after a shooting and domestic incident at a residence in Honolulu.  (Honolulu Star-Advertiser via AP)

Local media have not confirmed, but Hanel and another unidentified woman are presumed dead inside the destroyed home.

Burge said he knew Hanel had some mental health issues but had never known him to be violent.

“He thought the government was watching him all the time and tapping his phone, stuff like that,” Burge said.

Several years ago, a neighbor accused Hanel of shoving him. Hanel was acquitted of assault after a trial.

The fire, just a few blocks from oceanfront high-rise buildings, spread quickly, destroying seven homes and leaving others with fire or smoke damage.

Burge has represented Hanel since 2015 in various disputes with neighbors, including temporary restraining orders that three obtained against him. Hanel was facing a hearing next week on a charge of misusing 911 services, Burge said.

Cain was supportive of him in his disputes with neighbors, but she wanted him to move out so she could move into the home, Burge said. Their relationship had also soured because Hanel's dog had died and Cain wouldn't let him get a new one.

As of Monday evening, Cain remained missing while another woman believed to missing had been found safe, according to police.

"He thought he saw someone selling drugs nearby [and] called the police. They determined it wasn't happening," Burge said. "He didn't like their determination. He kept calling them until they told him stop” and cited him.