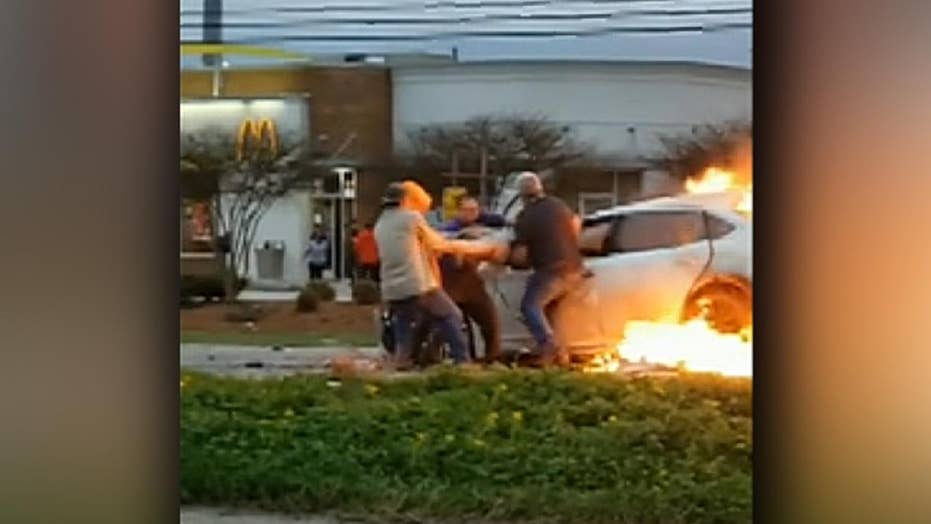 A group of good Samaritans are being hailed as heroes after rescuing a woman from a burning vehicle in Louisiana on Monday after it was struck by a suspected drunk driver.

Louisiana State Police told WBRZ-TV the crash was reported around 7 a.m. along Airline Highway in Garyville, about 40 miles west of New Orleans.

A motorist who was driving in the opposite direction, Anita Haley, began recording as four men ran up to the vehicle, which was engulfed in flames and smoke.

“Such bravery and compassion for someone in a desperate situation,” she wrote on Facebook. “God bless and reward all those involved in saving this woman’s life.”

The woman was transported to a local hospital with minor injuries, WBRZ reported.

At least one of the men suffered facial burns during the rescue, Trooper Melissa Matey told NOLA.com.

The other driver, 22-year-old Richard Preston, is now facing DWI, reckless operation of a vehicle, unauthorized use of a movable and first-degree vehicular negligent injury charges.

Authorities told NOLA.com they have the names of those who stayed on the scene after the crash but are trying to identify the other two who left.