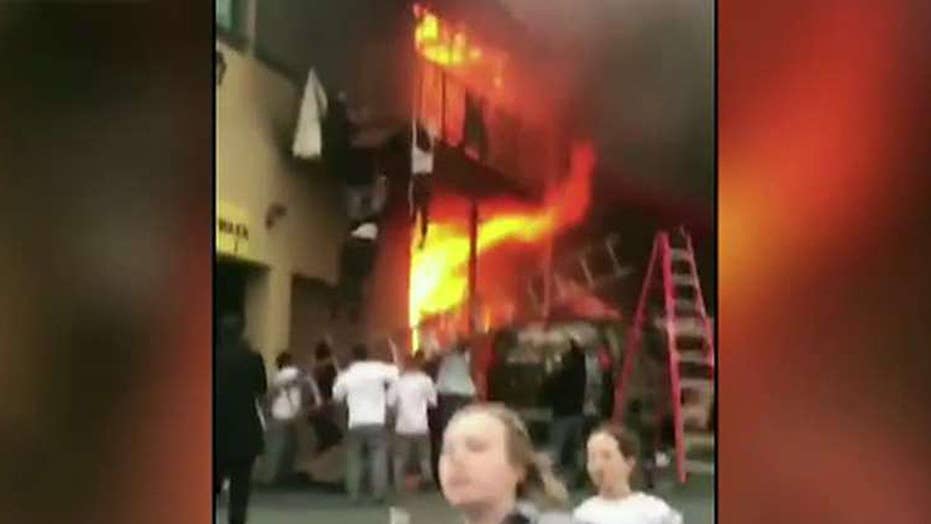 Several girls were forced to leap from a balcony to escape raging flames after a fire erupted in a New Jersey building Monday.

The fire broke out around 7 p.m. in the building, which is located in Edgewater, just across the Hudson River from New York City.

Video taken by a bystander shows the group of girls screaming and then jumping from the balcony to escape the blaze, as flames roar just feet away from them.

Business owner Tony Nehmi told NJ.com he and Edgewater Police Officer Jimmy Dalton were able to help some of the girls down with ladders before they fell.

"It was one of the bravest things I've ever seen," Mayor Michael McPartland told NorthJersey.com.

No serious injuries were reported during the escape, but 10 to 15 people suffered minor injuries while fleeing, McPartland said.

Nehmi told NJ.com he ran towards the building from his nearby business when he saw smoke, and he immediately saw two girls pounding on the windows on the second floor.

"I just wanted to get those two girls out, I never would have lived with myself if they got hurt," he said.

The fire was contained about two hours later, and is being investigated by authorities.

The building that caught fire houses multiple businesses including the dance studio and a hookah lounge.