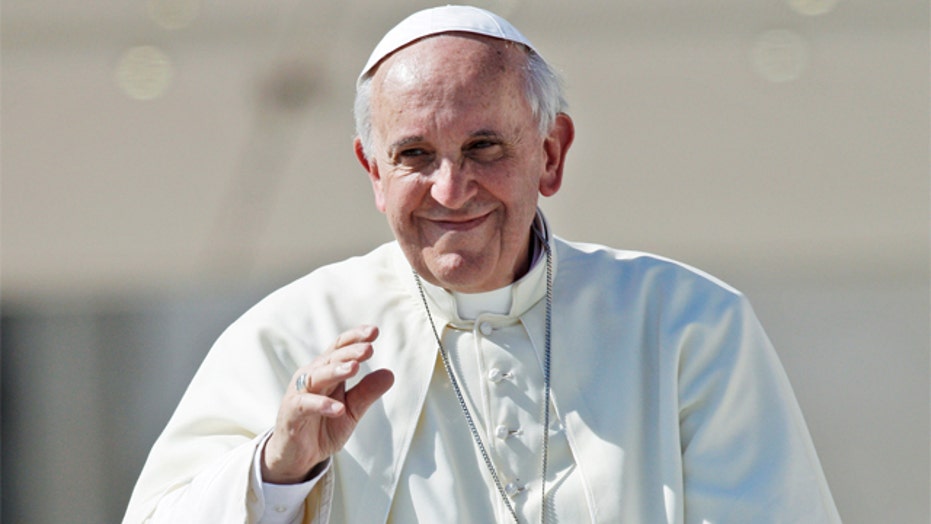 Openly gay Christians, a controversial nun who clashed with the Catholic Church and a transgender woman are reportedly among the invited guests greeting Pope Francis at the White House next week, a move that one Catholic activist calls “an ambush” and “political stunt.”

While it is unclear if gay former Episcopal Bishop Gene Robinson, gay Catholic blogger Aaron Ledesma, Sister Simone Campbell or biological man Vivian Taylor will have the opportunity to meet the pontiff face to face, the quartet's presence, along with many other guests, is seen by some as a visible nod to factions who would wish to nudge the Church left.

“This is definitely out of the ordinary,” said Michael Hichborn, president of the Catholic watchdog Lepanto Institute. “[President Obama is] trying to force the pope into a situation where it seems as if the Church is giving license to homosexuality and socialism.”

Francis has been somewhat of a Rorschach pope, his positive, but often ambiguous, statements being interpreted by those on the right or the left to mean what they want. But, Hichborn said, highlighting guests whose lifestyles are in opposition to the teachings of the Church threatens to turn the religious visit into political theater.

“You don’t treat the head of the Roman Catholic Church as a political toy in order to push your own agenda,” Hichborn told FoxNews.com.

White House spokesman Josh Earnest said Thursday no complete guest list has been released, and said a handful of names may not be representative of the full roster of invitees.

"I'd warn you against drawing a lot of conclusions of one, two or three people on the guest list because there will be 15,000 other people there," Earnest said.

Hichborn said he doesn’t expect Francis to address homosexuality outright during his U.S. visit because “he doesn’t tend to take things on directly.” But that approach has led to some confusion about where Francis stands on social issues.

Gay rights advocates often point to a 2013 statement Francis made as a sign the Church could be changing: "If someone is gay and is searching for the Lord and has good will, then who am I to judge him?" Traditionalists within the Church, however, will note that Francis affirmed same-sex relationships are contrary to church teaching.

Mixed messages also have been emanating from the World Meeting of Families, which Francis is scheduled to attend in Philadelphia on Sept. 26 and 27. A group of LGBT advocates have asked to meet with the pope while he’s in the City of Brotherly Love, a request to which the Vatican has yet to respond, according to the Boston Globe.

But gay Catholic Ron Belgau is a featured speaker at the Vatican-approved conference. While he’s pledged to remain chaste in order not to run afoul of the Church’s teaching on homosexuality, Belgau is also clear about his sexual orientation. Belgau told the Christian Times that he hopes to expand on what he sees as Francis’ message of inclusiveness.

Aaron Ledesma recently reconnected with the church and credits Pope Francis with beginning to break down walls for gay and lesbian Catholics. (AP)

Ledesma, too, has been inspired by Francis.

Robinson, who now serves as a senior fellow at the liberal think-tank Center for American Progress, has written that he hopes Francis’ actions grow to match his words.

“If Pope Francis is to be believed in all the kindly pronouncements of his first year (and I do), his good tone should be followed by the tough work of changing the systems of belief, doctrine and religious practice which perpetuate the victimization of those he seeks to serve,” Robinson wrote in a 2014 piece for the Daily Beast.

Campbell has not been actively involved with the gay rights issue, but is an eyebrow-raising pick to greet the pope because she publicly supported Obama's Affordable Care Act in opposition to the U.S. Conference of Catholic Bishops.

The list of controversial guests may be expanding, too.

Taylor, who was born a man but dresses and lives as a woman, told CNS News that she was allowed to bring five guests and has chosen three transgender people and two other individuals involved in the movement.

"I'm very happy to meet my brother in Christ, Pope Francis," Taylor said. "I'm glad we can bring some LGBT representation to the event."

Hichborn said he’s not sure how Francis will react if he’s confronted by the gay rights issue or a politically-driven agenda head-on.