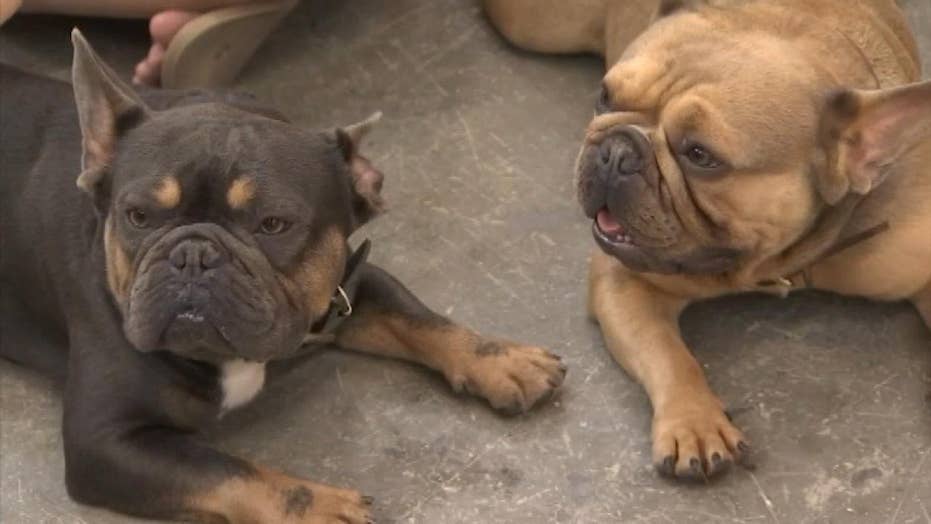 Five French bulldog puppies were stolen from a pet store in Arizona; 18 months later, two of them were found in California, police said.

Chris Kriaris told Fox 10 in Phoenix his dog was stolen on Jan. 10, 2018, when the animal was just a puppy. Surveillance video from that day showed two men leaving a mall in Tempe, about a 15-minute drive from Phoenix. The men stole five French bulldog puppies from Animal Kingdom Pet Store using a big trash can, according to Tempe police.

GROOM HAS HIS PET DOG AS HIS BEST MAN

The Tempe Police Department posted pictures of the stolen puppies on the department’s Facebook page last year, shortly after they were snatched.

Kriaris told Fox 10 he bought one of the puppies named “Goat” shortly before the dog was stolen but the pup was not allowed to leave the store at the time of purchase because it was on a 14-day hold while medicated.

"It was a horrible thing to go through," Kriaris told the television station. "Days went into weeks [and] weeks went into months - and you do lose hope."

Last week a woman in the northern California city of Antioch, about an hour's drive from San Francisco, found two of the five stolen dogs running in the street. Goat and Bruiser’s microchips reportedly flagged them as stolen and Kriaris' wife got the surprise phone call that the dogs had been located.

They decided they would take both dogs. “My wife says, ‘We’ll go pick them up right now,’” Kriaris said.

He told the media outlet he and his wife took a road trip the next day from Arizona to northern California and two-and-a-half days later they came back with Goat and Bruiser.

“I noticed when we first got to them that these two were inseparable and to break them apart is not an option,” Kriaris said.