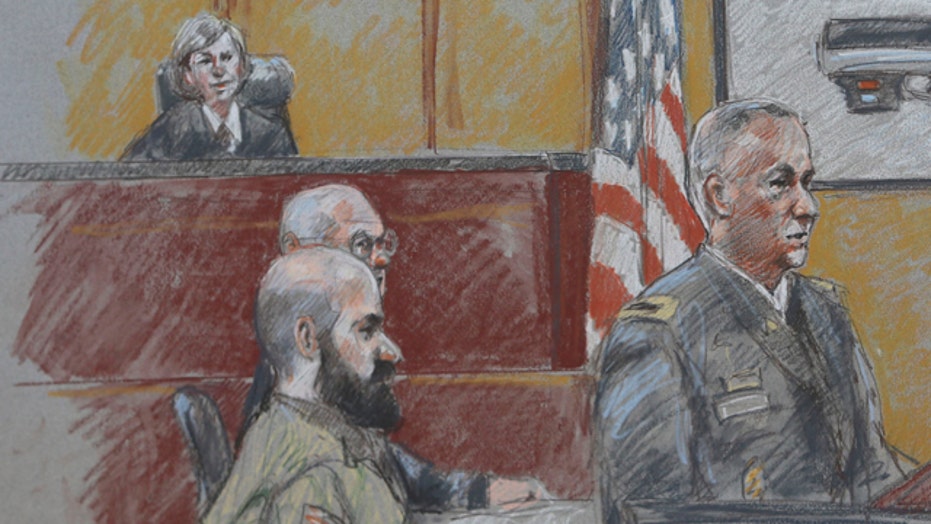 Fort Hood shooter allowed to continue to represent himself

Ford Hood gunman Nidal Hasan sat emotionless Thursday as witnesses and victims described a horrific scene of blood and chaos during his 2009 shooting rampage at the Texas base.

But he declined to cross-examine any of those who took the stand at his court martial despite a ruling by the military judge earlier in the day that he could continue to represent himself.

The lawyers assisting Hasan, called "standby attorneys," claim he is trying to get the death penalty and have said it would be "morally repugnant" to help him achieve such a sentence. Hasan admitted in his opening statement that he was the shooter, appearing to be trying to get himself convicted.

But judge Col. Tara Osborn said Thursday she believes this is "nothing more than their disagreement with Major Hasan's trial strategy," and ruled that the defense attorneys are required to stay on the case. The ruling prompted Hasan's lawyers to say they would appeal, claiming the judge was forcing them to violate professional rules of conduct.

Hasan's apparent death wish, which brought his court-martial to a temporary halt Wednesday, came as no surprise to veteran prosecutors who have handled high-profile cases involving terrorists.

Hasan is representing himself, but is advised by a team of attorneys appointed by the military court trying him for the Nov. 5, 2009, shooting at a Texas military base that left 13 dead and 30 injured. On Wednesday, members of his legal team told the military judge the former Army psychiatrist appears to be angling for the death penalty as he represents himself in the military trial.

The afternoon was characterized by testimony that shed light on the carnage that ensued during the shooting.

Sgt. Lamar Nixon testified that he went away for his desk for a minute, and when he came back he saw Hasan pull out a pistol, yell and start shooting.

“I saw people bleeding and screaming and he was shooting them,” Nixon said.

Former private Lance Aviles broke down in tears as he recounted the shooting, at one point staring at Hasan as he testified to the shooting of his colleagues.

Meanwhile, two soldiers who were shot during the 2009 rampage testified Thursday that they initially thought the gunfire was from a training exercise.

Staff Sgt. Michael Davis told jurors he hid under a desk when he realized the shooting wasn't a drill. He says he saw blood spray and someone get shot. He was shot in the back.

Spc. Alan Carroll says he thought he was hearing "a popgun." Carroll was shot in the shoulder and tried to save another soldier who died.

Their testimony was followed by emotional statements from other soldiers and employees, who recounted a horrific scene of blood and chaos and described encounters with some of the victims as they lay dying.

In a bizarre moment, Hasan interrupted one witness and asked that the judge remind her she is under oath.

The American-born Muslim told the jury he was a soldier who switched sides in what he described as a war between America and his Islamic faith.

Hasan, who wore green Army fatigues and a bushy beard, didn't cross-examine Lunsford. Earlier in the day, Hasan characterized himself as a "mujahedeen” and said the “dead bodies will show that war is an ugly thing.”

The trial is expected to take weeks and possibly months, as many of the more than 30 people wounded in the deadliest attack on a U.S. military installation could take the witness stand.