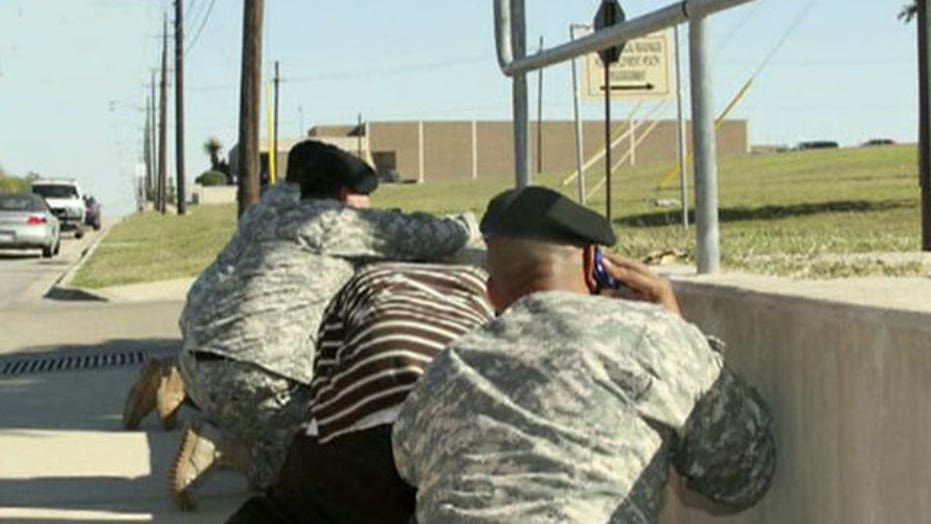 Survivor speaks out on long ordeal

A military jury sentenced Maj. Nidal Hasan to death Wednesday for killing 13 people during the 2009 shooting rampage at Fort Hood.

Hasan, who sat motionless as the jury president read the verdict, has said he acted to protect Islamic insurgents abroad from American aggression, never denied being the gunman. In opening statements, he acknowledged to the jury that he pulled the trigger in a crowded waiting room where troops were getting final medical checkups before deploying to Iraq and Afghanistan.

Hasan had one final chance Wednesday to give a closing argument before his case went to the jury, but he declined -- continuing an absent defense that he has used since his trial began three weeks ago.

The Army psychiatrist's behavior has only stoked suspicion that his ultimate goal is martyrdom, in the form of a death sentence that would allow him to fulfill what prosecutors have described as a &quotjihad duty&quot under his Islamic faith.

The lead prosecutor, Col. Mike Mulligan, told jurors Wednesday morning that history was full of instances of death in the name of religion. But he said it would be &quotwrong and unsupportive&quot to tie Hasan's actions to a wider cause

&quotYou cannot offer what you don't own; you cannot give away what is not yours. He can never be a martyr because he has nothing to give…..Do not be misled; do not be confused; do not be fooled. He is not giving his life. We are taking his life. This is not his gift to God, it's his debt to society. He will not now and will not ever be a martyr. He is a criminal, a cold-blooded murderer. On 5 November he did not leave this earth, he remained to pay a price. To pay a debt. The debt he owes is his life,&quot Mulligan said.

Mulligan focused on the victims, insisting that Hasan deserved to be executed for the attack at the Texas military base that also wounded more than 30 people.

A few minutes after Mulligan finished, Hasan said he had no closing statement.

Hasan has been representing himself during the trial, and his lack of defense has caused problems with the military defense attorneys ordered to help him.

But legal experts say he has a nearly unshakable right under the Sixth Amendment of the U.S. Constitution to represent himself. The military judge, Col. Tara Osborn, has repeatedly warned him about the danger of being his own attorney, and the three lawyers assigned to help him have tried to step in at least twice.

&quotMaj. Hasan is the captain of his own ship,&quot she said.

Any lawyer trying to save Hasan would have a daunting task. In two days of sentencing, prosecutors called widows, parents and other loved ones of the people Hasan killed. They offered a picture of their overwhelming grief and struggle to move forward after his attack. At least one juror appeared visibly emotional during parts of testimony.

Osborn revealed some of what Hasan's standby attorneys wanted to tell jurors as she reviewed and denied their motion. Among that evidence includes his good behavior in custody before trial and his offer before trial to plead guilty -- which was rejected under military rules because prosecutors are seeking a death sentence.

But Hasan was dismissive of his standby attorneys' attempts. He repeatedly objected, and as one of them asked to argue the motion, he commented that he had &quotoverzealous defense counsel.&quot

Osborn is &quotin a tough situation, no matter what happens,&quot said Victor Hansen, a military law expert at the New England School of Law, in an interview earlier this month. &quotAt the end of the day, the defendant has the absolute right to decide who's going to represent him, including deciding to represent himself.&quot

Hasan rested his case shortly after more than a dozen widows, mothers, fathers, children and other relatives of those killed testified about their lives since the attack. They talked of eerily quiet homes, lost futures, alcoholism and the unmatched fear of hearing a knock on the door.

The same jurors who convicted Hasan last week had just two options: either agree unanimously that Hasan should die or watch the 42-year-old get an automatic sentence of life in prison with no chance of parole.

Hasan could become the first American soldier executed in more than half a century. But because the military justice system requires a lengthy appeals process, years or even decades could pass before he is put to death.

For nearly four years, the federal government has sought to execute Hasan, believing that any sentence short of a lethal injection would deny justice to the families of the dead and the survivors who had believed they were safe behind the gates of the Texas base.

And for just as long, Hasan has seemed content to go to the death chamber for his beliefs. He fired his own attorneys to represent himself, barely put up a defense during a three-week trial and made almost no effort to have his life spared.

Mulligan reminded the jury that Hasan was a trained doctor yet opened fire on defenseless comrades. He "only dealt death," the prosecutor said, so the only appropriate sentence is death.

He was never allowed to argue in front of the jury that the shooting was necessary to protect Islamic and Taliban leaders from American troops. During the trial, Hasan leaked documents to journalists that revealed him telling military mental health workers in 2010 that he could "still be a martyr" if executed.

When Hasan began shooting, the troops were standing in long lines to receive immunizations and doctors' clearance.

Thirteen people were killed and more than were 30 wounded. All but one of the dead were soldiers, including a pregnant private who curled on the floor and pleaded for her baby's life.

The attack ended only when Hasan was shot in the back by an officer responding to the shooting. Hasan is now paralyzed from the waist down and uses a wheelchair.

Death sentences are rare in the military, which has just five other prisoners on death row. The cases trigger a long appeals process. And the president must give final authorization before any service member is executed. No American soldier has been executed since 1961.

Hasan spent weeks planning the Nov. 5, 2009, attack, including buying the handgun and videotaping a sales clerk showing him how to change the magazine.

He later plunked down $10 at a gun range outside Austin and asked for pointers on how to reload with speed and precision. An instructor said he told Hasan to practice while watching TV or sitting on his couch with the lights off.

When the time came, Hasan stuffed paper towels in the pockets of his cargo pants to muffle the rattling of extra ammo and avoid arousing suspicion. Soldiers testified that Hasan's rapid reloading made it all but impossible to stop him. Investigators recovered 146 shell casings in the medical building and dozens more outside, where Hasan shot at the backs of soldiers fleeing toward the parking lot.

In court, Hasan never played the role of an angry extremist. He didn't get agitated or raise his voice. He addressed the judge as "ma'am" and occasionally whispered "thank you" when prosecutors, in accordance with the rules of evidence, handed Hasan red pill bottles that rattled with bullet fragments removed from those who were shot.