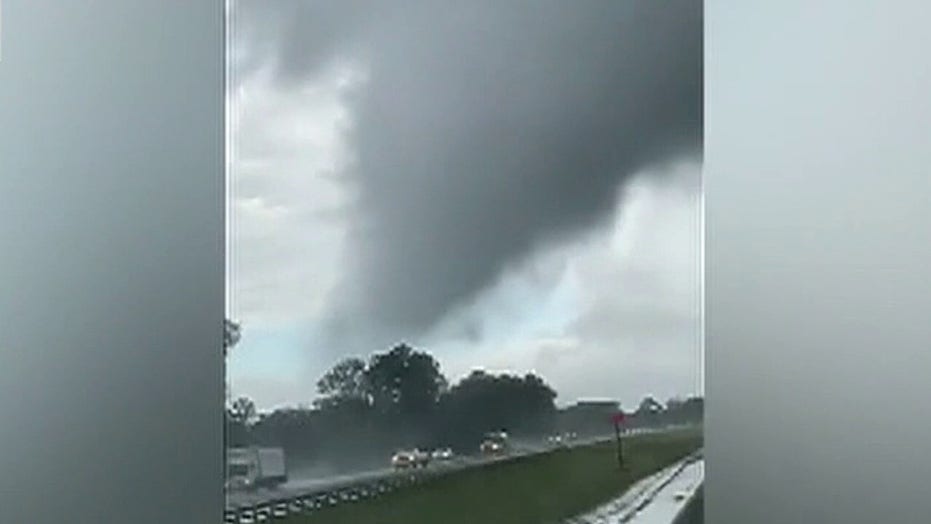 A tornado is spotted by drivers near Ocala, Florida.

A tornado swept across a major interstate highway in Florida as severe weather slammed the state Monday, sending a construction trailer and portable building soaring.

The National Weather Service (NWS) office in Jacksonville said the tornado touched down around 9:40 a.m. near the Ocala weigh station on Interstate 75 in Marion County, then raced northeast for 11 miles.

As the tornado crossed Interstate 75, winds lifted a construction trailer, tossing a 36-foot portable building over the northbound side of the highway.

The Florida Highway Patrol's Gainesville station said the building crashed onto the shoulder.

A portable building was smashed on the side of Interstate 75 near Ocala, Fla., on Monday after it was tossed by a tornado. (Florida Highway Patrol)

"Thank God nobody was killed or injured!" police tweeted.

The portable trailer before it was destroyed by the tornado. (Florida Highway Patrol)

The driver of the pickup truck pulling the trailer, a 48-year-old Ocala man, suffered minor injuries after the building clipped his vehicle, but did not require hospitalization, police later told FOX13.

The storm was captured on videos by several motorists. They showed the gray funnel twisting across the highway as vehicles slammed on their brakes to avoid it.

“Look at those clouds getting sucked up,” said one motorist in a video filmed by Seth Raper. “No way!”

The NWS said that after the tornado crossed the highway, it snapped "numerous trees" before traveling 11.5 miles, and causing minor roof and window damage in the area.

The twister in Marion County has a preliminary rating of EF-0, with peak winds of 85 mph.

Debris on Interstate 75 after a tornado crossed the major highway on Monday near Ocala, Fla. (Florida Highway Patrol)

According to the National Severe Storms Laboratory, the most common way to determine the strength of a tornado is estimating wind speeds by assessing the damage caused. The Enhanced Fujita Scale or EF Scale, used since 2007, is the National Weather Service's method to rate tornadoes.

The EF scale uses indicators, including damage to different types of structures such as barns, mobile homes, trees and schools, according to the NWS forecast office in Norman, Okla.

The Storm Prediction Center said EF-0 tornadoes are considered "weak," with winds between 65 to 75 mph. Twisters in this lowest category create "minor" damage.

Another tornado was reported in the Orlando area on Monday near Sanford. The Orlando Sanford International Airport said on Twitter that it was "up close" to the storm, which was a few miles from the airport.

The storms also left trees and power lines down in the city of Deland. There were no immediate reports of injuries there.

The storm system behind the violent weather in Florida was blamed for at least two deaths across the South.