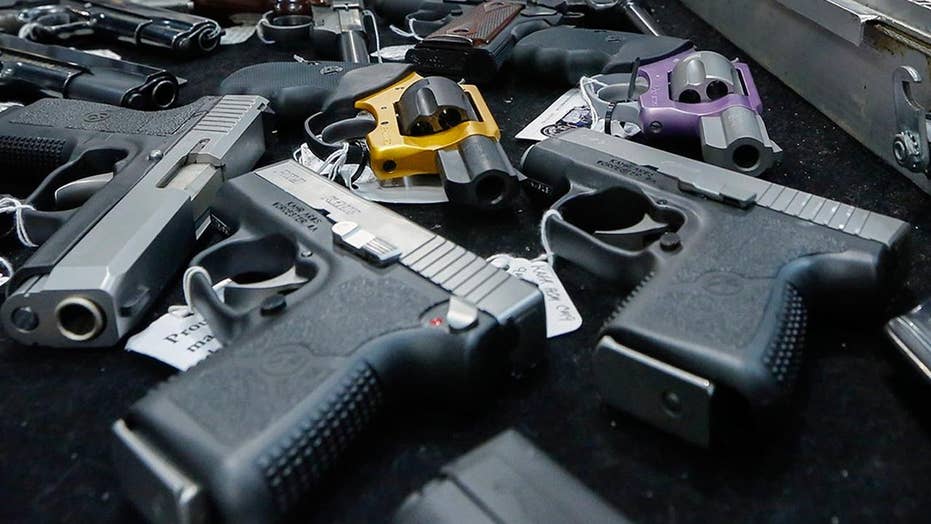 Mass shootings in the US: A timeline

Parkland high school shooting: A timeline of the other tragic, deadliest mass killings in the United States from Pulse to the University of Texas clock tower massacre

After each massacre, survivors and witnesses have echoed the words “no more” — yet mass shootings have continued to plague the U.S.

In fact, shootings only have continued to increase over the past few years.

Wednesday’s shooting at Marjory Stoneman Douglas High School is the third deadliest shooting in modern U.S. history to take place within the past five months.

It’s also the 25th fatal shooting at a U.S. elementary, middle or high school since — and including — Columbine in 1999.

Here’s a look back at the 10 deadliest shootings that the country ever has seen as the nation mourns yet another tragedy.

Gunman Stephen Paddock fired at a Las Vegas concert from the 32nd floor of the Mandalay Bay Hotel and Casino on Oct. 1, 2017, killing 58 people. (Getty Images)

Authorities say gunman Stephen Paddock fired at the Route 91 Harvest Festival concert on the Las Vegas Strip from the 32nd floor of the Mandalay Bay Hotel and Casino on Oct. 1, 2017, killing 58 people and wounding more than 520 others.

It was the deadliest shooting in modern U.S. history, police said. Twenty-one victims were shot in the head, 36 died with chest and back wounds and one died of a gunshot to a leg, according to a coroner’s report.

SWAT teams who stormed Paddock’s room discovered the 64-year-old dead of a self-inflicted gunshot to the mouth, the report adds.

A gunman fatally shot 49 people and wounded more than 50 others when he opened fire inside Pulse nightclub, a gay Orlando club, in 2016. (Reuters/Scott Audette)

Omar Seddique Mateen killed at least 49 people and wounded more than 50 others when he opened fire in Pulse, a gay Orlando nightclub, on June 12, 2016. Mateen eventually was killed by police after a standoff.

That was the deadliest mass shooting in modern U.S. history prior to the Las Vegas attack.

Members of the Blacksburg, Va., community hold a candlelight vigil five years after a mentally ill student went on a killing rampage around Virginia Tech's campus in 2007. (Reuters/Chris Keane)

Virginia Tech student Seung-Hui Cho fatally shot 32 people in two locations of the school’s Blacksburg, Va., campus in April 2007, before killing himself with a bullet to the head.

Many of the victims had defensive wounds, indicating they tried to shield themselves from the gunfire, but there was no evidence that Cho struggled with any of the people he killed.

A makeshift memorial in Newtown, Conn., stands in honor of the 20 children and six adults Adam Lanza killed at Sandy Hook Elementary School in 2012. (Reuters/Mike Segar)

“In fewer than 11 minutes, twenty first-grade pupils and six adults had lost their lives,” a police report released after the massacre reads.

He killed 26 people, including an unborn baby, and injured another 20.

Kelley, 26, died of an apparent self-inflicted gunshot wound after he was shot and chased by two men who heard the gunfire at the church and chased after him in a vehicle.

Investigators said the attack appeared to stem from a domestic dispute involving Kelley and his mother-in-law, Michelle Shields, who sometimes attended services at the church. Kelly sent several disturbing text messages to Shields prior to the shooting.

“I suggest you don’t test my resolve,” read one of several texts.

In New Mexico, he was kicked out of the Air Force following a court-martial in 2012 for abusing his first wife and reportedly hitting her child hard enough to fracture his skull. In Colorado, he was charged with misdemeanor animal cruelty after someone saw him punch a dog several times.

And in Texas, sheriff’s deputies were called to his parents’ house after his girlfriend told a friend he was abusing her.

“You had to walk on eggshells around him all the time because you’re afraid of saying something to upset him,” Shields told the San Antonio Express-News months after the attack.

George “Jo-Jo” Hennard, an unemployed merchant seaman, shot and killed 23 people and wounded 27 others during the lunchtime rush at Luby’s Cafeteria in Killeen, Texas, on Oct. 16, 1991.

Hennard killed himself shortly after the rampage.

During the attack, Hennard reportedly targeted women, whom he called “vipers.”

James Huberty fatally shot 21 people and injured more than a dozen others after he went on a shooting rampage in a San Ysidro, Calif., McDonald's restaurant in 1984. (Reuters/Mike Blake)

On July 18, 1984, James Huberty, 41, fatally shot 21 people and injured 19 others in and around a McDonald’s restaurant in San Ysidro, Calif. Among the dead were children and teenagers.

Huberty later was killed by a SWAT sniper.

The shooting suspect, who was identified as 19-year-old Nikolas Cruz, had been expelled for disciplinary reasons.

An Instagram page apparently belonging to Cruz showed pictures of guns and knives.

One student told WJXT that “everyone predicted” the shooting and some teachers acknowledged there were warning signs. However, Superintendent Robert Runcie said he was not aware of any specific warnings the school district had received regarding the shooter.

The husband and wife duo who fatally shot 14 people at a holiday party in San Bernardino, Calif., in 2015 were killed by police during a shootout. (AP Photo/Jae C. Hong)

On Dec. 2, 2015, husband and wife Syed Rizwan Farook and Tashfeen Malik opened fire at a holiday party in San Bernardino, Calif., killing 14 people and wounding 22 others.

After the shooting, the couple was shot by more than two dozen police officers more than 40 times combined, and killed.

Autopsies found that Farook was shot 27 times, and Malik was shot at least 15 times.

Whitman, a former Marine who had earlier murdered his mother and wife, killed 14 and wounded 31 before he was gunned down by police.

Whitman fired at people from his perch on the tower for more than an hour.