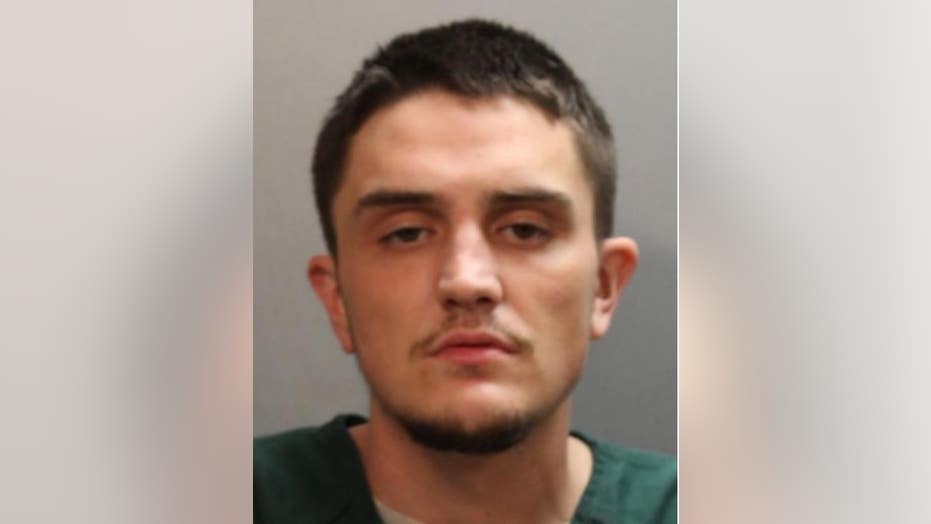 A Florida man who allegedly watched a woman die from a fentanyl overdose, then loaded up his van with electronics from her apartment is facing first-degree murder and other charges, according to prosecutors.

Kyle Austin Pollett, 26, is a repeat offender now accused of killing Lauren Jaffe with a dose of fentanyl and then smashing her home security system on Jan. 20.

Court documents allege that he attempted CPR on Jaffe after she became unresponsive but abandoned his efforts before stealing her TV, computer and phone and breaking several surveillance cameras around the home. At no point did he call for help or report Jaffe’s medical emergency, according to prosecutors.

Kyle Austin Pollett is accused of killing Lauren Jaffe with a dose of fentanyl and then smashing her home security system on Jan. 20. (Jacksonville Sheriff's Office)

However, as he was allegedly smashing cameras, according to investigators, they were recording him both inside and outside the house.

With Jaffe passed out, Pollett allegedly loaded her computer into his van, then returned to the house with a hammer and wearing a mask.

"Pollett is seen walking to the front door and noticing the Ring doorbell camera," according to court filings. "Pollett then turns away and puts a mask on his face and walks to the front door."

He allegedly smashed the first camera with the hammer, threw another underwater and appeared to stuff a third into the freezer, although investigators never found that one.

Jaffe's roommate used the Find My Friends app to locate that last position of her phone before it had been turned off. The victim was pronounced dead at the hospital around 11 a.m. on the day she died, according to authorities. Meanwhile, her phone’s last ping appeared at an address on Dignan Street, about 20 miles away, more than an hour later.

The roommate told Fox News Digital she did not know Pollett but believed he may have been an acquaintance of the vicitm.

When police found Pollett's 2003 Ford van later that evening, they allegedly recovered crack cocaine and fentanyl in an Altoids container inside.

Police said Pollett admitted to visiting Jaffe’s residence but claimed it was only to buy a virtual reality headset from the victims.

"Pollett declined to answer any further questions once he was confronted about the Ring camera surveillance footage," according to court documents.

His attorney could not immediately be reached for comment.

Court records show Pollett was also convicted of possessing heroin and giving a fake name to police in Clay County in 2018 and sentenced to time served. He faced several other charges over the years, including a marijuana charge and for the alleged assault and battery of a girlfriend in 2017.

In that case, he allegedly took the victim's phone and hit her in the face when she tried to get it back. Then, according to court documents, "the victim was face down on the bed and the suspect jumped on top of her and started punching her with closed fists on her sides and back."

He was on probation for attacking the same victim at the time, according to court documents.

In 2013, he was accused of stealing a woman's iPhone out of her purse in a supermarket. He was out on bond for another burglary

As Fox News Digital has reported, Nelson's office has cracked down hard on repeat offenders, seeking the stiffest penalties possible for them and leading to a drop in violent crime in her community, which runs counter to spikes in other big cities across the country.